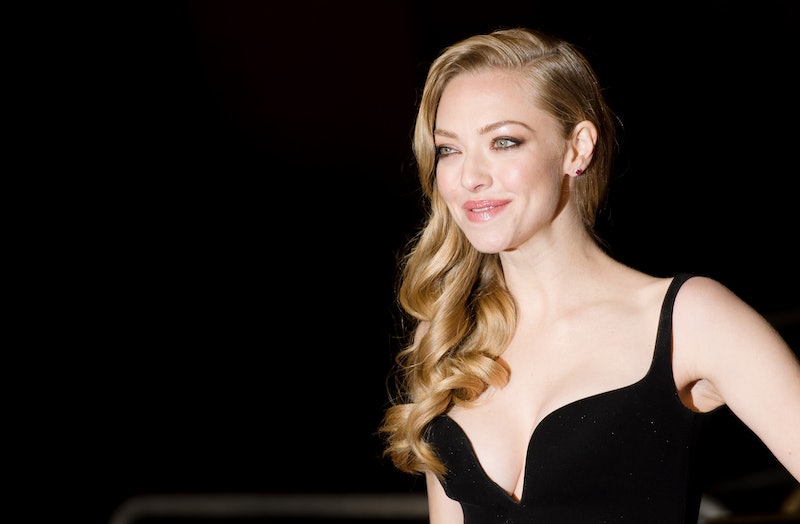 It may be a film about a grown man and his talking teddy bear, but surprisingly, one of the most compelling moments in Ted 2 has nothing to do with their saga, but rather, a musical interlude by co-star Amanda Seyfried. Partway through Ted 2 , Seyfried sings a gorgeous song during a scene that finds Mark Wahlberg's John, Seyfried's Sam, and Seth MacFarlane's Ted seated at a campfire, sidelined by car troubles. To pas the time, Sam strums away on a guitar while singing “Mean Old Moon,” a crooner penned by director and Ted-voicer MacFarlane. It's a beautiful performance, and one that might take some fans by surprise, or have them doubting who actually provided the vocals. Spoiler alert: Amanda Seyfried really can sing.

Well, if you're a fan of musicals, you're probably aware that Seyfried's songstress abilities have been evidenced throughout her career. Her campfire solo in Ted 2, however, was an unexpected (and very welcome) moment. As for how it came to be, the actress told Broadway.com that MacFarlane actually wrote the song with her in mind (frequent MacFarlane collaborator and Ted composer Walter Murphy co-wrote). Said Seyfried, “Seth and I are definitely in cahoots in terms of music."

Ted 2 was just Seyfried's second collaboration with MacFarlane — she co-starred in last year's A Million Ways to Die in the West, also directed by him. But it was far from the first time she lent her vocal talents to her screen work. A trained soprano, Seyfried stunned audiences with her performances as Cosette in the film adaptation of Les Misérables and as Sophie in the big-screen version of Mamma Mia!, and on stage, she recently debuted off-Broadway in Neil LaBute's The Way We Get By. Now, reports indicate that she's gunning for a role as Glinda the Good Witch in the upcoming adaptation of Wicked . She's been quite vocal about this aspiration for several years now, and told Screen Rant that she's “not going down without a fight.”

We're hoping there won't be too much contest — Seyfried is primed for the role and would make a marvelous successor to Kristin Chenoweth's groundbreaking work in the original Broadway cast. If the sum of her stage and film work is any indicator, she is definitely the woman for the job in a new Broadway-to-film crossover. Yet even if she doesn't get the part, she definitely needs to do more movie musicals, and these clips prove she's up for the challenge.

1. When She Sang This Gorgeous Cover Of "Li'l Red Riding Hood"

2. When She Hit That High Note In Les Mis

Successful movie musicals Mamma Mia! and Les Misérables found Seyfried as the leading lady — with the vocal challenges to match. In particular, the film adaptation of Les Mis was notorious for director Tom Hooper's choice to have his actors sing their parts on camera, instead of matching a lip-sync to a voice-over track. Though Anne Hathaway stole the show (and much of the critical attention) with “I Dreamed a Dream,” Seyfried more than held her own — and easily outpaced her duet partner Eddie Redmayne — when she nailed that high B-flat in “A Heart Full of Love.”

3. When She Wrote And Sang "Little House" For Dear John

Seyfried has steadily accumulated roles that challenge her range of expression and emotion. Critic A.O. Scott wrote of Dear John (above) that she's “a resourceful and engaging young actress industriously turning herself into a movie star.” For the film's soundtrack, she wrote and recorded “Little House,” and plays a portion of it on screen.

4. When She Absolutely Killed It In Mamma Mia

Seyfried has earned spots in massive blockbusters and television dramas and seemingly everything in between (we loved her in Mean Girls , where she played stereotypical bimbo Karen with verve, but equally in her flashback sequences of Veronica Mars , where she appeared as Lilly Kane). One of her all-time best roles, though, was as Sophie in Mamma Mia. Wasn't she great?

Seyfried does it all, her work demonstrating a commitment to her craft that merits such a coveted role as Glinda, or any major part in another musical. Here''s hoping that Seyfried gets the role and so many more, as Ted 2 and so much more have shown, she couldn't be a better choice.

More like this
Yes, That's Lindsay Lohan's Sister Singing In The 'Falling For Christmas' Movie
By Radhika Menon
The 'Love, Lizzo' Harry Styles Scene Is Just 1 Moment That Made Fans Feel Seen
By Brad Witter
This James Bond Event At Abbey Road Studios Was A 007 Fan's Dream
By Samantha Rollins
Celine Dion Reveals She’s Been Diagnosed With Stiff Person Syndrome
By Jake Viswanath
Get Even More From Bustle — Sign Up For The Newsletter