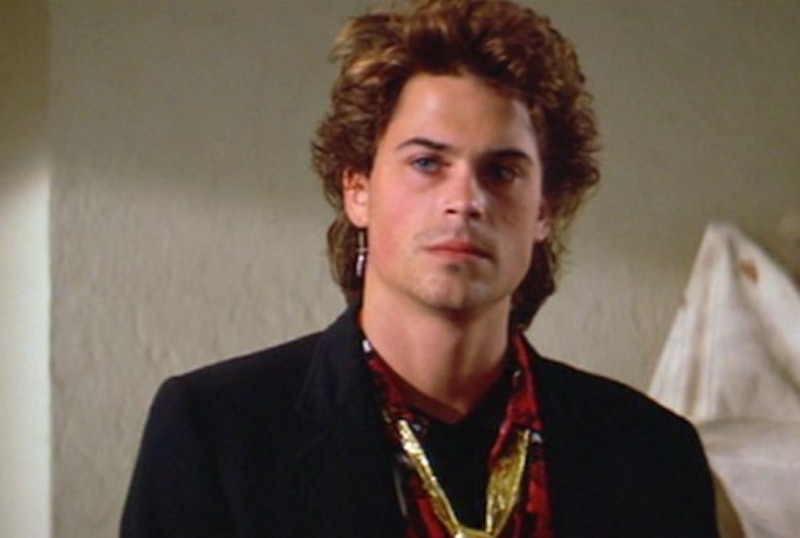 St. Elmo’s Fire is one of the best films of the 1980s Brat Pack era, but I really feel as if it’s not given its due. Maybe it’s because the story features characters that are no longer in high school (or even college), or perhaps it’s that Joel Schumacher directed the film (instead of John Hughes, who was known for directing the Brat Pack movies), but St. Elmo’s Fire isn’t lauded like Sixteen Candles or The Breakfast Club. This is a grave mistake: Not only does it feature an amazing cast, but it also boasts one of the best accessories in a movie, ever: Rob Lowe’s dangling earring.

Released in 1985, St. Elmo’s Fire starred Rob Lowe, Emilio Estevez, Demi Moore, Judd Nelson, Andrew McCarthy, Mare Winningham, and Ally Sheedy as a group of best pals that have just graduated from Georgetown University. They are, as most young adults do, having a hard time adjusting to the responsibilities of their grownup lives, and, of course, chaos ensues. There’s drug abuse. There’s cheating. There’s betrayal. There’s a divorce. There’s a killer saxophone solo. There’s Judd Nelson as a pro-Reagan Yuppie. There’s some screaming on a roof and some virginity losing and oh, a lot of Spanx, before Spanx were actually Spanx. Basically, the movie really covers all of your bases of a coming-of-age film, and then some.

My favorite part? The best jewelry of the 1980s: Rob Lowe’s earring. Who would have known that that piece of jewelry — a staple of the 1980s scene — would look better on Rob Lowe than it did on Madonna? In the film, Rob Lowe plays Billy, the ne’er-do-well party boy with a heart of gold and a kid and a wife he seems to forget about an awful lot. Billy’s character is pretty infuriating (the only one worse is Demi Moore’s spoiled brat Jules, who is a coke fiend), but at least he matures a bit toward the end. You can’t say “spoiler alert” on a 30 year-old movie, but St. Elmo’s Fire is worth watching, and I wouldn’t want to ruin it.

In any case, that flawless, dangling cross earring steals the show, conveying every subtle emotion and acting as a secondary player to the storyline. Just look at how much that earring has put forth.

The earring liked to party…

But it could also be quiet and caring, especially when taking a lady’s virtue

The earring is in touch with its feelings…

And it has no problems riding in the way, way back of an overcrowded Jeep (the humility!)

When it smiles at you, the whole world stops

The earring loves to joke…

Even though sometimes, it can be a little crude

The earring plays a mean saxophone

See what I mean? Watch the movie, and then we can go to the mall and pick out some matching jewelry together.