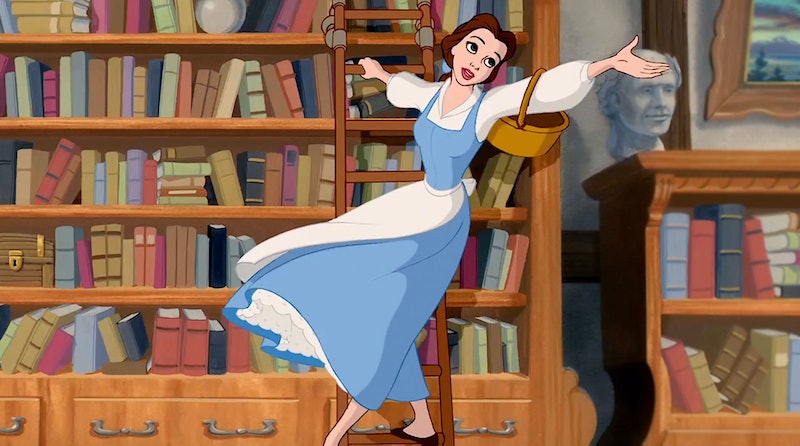 There are some seriously amazing women in literature: Elizabeth Bennet, Hermione Granger, Lisbeth Salander — the list goes on and on. The truth is, though, that we're had strong female characters to look up to forever. Before some of us could even read, there were Disney princesses. And tell me, who didn't grow up just dying to shop in Belle's bookstore, or chop off her hair and go to battle like Mulan?

Fictional women have a way of influencing us long after we think they can. While Mulan can teach us bravery, Hermione can teach us to be smart and proud of it, and, of course, so many of these fictional characters share our very own love of reading. And you don't just have to choose books or princesses; believe me, you're never too old for Disney or a good book. I mean how boring would that be?!

What if our favorite literary ladies and our favorite Disney princesses were one and the same? Some of them are so similar, it's hard to believe they aren't the same! Jo March didn't want to sit idly by and let the men see all the action, and neither did Mulan. Hester Prynne made the best of her isolation, and Elsa didn't have a problem with Letting Go of her life, either. Here's what would happen if 9 literary heroines collided with Disney princesses.

Their love for reading and books, the knowledge that they are just fine on their own, thank you very much, and a devotion to their father makes Elizabeth Bennet and Belle just about the same person, if you ask me. Mr. Darcy might not have been a beast, but Gaston sure did have a lot of pride.

Jo March believed that women should be able to do anything men could do and then some, but she was born in the wrong time for those convictions. Mulan took her traditional background and threw it out the window. "I'm dying to go and fight with Papa, and I can only stay at home and knit, like a poky old woman.” Quick, was this quote said by Jo March, or Mulan?

Sure, Hester was banished from her village for adultery, but she took it in stride, and made her own life all on her own. Elsa left Arendelle before she could be sent away, deciding to take matters into her own hands. These two self-proclaimed loners would definitely have a lot in common.

Katniss and Snow White both have a connection with nature. They both have bad luck when it comes to fruit: berries and apples, not the best snack choice for these two! From the Arena, to Effie Trinket, to an evil queen, they have no problems facing whatever comes their way.

Yes, I know, Scout's hair is way short in comparison to Rapunzel, but first of all, she cuts it at the end. Second, and more importantly, both ladies are determined to finding out the truth, and both lose their innocence at a young age. Fortunately, Scout has Atticus to guide her, but Rapunzel does just fine on her own (with a little help from her pal Flynn Rider, of course).

Scarlet O'Hara and Merida both had some serious reservations about being married off to a man. "Marriage, fun? Fiddle-dee-dee. Fun for men you mean." Scarlet wanted to exercise her independence, and so did Merida. They are strong, independent women who clearly do not need men!

From rags to riches, Eliza and Cinderella have a lot in common. Although Eliza had a man and a voice coach rather than a fairy godmother, it was still pretty much the real life equivalent!

Young girls who want to do and see so much more than their over protective (but well intentioned) fathers will allow. Arya wants a piece of the action, Ariel wants a piece of a world she's never known. Arya and Ariel could share some serious eye-rolls over their fathers, and definitely swap some sneaking out tips.

Island of the Blue Dolphins is an underrated book, and Pocahontas is an equally underrated Disney movie, in my opinion. These two both have a serious love of the land, and a bond with animals and mother nature that is pretty unrivaled in literature and Disney movies.