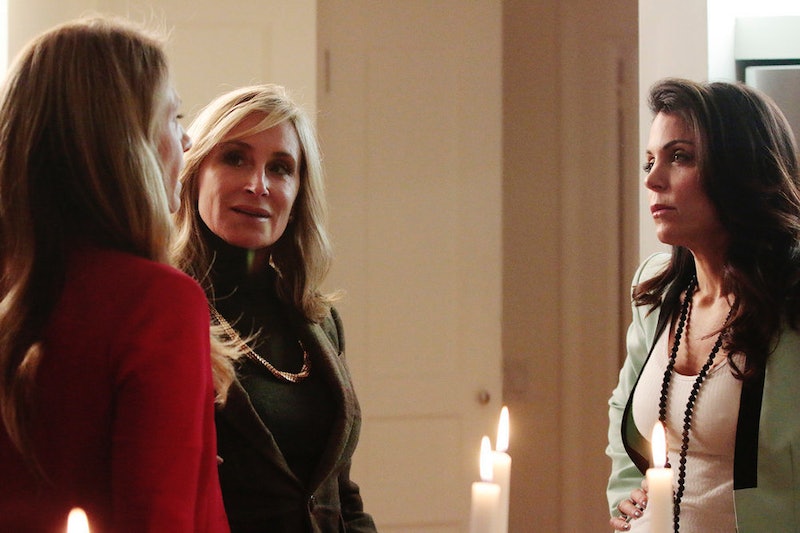 OK. So the trip to Turks and Caicos may have gotten off to a rough start for The Real Housewives of New York City . However, after a few cocktails, some fun in the sun, and a dip in the pool, you would think that they would be ready to let the good times roll for the rest of the vacation. Well, Bethenny Frankel had to get something off of her chest about Sonja Morgan's drinking, and it definitely did not make for happy times for the ladies' first dinner in Turks and Caicos.

If you've seen RHONY before, you know that Sonja is a bit of a party girl. OK, she's very much a party girl. Don't get me wrong. This makes for great TV. However, her drinking seems to have gotten worse in recent seasons to the point where it seems like she's drinking to excess to escape real life and forget about her personal life and legal troubles.

Bethenny confronted Sonja about this right before dinner during the ladies' first night in Turks and Caicos. However, this was such bad timing on her part, not only because they were probably starving but also because Sonja had just felt majorly attacked by the other Housewives when they brought up that she had nearly made out with the boyfriend of one of Luann de Lesseps' friends. Sonja said that was hearsay and accused the other women of not being friends but being judgmental.

So Bethenny thought this would be a good time to try to get through to Sonja and make her see that she has some issues she needs to deal with, one of them being overdoing it in the drinking department. Unfortunately, Sonja does what she always does: not listen because she's too busy talking the whole time, making excuses for what she thinks others are accusing her of. It got to the point where Bethenny had to say "Shut the f--k up" a few times just to get Sonja to take a breath.

However, even that didn't do much to enlighten Sonja, who said she was annoyed at Bethenny until she realized she was just venting her frustrations with the other Housewives to her, which we all know is not at all what she was doing.

None of the other Housewives were surprised about this result. They weren't really quite sure why Bethenny would go to all that effort because they have all tried and failed to make Sonja see the light in the past. I suspect that this will be the last time Bethenny tries as well, especially since it looks like there's going to be some serious fallout from their conversation during next Tuesday night's episode of RHONY. I wouldn't expect anything less.