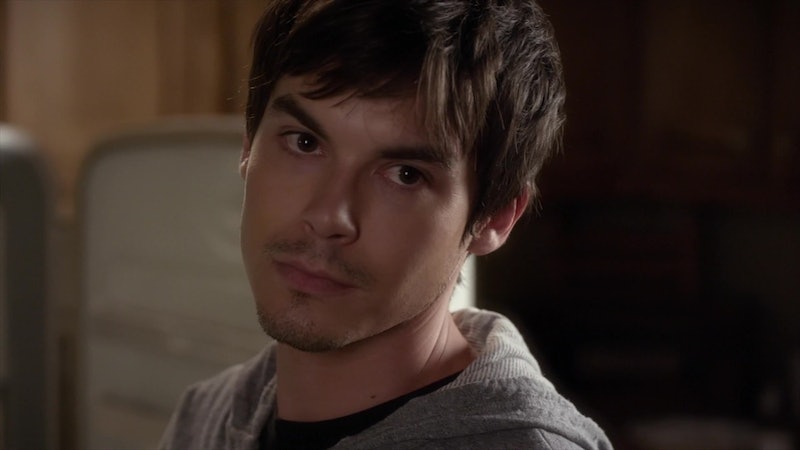 Let's just get right to the matter at hand. I feel horrible even suggesting this, but is there any chance that Caleb is Charles on Pretty Little Liars ? I know, just thinking about the possibility broke my heart into a million tiny pieces. Through this A ordeal, he's always been the one I've held in the highest regard. It's Caleb! While Toby joined the A Team for a little bit (even though it was all to protect Spencer), Ezra became super-shady and was revealed to be writing a tell-all book about Ali, and Paige tried to drown Emily in a pool that time, Caleb has stood above all of the Liars' significant others. He has been a shining beacon of #RelationshipGoals for all of us, and now that he's being all weird and moody, the idea that he's A is certainly going to come up among fans. But listen, good people of the world (and Rosewood), there is absolutely no way Caleb is Charles. Trust me. I swear on my Haleb loving heart.

Remember when Hanna got out of the Dollhouse, and literally LEAPED into his arms on the outside? Since then, Caleb has been very over protective of Hanna, maybe a little too much. But there's a reason for it. He just loves her so much, he doesn't want to ever let her out of his sight, and he most certainly doesn't want to see her get hurt again. He is the perfect boyfriend. He is not the perfect Charles. Do you really need me to elaborate more? Here's why our beloved Caleb Rivers can't be Big A.

Let's not just start pointing at random people and calling them, "Charles," OK? That's how witch hunts get started, and that's the last thing the Liars — and Rosewood — need. Just because Caleb is a little bit un-Caleb right now, it does not mean he kidnapped the Liars, including his love Hanna, and held them hostage for three weeks. Simmer down, everyone.

This is the biggest point against the "Caleb could be Charles" argument. Remember that time he was actually written out of PLL? It happened. It was a dark time in our lives (and I guess Hanna's life too). Considering that the writers have been planning Charles' story for three seasons now, there's no way Caleb could be Charles, since he was physically gone from the action for a while, and had Ravenswood not been cancelled, still could have been for the #SummerofAnswers. Plus, it's not like A slowed down while Caleb was gone.

Going overboard to watch out for Hanna is not the same thing as stalking and harassing her like Charles. Also, if Hanna is really committing to this whole "space" thing, can we form an orderly line to claim Caleb as our own for a while? I'm willing to share.

He Loves Hanna SO MUCH

Caleb is a great guy. He's the best guy on the show, if I'm being honest. He cares so much about Hanna (and everyone else) that he's only looking out for her wellbeing. He just wants to make sure that she's safe, even if that means becoming a helicopter-boyfriend for a few episodes. Some fans may think that putting a tracker in Hanna's car was proof that Caleb is Charles and getting ready for his next attack, but the most likely explanation is that he's just so worried about her, he wants to make sure she never goes AWOL again.

Think about what Hanna has been through these past few months. Now think about the other end of it, Mrs. Marin and Caleb. We know that Hanna's mom was so worried that it made her physically sick and landed her in the hospital. Caleb, on the other hand, has developed a heightened sense of danger. They're all dealing with the aftermath of the Dollhouse differently. It affected Hanna, and it affected Caleb too. That doesn't mean he's Charles.

In conclusion: NO CALEB IS NOT CHARLES. HALEB FOREVER. For even more Haleb feels and Charles theories, check out Bustle's Pretty Little Liars podcast below.

More like this
Every Horror Movie Reference In The 'PLL: Original Sin' Premiere
By Alyssa Lapid
The 'PLL: Original Sin' Creators Say A’s Identity Will Be “Very Clear” By The Season Finale
By Alyssa Lapid
Molly-Mae Hague Has Secured Herself A Pretty Little Fortune
By El Hunt
Megan Thee Stallion Actually Auditioned To Be This 'P-Valley' Main Character
By Radhika Menon
Get Even More From Bustle — Sign Up For The Newsletter