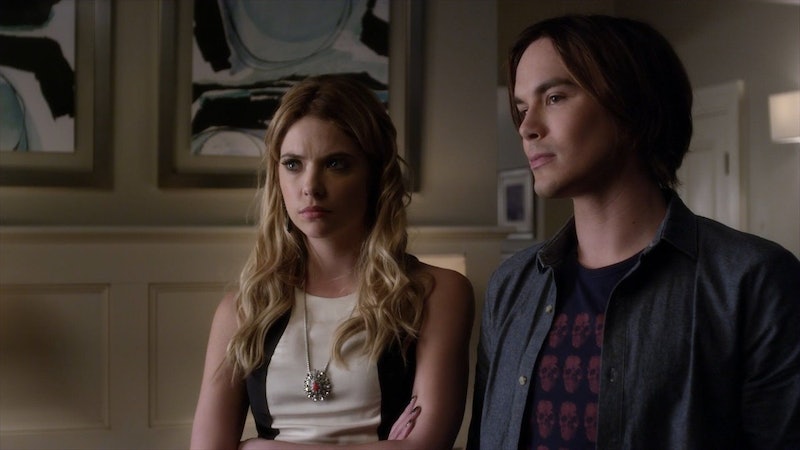 Over the course of the past five-plus seasons, Pretty Little Liars' Hanna and Caleb have quickly established themselves as the OTP to end all OTPs (seriously, Ezria 'shippers to the left). Their combined attractiveness quotient is off-the-charts, and their solid relationship built on mutual respect and genuine affection is nothing short of TV gold. But could they be headed towards the rocks? Could Hanna and Caleb break up in Season 6? Sadly, signs point to yes.

The summary for this Tuesday's "Don't Look Now" rather ominously states, "Caleb’s protective nature starts to pinch Hanna," and executive producer Oliver Goldstick said pretty much the same thing in a recent interview with Entertainment Tonight. When discussing Hanna he said, "Because of her trauma, she might not be able to appreciate how great Caleb is right away in [season] six." That's certainly fair, considering Hanna is still trying to heal after the sick and alienating torture she and the other Liars had to endure for over three weeks in the dollhouse. After all, Charles' methodical form of torture sought to isolate all participants from their closest friends — so it only makes sense that the group would experience some pretty serious aftershocks with their respective significant others.

Besides, if we're going by PLL's history of tumultuous romantic relationships, Hanna and Caleb are about due for some turbulence. It's been smooth sailing since their Ravenswood -induced breakup back in Season 4, ever since they dealt with their alcohol abuse in the early days of Season 5 and moved on to become a strong, loving couple.

When you've got a good thing going on a show like Pretty Little Liars, chances are, there's trouble ahead. We all know our favorite guilty pleasure is a veritable roller coaster of human emotion, and really, can you imagine a worse, more stomach-sinking drop than a Haleb breakup?

Breakup or no, I'm holding out hope that whatever trouble comes Hanna and Caleb's way burns out quickly, and that Goldstick's bad Haleb news is more of the temporary variety. After all, later in the same interview, he was quick to point out, "I think that these two have something that is pretty damn special...I think he's always been there to support her with every decision she makes, and I think he remains the perfect boyfriend in so many ways." (You can say that again, Mr. Executive Producer.)

So, even if our favorite PLL couple is headed for breakup (which, please! No!), there's definite hope for reconciliation. After all, I'm still thinking that there could be weight to the whole pregnancy-teasing that's been going on for a couple of months. Sure, nothing's been substantiated yet, but Tyler Blackburn did hint at a pregnancy scare for Season 5 in a game of Two Truths and a Lie, which never came to be, and Ashley Benson did post those faux-baby bump Instagrams. The evidence is stacking up, people.

No matter what trouble they face over the next few weeks, I have faith that Hanna and Caleb will find their way back to each other, and will never stop dreaming of a post-time jump Haleb wedding. For more on Hanna and Caleb, check out Bustle's Pretty Little Liars podcast below.