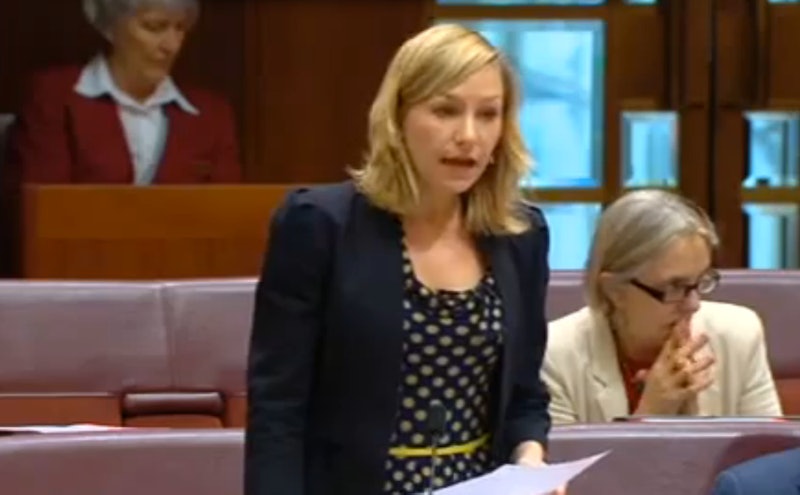 Women in politics have to put up with a lot, as demonstrated by Australian senator Larissa Waters, who was asked if she was married during a recent debate in the Australian Parliament. Because apparently that has something to do with matters of public policy? As Waters puts it rather politely in an essay on the subjects, "I question whether he would have asked the same question of a male Senator."

The remark occurred after Senator Waters asked a question of a representative of the Abbott government whether Prime Minister Abbott would be changing his views on climate change — the impetus for the question being the recent encyclical by Pope Francis regarding the moral need to combat human-caused climate change, combined with the fact that Abbott himself is Catholic. The question was met with outrage by many of Waters' fellow senators, with one calling her a "bloody bigot" before being forced to withdraw the remark. And one senator, Barry O'Sullivan, asked, “You are married, aren’t you?”

Waters responded to him during the session by saying, “No, I’m not and that’s an irrelevant question, my marital status has nothing to do with this chamber.” Afterwards, she also referred to the question as "inappropriate and bizarre," and stated that she believes the senator "needs to explain what on earth he was referring to."

You can watch a video of the full encounter, in which Waters contends with multiple interruptions and lack of attention from fellow senators, below.

Asking a woman about her marital status in a professional context when it isn't directly relevant to the subject under discussion is sexist, and not just because it is, as Waters points out in her account of the session, not a question a male senator would likely be asked to answer. The question carries with it so many implications.

I, of course, cannot say for certain what Senator O'Sullivan's thought process was before asking the question, but I do know that historically, women's marital status has been used as a double edged sword. And we see this all the time with female politicians. When a woman has a family, she's asked how she's going to balance work and family, or has she thought about her husband's and children's well-being before deciding to run. When a woman is single, often it's implied that there must be something wrong with her.

Really, just bringing up a woman's marital status is a way to remind people that the person standing in front of you is a person with ideas and opinions second and a woman first, with all the social other-ing and trivializing that implies. And whether or not Senator O'Sullivan meant it in that context is irrelevant. The remark was disrespectful, irrelevant, and unnecessary.

Of course, here in the U.S. we aren't great about handling women in political office either. Just look at the things Nancy Pelosi, Elizabeth Warren, and Hillary Clinton deal with. And is it any wonder that women in office are subject to sexism from colleagues when so many politicians running for office continue to spout sexist rhetoric?

More like this
Emily Ratajkowski & Pete Davidson's Astrological Compatibility, Revealed
By Nina Kahn
Amanda Gorman Shared A Powerful Message On Meghan Markle’s Penultimate Podcast
By Darshita Goyal
Matt Hancock Broke a Major Rule With I’m A Celeb
By El Hunt
7 Dos & Don'ts To Follow For The December 2022 Full Moon
By Brittany Beringer
Get Even More From Bustle — Sign Up For The Newsletter