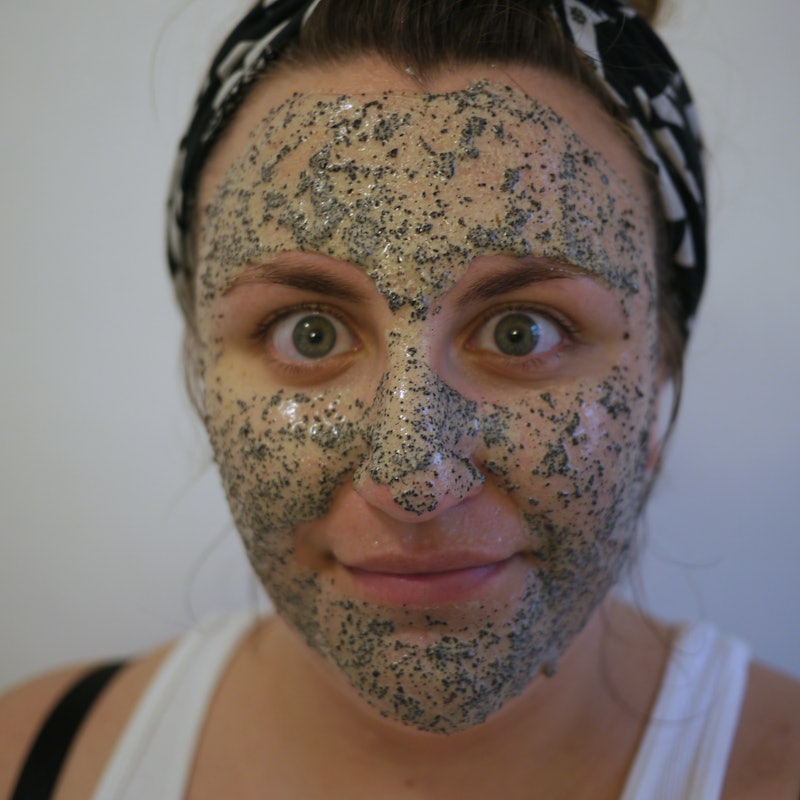 Alright, let's be honest with ourselves: Thanks to the vast, infinite resource of the Internet, there is absolutely no mystery left in DIY beauty experiments. In fact, when you read this, you'll probably sigh exhaustedly at the notion of yet another Internet beauty writer claiming that she has a new, secret recipe for miraculous DIY coffee scrubs. Don't fight your eye rolls: After spending years reading about beauty on the Internet, even I know that this reaction is totally natural.

However, I would urge you to fight your instinct to ignore yet another DIY beauty article and consider the following two things. First of all, many DIY beauty experiments claim to do things that they don't actually do, and you need someone to take the bait and find out what's the truth, and what's a lie. I will proudly serve as your own personal beauty lab rat, and my only interests lie in exposing the truth. Secondly, DIY beauty experiments can be tremendously wasteful and messy, and it's always nice to have someone to shoulder that burden so you don't have to.

Now, let's get down to the nitty-and-literally-gritty truth of it all, because today, I tried out two DIY recipes for coffee ground-based beauty products, and it's time to share the results of these experiments with you.

Before I get into the specifics of how the mask works, I want to take a moment to talk about the ludicrous ingredients lists on most Internet DIY beauty recipes. This particular recipe called for Greek yogurt, lemon juice, and used coffee grounds, but in absolutely HUGE amounts.

Call me crazy, but a LITERAL CUP of Greek yogurt is enough to feed me for two breakfasts, and would only be appropriate for my face if my face was the size of a Mitt Romney meme. You absolutely do no need to adhere to the amounts specified in most blogs, and in fact, I'd recommend you didn't. Here's the quantities I used instead:

I was most sparing with the lemon juice, because I don't think it's a good idea to smother my face in citric acid. For me, the presence of the lemon was all about a pop of freshness in the scent, and 1/4 tsp was totally enough to make it work. Here's what the mask looked like when I mixed it all together.

Now, at this point, it is imperative that I remind you that this is not, in fact, melted cookies and cream ice cream. Sure, as you're mixing it together, you might start to convince yourself that it is the melted ice cream you know and love, and you might even be tempted to see if it tastes a little bit like it. Giving in to that temptation will only lead to disappointment. Don't ask me how I know that, because I just do, OK?

The yogurt contains lactose enzymes, which are said to dissolve dirt and moisturize. The star of the show — coffee grounds — contains loads of antioxidants and is also the right texture to work as a natural exfoliant. As I mentioned before, I just used the lemon for a little zest, but many people believe that the citric acid ultimately brightens your skin.

Here's my face before the mask, during use, and afterwards.

First, I massaged the mask onto my face, which I did with a very, very light hand. Coffee grounds are tough and these particular ones were large, and you do not need to go bananas here — be kind to your dermis, and don't try to get down to the bottom layers of it.

I left it on for about 15 minutes, and during that time, my face felt so, so good. The mask was cooling and felt truly spa-like, and when I rinsed, I noticed that my face was incredibly soft and also slightly more even toned. The recipe claimed to brighten skin and improve texture, so I suppose that it did it's job — just don't go into it expecting miraculous results.

Let's just get one thing out of the way: No amount of buffing, moisturizing, or coffee-and-oil scrubbing is going to get rid of your cellulite. The claims I saw about this mask said something about the caffeic acid in coffee being a "cellulite-stopper," but just know that claim is what experts call a "steaming pile of horse poo." From what I've read, if you douse your skin in tons of retinol over the course of six months or more, you might see a subtle difference. Maybe. Otherwise, learn to love your cellulite and move on with your life. After all, it's literally just a bunch of lumpy fat and there are so many more interesting things about you that humans would like to hear about, like the time you tried to eat your own coffee and yogurt mask.

I wanted to make the scrub anyways, because I love body scrubs and also, because I thought it would be particularly moisturizing. I get terrible dry skin on my buns and the backs of my legs, and so that's what I focused on when I used this. The recipe for this is as follows: 1/2 TBSP olive oil, and 1/2 cup of coffee. It's that simple. Here's what it looks like all mixed up.

It's a gloriously oily, gritty tar-like substance, and frankly, I couldn't wait to rub it all over my butt. Here's how it looks in action:

The oil makes the coffee grounds cohesive enough to actually stick to your body, and the size of the grind is rough enough to tackle the roughest, most under-exfoliated parts of your body. I'll spare you the photographs of me rubbing coffee grounds all over my rump, but rest assured that it probably looked something like this:

When I was finished, I was floored by how soft and smooth my skin was. The only thing I'd do different next time is use even less olive oil: Coffee grounds have oil in them as well, and it was difficult to rinse the overall oily film from my body. However, this is a DIY beauty recipe that I will definitely be doing again, and you should try it, too. Just remember: Your cellulite will not be going anywhere.

Overall, these two coffee-based recipes were pretty successful, provided that you expect reasonable results and don't break the bank on Greek yogurt. If you wanted to try these two things at home, I'd keep these other three things in mind.

Now brew yourself a nice, strong cup of joe and start experimenting.