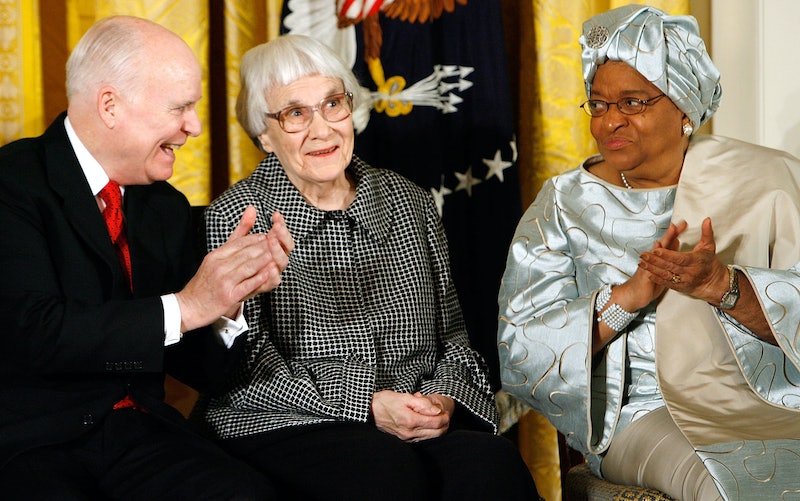 Sure, Fifty Shades fans ran out and bought E.L. James’ surprise novel Grey in June (a book that’s told from Christian’s point of view, since men’s voices are so marginalized in our society), but the hottest book of the summer will no doubt be Harper Lee’s much anticipated To Kill a Mockingbird followup, Go Set a Watchman . There’s probably no bondage or flogging or lusty helicopter rides in Lee’s novel — and that’s not necessarily a bad thing.

There’s been much controversy surrounding the release of Go Set a Watchman, Lee’s first book since her Pulitzer-winning masterpiece came out in 1960. Go Set a Watchman catches up with Atticus and Scout Finch two decades after the events of To Kill a Mockingbird. Lee actually wrote the book in the mid-1950s, before Mockingbird. When the manuscript was discovered and news broke that Lee’s publisher would be releasing the book this year, excitement quickly gave way to skepticism and fear. Some worried that the octogenarian Lee had been taken advantage of. After an investigation, a court ruled that Lee was of sound mind and wanted her long-awaited novel to be published. Go Set a Watchman is now the most preordered book in HarperCollins’ history. Let’s hope and pray it lives up to the hype.

There’s obviously a lot to be learned from Lee’s characters — empathy, kindness, the ability to speak out against cruelty. We read and studied and debated To Kill a Mockingbird in school. We reread it in our early 20s, with no teacher there to guide our way, and fell in love with her prose all over again. Atticus and Scout are a permanent part of our collective consciousness, and celebs have even named their kids after them! In short, Lee’s first novel was a rare, true work of genius, which accounts for all those Go Set a Watchman preorders.

In celebration of the book's release, here are five important life lessons learned from Harper Lee.

To Kill A Mockingbird by Harper Lee, $9, Amazon

Atticus Finch is the epitome of patience. “Simply because we were licked a hundred years before we started is no reason for us not to try to win” is one of his oft quoted philosophies. Lee is pretty patient herself — how many celebrated, world-renowned writers wait almost half a century to publish their second novels? I’ll tell you — none. Except Harper Lee. And now look at the hoopla surround its release.

Did Harper Lee spend the last 50 years worrying that she was missing the Met Gala or stressing that she wasn’t getting enough ink in the New Yorker? Nope. She was living a small-town life in Alabama for the most part (unless she was sneaking off incognito to San Tropez). She hasn’t spent her life chasing the spotlight or worrying about missing out on awards or fancy distinctions. Probably because she didn’t have to.

You Shouldn't Care What the Neighbors Say

So much of To Kill a Mockingbird is about staying true to yourself and standing up for what’s right, regardless of what the crowd thinks. Lee also no doubt faced pressure over the years to put out more work and give up her privacy for fame and fortune. She probably didn’t much care whether or not people were calling her washed up or reclusive. She just did her thing.

“You never really understand a person until you consider things from his point of view … until you climb into his skin and walk around in it.” Leave it to Atticus to school his kids (and us) about compassion. Just look at Boo Radley — all the guy needed was a little compassion!

It’s Always Better in the Morning

It’s a simple thought, expressed in To Kill a Mockingbird, and it’s also comforting and true. Things are always better in the morning, unless you wake up with pinkeye or something. Generally, things do have a way of working out. Sometimes you just have to sleep on it.

And so, here’s hoping (praying? beseeching the gods?) that Go Set a Watchman is as revelatory, beautifully written, and inspiring as To Kill a Mockingbird. Here’s hoping Harper Lee made us wait all these years for a reason. Here’s hoping we learn something new from her words.

More like this
‘The Mosquito Coast’ Book Ending Includes A Major Character’s Death
By Brad Witter
The 'Firefly Lane' Book Ending Teases Way More Tears To Come In 2023
By K.W. Colyard
'Shadow And Bone' Season 2 Pics Show Mal & Alina Starting A New Journey
By Bustle and Bustle UK
The 'Lady Chatterley's Lover' Book Leaves Us With A Troubling Question
By Catharina Cheung
Get Even More From Bustle — Sign Up For The Newsletter