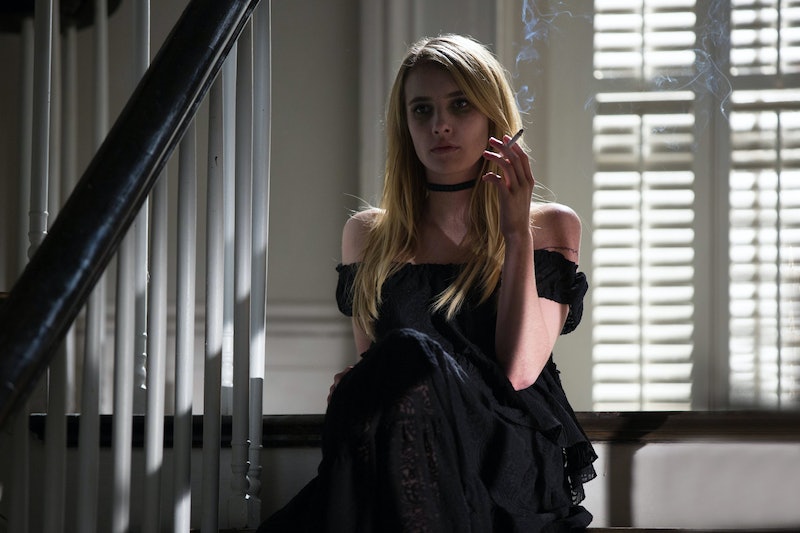 Wednesday night's American Horror Story: Coven delivered an interesting theory on youth culture: Millennials are actually dead inside. It's an assessment that takes the Time Magazine article that called Millennials the "Me Me Me Generation" and claimed they're all "lazy, entitled narcissists who live with their parents." To be fair, Joel Stein did have research claiming narcissism was at all-time high among 20-somethings. Murphy's assessment is just cruel.

We hear his diatribe in the form of Madison Montgomery's (Emma Roberts) inner monologue after she's brought back to life. Stalking around the house like a half-zombie, the gash in her neck still gaping from where Fiona sliced it, Madison laments that she no longer feels anything. She burns her hand to a crisp and doesn't flinch. She fills her body with an entire Thanksgiving dinner and it doesn't register. This lack of feeling, she decides, is akin to what it feels like to be a millennial.

I am a millennial. Generation Y, born between the birth of aids and 9/11 give or take. They call us the Global Generation. We are known for our entitlement and narcissism. Some say it's because we're the first generation where every kid gets a trophy just for showing up. Others think it's because social media allows us to post whenever we fart or have a sandwich for all the world to see. But it seems that our one defining trait is a numbness to the world, an indifference to suffering. I know that I did anything I could to not feel — sex, drugs, booze. Just take away the pain. Take away my mother and my asshole father and the press. Take away the boys I loved who wouldn't love me back. Hell, I was gang-raped, two days later I was back in class like nothing happened. I mean that must have hurt like hell, right? Most people never get over stuff like that, and I was like, 'Let's go for Jamba Juice.' I would give everything I have or have ever had just to feel pain again. To feel hurt.

In one meaty paragraph, we're treated to a sweeping generalization: millennials are like undead corpses roaming the Earth and taking selfies, and we'd best not waste the ability to feel everything while we still have it. Just look at Madison; now she's stuck taking every pill she can find and having sex with Zoe's Franken-boy toy, who's capable of little more than thrusting and grunting, just on the hope that she might feel something. We shouldn't take our humanity for granted. By episode's end, even cool cucumber Zoe has given into carnal delights as she agrees to engage in a ménage à trois with her two undead compadres. They've learned what it's like to feel again, shouldn't you do the same, young viewers glued to Twitter while this episode is playing in front of your faces?

It seems a bit odd that American Horror Story would rally so harshly against a great segment of its audience — and the section that makes it such a staple on social media. Sure, there are some millennial fans who seem to be heartless (more than we'd like to think are out there, as a matter of fact), but this sweeping generalization of millennials as unfeeling zombies is not only harsh, it's as cold as Madison's dead hands.

At the basest point, it would actually seem that we all feel too much, as a generation. This meal is on Instagram because at this in moment in time, it feels life-changing. I'm posting this tweet about how awful my day is because it seems that nothing could ever be worse than having someone spill a latte on your new pants. This bowl of pasta I cooked is a lifetime achievement worth sharing with the world, okay? As it stands, the narcissism claim might not be so far off.

But the problem with Murphy's approach is that is does what every other criticism of Gen Y has done for the past few years: reduce us to a field of drones who grunt "selfie" and "Twitter" in unison. Sure, as people growing up with tools practically created to stroke our egos, it's hard to maintain a sense of understanding outside of ourselves. And sure, we're exposed to so much via the plethora of information mediums at our fingertips that we can sometimes appear to be unmoved. Some of us let these technological gifts wash over us and make us numb, but I'd beg to differ that there are many of us who take these endowments as methods by which to increase our knowledge and emotional aptitude.

It's services like Twitter and Facebook that spread information so quickly that within minutes, the entire nation can be brought to a pause to support and honor victims of terrible tragedy, to celebrate those who achieve great success, and (when that's not an option) to worship Beyonce. It's these systems that have allowed us to feel connected to people we may have lost to distance, and even those who we might never have known at all.

Sure, there are many members of the millennial generation who want a gold star for writing their names down correctly and who'd rather read a list of the Top 23 Pictures of Terrible Things Happening to Unfortunate People than something that might actually make them think or feel. But they do not get to represent all of us — your research and charts be damned.

So mock us all you want, Mr. Murphy. But just know, these narcissists are prone to air their grievances all over the Internet and while AHS is a fictionalized twist on history, we (and our non-absent feelings) are very, very real.

More like this
Kourtney Kardashian & Travis Barker Are Married – Officially
By Sophie McEvoy
Simply Sayo Doesn’t Consider Kpoetry Hard Work
By Jessica Morgan
Sam Ryder Is Ignoring The Eurovision Hype, Too
By El Hunt
Sandra Bullock, Girlboss Extraordinaire
By Matt Harkins & Viviana Olen
Get Even More From Bustle — Sign Up For The Newsletter