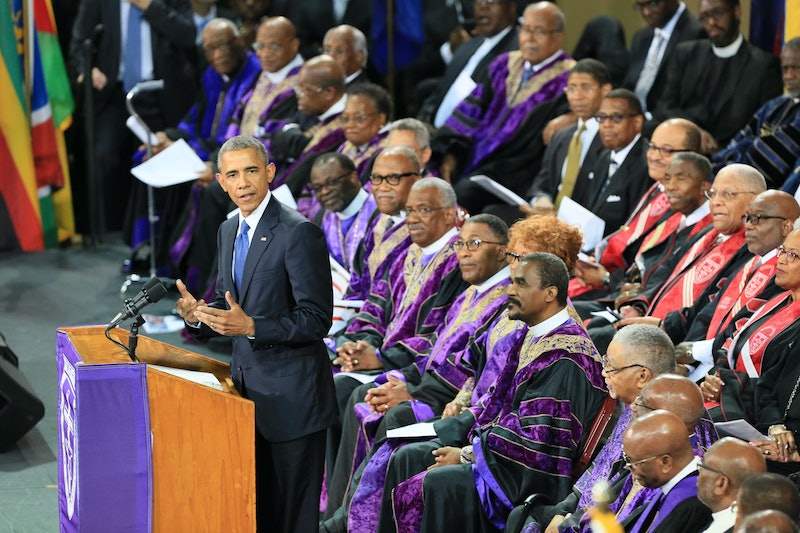 President Obama always knows exactly what to say — or sing — in the right moment. During his eulogy for Rev. Clementa Pinckney, who was one of nine people slain last week in a racial attack on Emanuel AME Church in Charleston, South Carolina, Obama finished off by singing "Amazing Grace" and led the church in unison in song, a poignant moment caught on video that really testifies to how the country can beautifully come together and rise above tried times.

In his eulogy, Obama, who personally knew Pinckney, remembered the pastor as a "man of God who lived by faith" and who knew that there were better times in the future. The president also touched on gun control reform as one possible solution to minimize violence, including racial attacks, in the country. Since the Charleston shooting, Obama has advocated for stricter gun legislation in a number of statements and interviews, including one particularly candid talk with podcast host Marc Maron.

But Obama ended on an uplifting note — literally as he topped his eulogy with the classic hymn that has come to transcend any specific religion or denomination. The moment he uttered that first "Ah," people whooped and cheered, and the rest of the church quickly joined his deep voice. "Amazing Grace" is a song of hope, one that teaches us that no matter what trials or tribulations you face, there will be a shining light at the end of your journey and you will come out on top. And given how Friday also saw the Supreme Court legalize gay marriage throughout the country, it really was the perfect way to end this week.