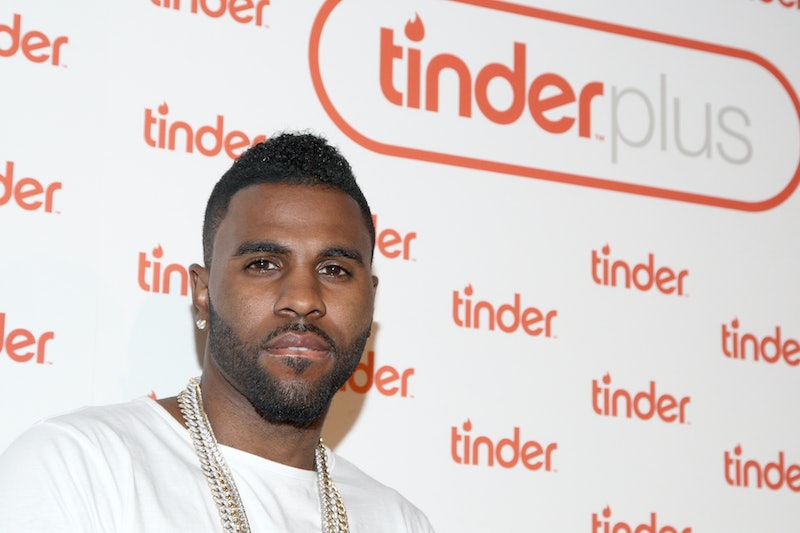 If I was ever granted three wishes by a genie, I honestly think that one of them would be that every time I was about to enter a room, Jason Derulo would proceed me and sing my name, the way he sings "Jay-SON DerUuuUulo." That's when I'll know I've made it. While for me that's just a pipe-dream, the real life Jason Derulo is definitely having a Moment right now. His most recent single, "Want To Want Me," is super popular right now. And on top of that, he's been added to a list of stars who will be honoring Janet Jackson this Sunday at the 15th annual BET Awards, paying tribute to the legend and icon for her revolutionary work in the world of hip-hop and R&B. So is Jason Derulo dating anyone, or will he be strutting down the red carpet solo?

As far as I know — for now — Derulo is single, but he's ready to mingle. The 25-year-old singer had a pretty shocking and dramatic breakup with his longtime partner Jordin Sparks in September 2014. And that's putting it kindly. It was truly a breakup that nobody saw coming, after Derulo and Sparks had been dating for nearly three years. The breakup was mutual, as both the singers attest to, but in an interview in December it definitely became clear that Sparks came out the better of the two — Derulo gifted her a BMW, which she promptly just dropped off at the BMW dealership because she didn't want to deal with it. Boss.

Since then, it seems like Derulo is just dating around, although there is a more salacious rumor in the air: that the reason for his breakup with Sparks was because he cheated on her with model Carmen Ortega. But when she appeared on The Wendy Williams Show back in October right after the pair had split, Sparks said she didn't want to comment on the cheating rumors whatsoever.

But Derulo, whther he's with or ever has been with Ortega or not, isn't spilling any beans. He said in an interview with E! News back in March before his new single debuted on Tinder (that's right, Tinder):

I am dating. I want somebody that I can talk to and is kind like me and likes to have fun and try new things... I really don't have a type. I think when someone is beautiful, it comes in all shapes and sizes so in terms of looks, I don't have a specific type.

That's open-minded of him, I gotta say. Derulo, though, said that he won't actually use Tinder because he's afraid of getting stalked by fans, which I guess isn't an unreasonable fear. But as of now, it looks like he's just dating around, even if he's not swiping one way or the other. We'll have to wait and see who he brings along to the BET Awards on Sunday night, if anyone.