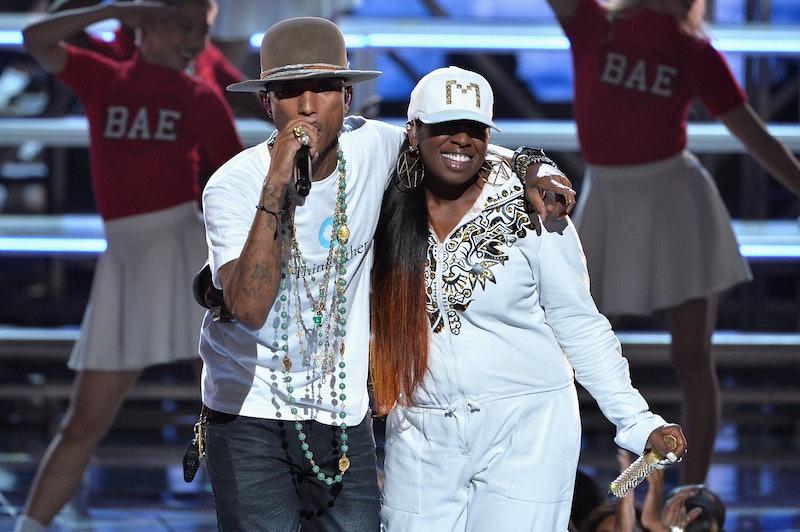 Up until recently, I honestly believed I had a lot in common with Missy Elliott. We both can't stand the rain, and we share similar musical tastes — there are lots of similarities. But, the fact that Missy Elliott hasn't said much about her new songs or album directly contradicts my tendency to over share, which is why I'm beginning to think we're not exactly twin souls. Luckily, she has an unofficial spokesperson in her production partner Timbaland, and he's sharing some news when it comes to her new album — at least, a little bit. During an appearance at the ASCAP Rhythm and Soul Music Awards, Timbaland confirmed that Pharrell produced Missy Elliott’s new single.

While this is great news, it's not without its downfalls: There's still no title (that fans know of) or tentative release date (the latter of which I know because the only thing Missy has tweeted about her new song is, "Sorry no dates on a new single from me but I'll keep yall posted if I do,"). SIGH. Sorry guys, but her keeping this tight-lipped leaves me no choice but to only assume exactly how this new Pharrell and Missy Elliott song will sound.

Since I don’t have a crystal ball to predict the future or someone to spy on Missy and Pharrell in the studio together, I’ve pulled from their past collaborations to surmise precisely what fans should expect from this single (aside from the obvious fact that it will undeniably hot). What’s surprising is that the two haven’t really worked together very much, except for a performance at the 2014 BET Awards, a couple of songs, and a handful of remixes produced by the Neptunes.

So, based off a few of those songs, here’s what I foresee in Missy and Pharrell’s collaborative future:

"On & On" Featuring Pharrell

The first thing I thought when listening to this song from Missy's 2005 album The Cookbook was that it sounds like a video game, and there's a good reason for that — it's featured on the Pharrell-produced NBA2K15 video game soundtrack. I fully expect her new single to feature the same spaced-out sound, only a little less cartoonish.

"Put It On You" Featuring Pharrell And Teyana Taylor

This unreleased promotional track is kind of all over the place, but it features Missy rapping (in Pig Latin!) over a fast beat. It reminds me of "Lose Control" featuring Ciara and Fatman Scoop, and I definitely predict Missy and Pharrell's single will sound similar.

Ridiculously long song title aside, this 2001 track was heavy on the sass, the sexy (duh, Janet Jackson) and the bass, but when Missy's harmonies come in at 1:52, I nearly lost control. As usual, she delivered total hotness on the rap front, but I will be sorely disappointed if she doesn't sing at least one verse on her new track.

C'mon, Missy — give us at least one hint about when we can expect this new track?!

More like this
Taylor Swift, Kerry Washington & More Speak Out On Uvalde Mass Shooting
By Jake Viswanath
Stormi Just Walked A Red Carpet With Mommy Kylie Jenner & Daddy Travis Scott
By Hugh McIntyre
Is Megan Fox Pregnant? MGK Gave A Shout-Out To Their “Unborn Child” Onstage
By Hugh McIntyre
Twitter Has Very Mixed Feelings About The New 'American Idol' Winner
By Jake Viswanath
Get Even More From Bustle — Sign Up For The Newsletter