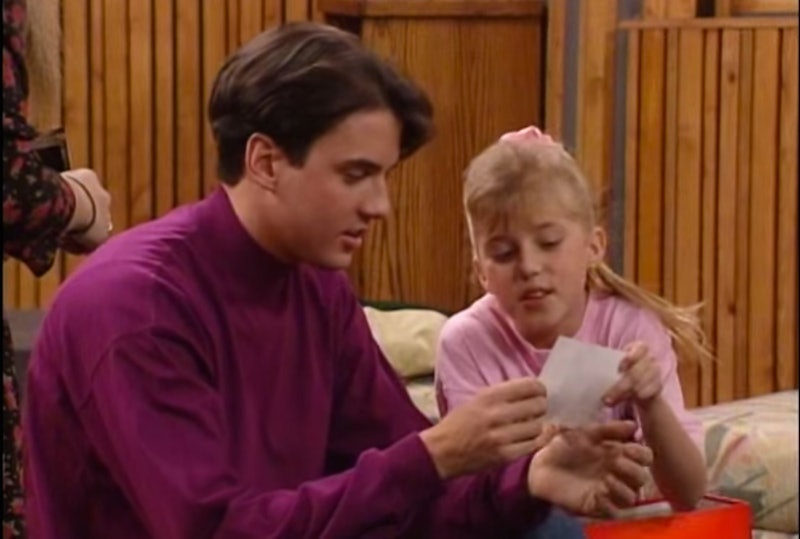 The memories of the Tanner children from Full House sometimes feel like my very own and one episode in particular has always stuck with me. In Season 5, Stephanie and I were both "crushed" when Tommy Page was on Full House and serenaded her with a personalized song for her tenth birthday. This Stephanie and DJ-centric episode, which featured Page at his dreamiest and aired in 1992, was a pretty huge milestone in my life.

The general plot was that Stephanie's favorite singer Tommy Page was on Wake Up, San Francisco, so Danny arranged for him to come sing to her at her birthday party. Stephanie fell for him — and then DJ fell for him — leading to some serious sisterly rivalry. Even though I was younger than Stephanie when the episode aired, I remember wanting Tommy Page to come to my birthday party and, well, I also remember singing the "Stephanie" song at school. It wasn't until recently that I found out Tommy Page is an actual musical artist! With a real website and verified Twitter account and everything!

Tommy may have fictionally broken both DJ and Stephanie's hearts, but I went on the emotional roller coaster and was "crushed" with the Tanner girls. Here are the 19 best things that happened in this classic Full House episode.

1. Nicky & Alex Were The Tiniest

Good thing they were so adorably small since they joined the already Full House.

Michelle wanted to learn how to be funny from Joey to make Alex and Nicky laugh. Besides mastering a power laugh, Joey claimed, "You'll have those babies laughing so hard, there won't be a dry diaper in the house."

When Stephanie proclaimed her love for Tommy, DJ said she had a similar childhood crush on George Michael... Until his earrings got bigger than her's — burn.

Even though Danny secretly got Tommy to agree to stop by Stephanie's birthday party, this might just be one of his cheesiest lines ever — which is really saying something.

5. All The 10-Year-Old Girls Chose Uncle Jesse As Their Dance Partner

Stephanie's birthday party sent all the girls into a frenzy over Jesse, which I'm sure many viewers at home could relate to.

A dance break to "Good Vibrations" was essential for all 10-year-old birthday parties in the early '90s.

7. Tommy Page Gave Soulful Glances While Singing To A 10-Year-Old

Well, Stephanie was what dreams were made of.

Of course, the Tanners' neighbor wanted him to autograph her notoriously stinky shoe.

Tommy showed Uncle Jesse who the real pop star was, but that's OK, since Jesse and the Rippers prefer to perform intimate live shows where they can split a pizza with the audience.

10. Stephanie Said, "I Just Put On One Little Dab...On Every Inch Of My Body"

Apparently Steph thought bathing in perfume was the best way to woo a celebrity.

Not only did he sign her CD with "Love, Tommy" he also kissed her on the lips...the lips!

12. Stephanie Prepared Her Wedding Invitations For Her Marriage To Tommy

DJ showed Tommy the sites of San Francisco and then he showed her his famous lips. Unfortunately, Stephanie saw the two-timing Tommy kiss her older sister and was really upset about it.

Leading Aunt Becky to give Stephanie some reasonable womanly advice about situations like this.

Kimmy was very impressed with DJ kissing Tommy (according to DJ, they were starting a serious relationship). With lines like these, I'm starting to think that Andrea Barber was the unsung hero of Full House.

Tommy didn't write the song "Stephanie" for Stephanie! He told Uncle Jesse that he wrote it for his girlfriend Melanie and changed all the Melanies to Stephanies in the song. What a scuzz king!

It's a low blow — even for you, Stephanie — to show the photo of DJ's first bath to win back Tommy's attention. The photo sharing led to DJ and Stephanie running around the house fighting over Tommy, since DJ also became delusional after Tommy kissed her.

Nothing says "Intercepting your two 'nieces' from acting like love-crazed goons" like a sweater inspired by a Heinz bottle of ketchup.

19. And Then Tommy Took No Responsibility For Kissing All Of The Tanner Children

With a quick farewell and a lame apology to DJ and Stephanie where he said he just wanted to be friends with both of them, Tommy left the Tanner household — but not before giving Michelle a kiss too. As Uncle Jesse said to Danny, "Next time you bring a star home, try Angela Lansbury."

Luckily, once Tommy left, DJ and Stephanie were able to reconcile over their broken hearts and the sweet sound of Tommy singing "Stephanie" (because he had recorded it in Jesse's basement studio) ended the episode. Oh, to have been Stephanie in that moment.