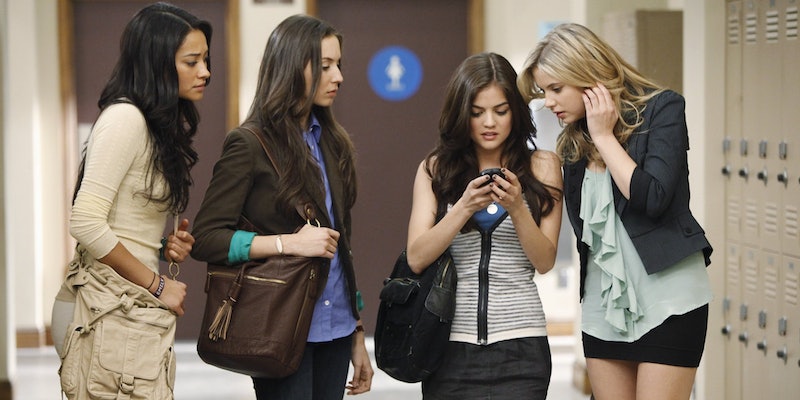 Teen shows often have a reputation for being nothing more than a mindless guilty pleasure we indulge in after a rough day or week. The stereotype is that they're generally shallow and something we can have on in the background while we get other things done — after all, the plots are uncomplicated and predictable, so the episodes don't require our undivided attention. However, none of these unfortunate stereotypes are true of ABC Family's Pretty Little Liars and, although it is preceded by plenty of great teen dramas, it is also a game-changer in the genre.

The series' central mystery is so complex and multi-layered that it's often impossible to keep everything straight, but the clues don't lie only in the characters' behavior and words. The show also uses literary and film references as clues, which is a clever tactic that I don'y recall seeing on many adult mystery shows. It also handles social issues, such as sexuality and mental illness, with sensitivity and aplomb. What's equally interesting is how the show's creators have used social media to engage viewers and to even influence their own writing.

Pretty Little Liars has changed the teen drama game and set the bar high for any shows that aim to follow suit. Here are five ways the show has redefined teen drama, both in the world of Rosewood and in real life.

Teen shows are often focused on modern trends and any pop culture references are of the moment. On Pretty Little Liars, the opposite is true. Allusions to literary and film classics abound. Several in particular hold symbolism (and clues) and are referenced multiple times throughout the series.

Literary: To Kill a Mockingbird references date back to the second episode of Season 1, when the Liars are reading the book in Ezra's class. And who could forget that all roads lead back to Radley? The Great Gatsby is also alluded to multiple times, the creepiest of which shows a Gatsby-esque billboard staring at the Liars as they receive a text from A. It's a less-than-friendly reminder that they are always being watched. Lolita is mentioned multiple times as Ali's favorite book — her alias Vivian Darkbloom is an anagram of Vladimir Nabokov. She's not much of a bookworm, so her love for this particular classic remains one of the show's unsolved mysteries. And while we're at it, we're still waiting on an answer regarding Varjak's true identity!

Film: The show is heavily influenced by Hitchcock. The bell tower scene in the Season 1 finale (in which Ian tries to push Spencer to her death before A kills him) echoes Vertigo. Rear Window is referenced when Hanna sits in her wheelchair looking out the window after being running over by A (Toby is shown in a similar position later in the series). The Lost Woods Resort is inspired by the Bates Motel of Psycho, complete with a scene of Hanna in the shower — although she leaves the motel in one piece, unlike poor Marion Crane. In Ravenswood, Spencer and Toby watch a flock of birds fly off a telephone wire which clearly mimics an eerie scene in The Birds — and let's not forget the parrot named "Tippi" after the film's star, Tippi Hedren. When Ali is attacked in Season 5, the incident mimics Dial M for Murder — check out this gifset from Tumblr acquiescently that shows the scenes side by side.

2. It Handles Female Sexuality In A Realistic Way

Emily Fields is one of TV's most inspiring LGBT characters and the show has handled her sexuality in a way that is both realistic and empowering. In fact, Pretty Little Liars' depiction of all four girls' sexuality is more progressive and realistic than many teen shows. Instead of the overplayed stereotypes of the virginal friend versus the sexually active friend, all four Liars are depicted with realistic sexual agency. None of them takes the decision to lose her virginity lightly, however they're not ashamed of their sexuality either. This is something we need to see more often — both on our TV screens and, more importantly, in real life — because it's all too common for girls, especially teens, to be stereotyped or mocked for their sexual decisions, whether they choose to become active or not.

3. The Depiction Of Mental Illness Is Compelling

Mona is an extreme example, but hear me out! Spencer's struggles with addiction and accompanying anxiety are both compelling and realistic. Sure, addiction has been covered by teen dramas before, but it's usually a story arc that's resolved within a couple of episodes. Spencer's addiction doesn't dominate every episode, but it's a problem she grapples with over the course of years. When she hits rock bottom and would prefer to be at Radley than back home in Rosewood, it's believable after all she has been through.

Now that the Liars have returned home from the dollhouse, they all seem to be dealing with varying levels of PTSD. The triggers and flashbacks they experience depict what it's like to re-live your worst nightmare over and over again. Seeing Spencer dig through Aria's trash cans wasn't a pretty sight, but it showed just how far she was willing to go in order to get a decent night's sleep after a month of psychological torture.

4. Its Use Of Social Media Has Been Savvy And Effective

According to Ad Week, the show has gotten over 100 million tweets since its 2010 debut and it has the most-tweeted about telecast ever (with the Season 4 summer finale, "Now You See Me, Now You Don't"). The show's stars are all active on social media, especially Instagram and Twitter, where they engage with their fans. Everyone from celebrities to super-fans to major magazines live-tweeted the recent Season 6 premiere — and let me tell you, as a west coaster I've learned to just stay off social media altogether on Tuesday nights otherwise it's basically a guarantee that I'll see multiple spoilers.

As all dedicated fans know, the Internet abounds with theories about pretty much every aspect of the show. If you start digging on Tumblr, you'll soon find that four hours have gone by and your head is spinning because you've just read so many brilliant, plausible possibilities. In an interview with Bustle earlier this year, Shay Mitchell confirmed that the series' writers read social media feedback and fan theories do affect the show. Although the online fandom for Pretty Little Liars is unprecedented, it will be interesting to see how future teen shows use social media — both to promote the show's popularity and to influence the plotlines. For more on the series' excellent contributions to TV, story arcs, theories, and more, check out Bustle's Pretty Little Liars podcast below.

More like this
Michael & Kathleen Peterson’s House From ‘The Staircase’ Has New Owners
By Kadin Burnett and Kayla Blanton
Everything To Know About A Million Little Things' Reported Final Season
By Brad Witter
'Who Killed Sara?' Won’t Return For Season 4
By Brad Witter
'This Is Us' Just Gave New Meaning To Jack's Death & His Love Story With Rebecca
By Grace Wehniainen
Get Even More From Bustle — Sign Up For The Newsletter