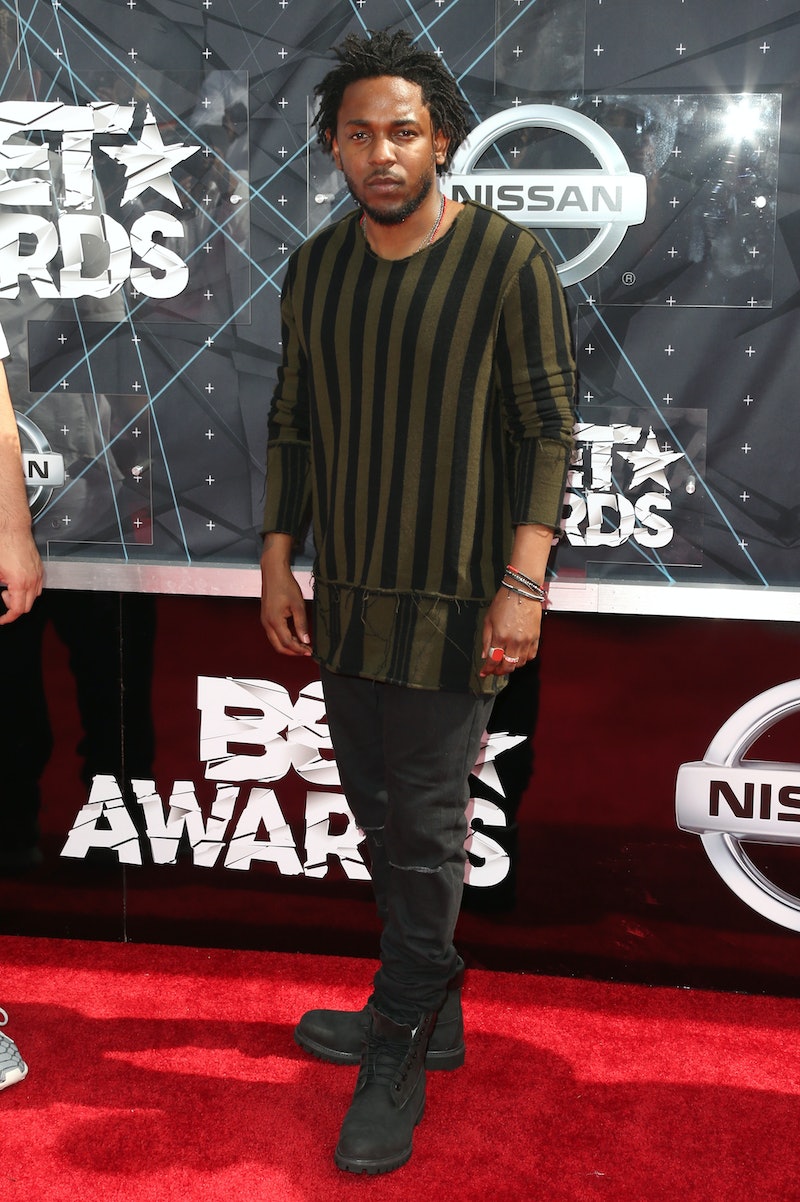 The BET Awards are always a time of great merriment and, by their very nature, diversity. While other award shows might struggle to show a little less uniformity among their nominees and winners, the BET Awards is devoted to celebrating excellence among African-American musicians and actors that might be otherwise overlooked. However, on Sunday night, the awards show wasn't just there to entertain us while recognizing some of our favorite artists for their talents; those same artists used the BET Awards to make political statements, whether verbally or via their performances over the course of the night. From the moment the show began with an epic performance by Kendrick Lamar of his hit song, "Alright," to the last few minutes of the ceremony, the stars were using their fame, influence, and time in the spotlight to comment on important social and political issues facing the country. And it was exactly as amazing as it sounds.

Of course, there's plenty of precedence for such a thing. It seems that, more and more, celebrities are using their influence to do some good in the world, whether it's the 2015 Grammy Awards performance during which Pharell paused for a "Hands Up Don't Shoot" tribute or it's Miley Cyrus bringing a homeless youth as her date to the VMAs to raise awareness, and money, for homeless teens. The BET Awards is just the latest platform to enable those icons who want to lend their voice to a movement to reach as many people as possible with their message, and some of them took advantage of that.

Check out the best political messages of the night below.

During the opening performance of the BET Awards, Lamar set a high bar by performing atop police cars that were covered in graffiti, which, as Bustle's Tiffany Thomas pointed out, was likely an homage to his hometown of Compton, California. As he rapped about how, "we hate Popo, wanna kill us dead in the street for sure, i'm at the preachers door," the lights went out and the stage went dark except for the name of Lamar's album and the American flag. Then, when the lights and music returned with a vengeance, his surrounding dancers were marching in front of a screen of American flags, while carrying American flags themselves. It might have been a grim representation of America, but it was one that, sadly, is the reality for many neighborhoods.

In the middle of a performance of "You're So Beautiful" from the Empire soundtrack, Jussie Smollett stopped the performance in order to drop some serious truth bombs on the audience. "We live in a nation where freedom is what we represent, yet we are still fighting every day for the basic freedoms of all of our people. Let the Supreme Court ruling be proof of how far we have come. Let the deaths of our sisters and brothers be proof of how far we have to go. No one is free until we are all free." He ended the performance with a strong, "Stand for love." You know, as if the rest of that wasn't perfect enough.

There's literally no way to describe Jordan's speech on the Charleston shooting and Black Lives Matter that would even come close to just listening to the speech directly, but, suffice it to say, when Jordan walked out onto the stage to great applause, I don't think any of us were expecting the beautiful speech that followed. "BET is shining a light on you, for taking to the streets, insisting that Black Lives Matter, and being a constant reminder that we are not yet where we intend to be," he said to close the statement. "Black Lives Matter. You matter. We see you, and we applaud your unbreakable, unshakeable strength. Thank you."

When the great Labelle and her backup singers — I mean, K. Michelle and Tamar Braxton — took the stage, good music was a given. You know what else was a given? A short and sweet statement about marriage equality that was the perfect way to tie off the award ceremony. "We celebrate the Supreme Court decision," said Labelle. "That all people can love whoever you want, and you can even get married. Can I get a whoop whoop?"

These were just a few of the stand out moments in which celebrities took a moment out of their time as entertainers to educate, raise awareness, and take a stand on issues that affect all of America. From Black Lives Matter to marriage equality, the BET Awards really did shine a spotlight on these important things, and that is truly commendable.