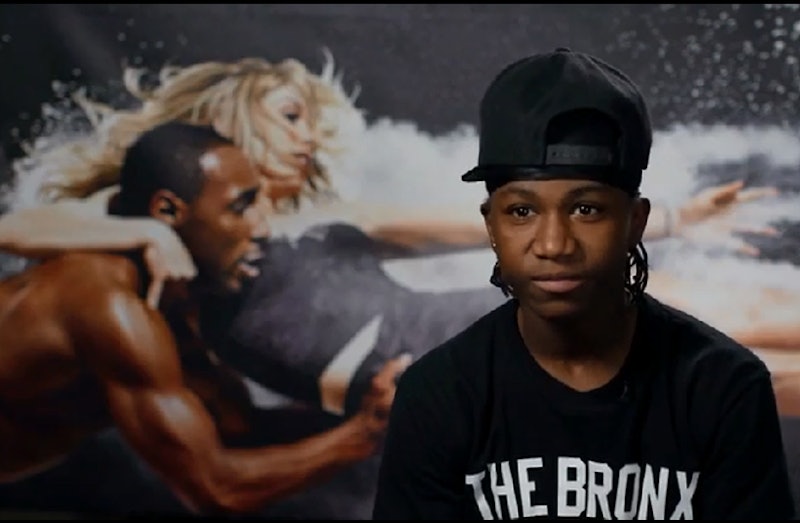 I have to admit that I've spent most of the Season 12 So You Think You Can Dance auditions so far in mourning for the show's old format. I used to look forward to seeing the dancers who annihilated their solo take on new dance styles in Vegas, and then again on the big stage. But it's contestants like Bronx B-Boy Eliazer Chapman who give me some faith in this new SYTYCD structure. Judging from his size and lack of formal training, he may not have been able to shine as a partner in the Stage styles. But he does what he does so incredibly well that all I want to see him do is more of it. And he'd be a huge (figuratively) asset to tWitch's Team Street.

Chapman is younger than a lot of the hip-hop/breaking/animation/b-boy contenders we've seen so far. Compared to Stage dancers who are installed in dance classes almost as soon as they can walk, Street dancers usually discover their art form on their own as teenagers or young adults. Hence, we've got dancers in their late 20s and early 30s who have spent a decade or so honing their craft on streets, at parties, and in battles. Eliazer Chapman came to the show at the tender age of 18, however, and he is already as impressive as his older colleagues.

And, for good reason. Chapman was motivated to succeed because of his tough family situation. At the age of 4, he and his father were forced to move into a homeless shelter, where they lived for a full decade — basically, Chapman's entire childhood. To deal with the pressures of his life on the streets of The Bronx, he threw himself into dance and discovered a singular talent for breaking. He would bring the money he earned from street performing back to his father; eventually the two had saved enough to move out of the facility and become independent. The dancer let his dreams carry him through a situation that would break a lot of weaker people. "That's the power of dance," Paula might say.

Eliazer Chapman impressed the judges with his strength and control, as well as his varied routine. Often, the panel will criticize Street performers (and Stage hopefuls, as well) for leaning on tried and true moves and for not showing the judges enough of what they can do. That wasn't a complaint here. "I thought it was exciting," Nigel Lythgoe said after the audition. "You promised us something raw, something exciting...I think you gave it to us." They also appreciated Chapman's drive, determination, and confidence. And, even the best technical dancers won't succeed in this competition without those traits.

Obviously, Chapman's efforts were rewarded with a ticket to Vegas. I'm looking forward to seeing how he handles that new challenge, and seeing him take on the choreography of Dave Scott, NappyTabs, and the rest. In my opinion, he's already risen above every obstacle life has thrown at him. Vegas week should be a piece of cake.