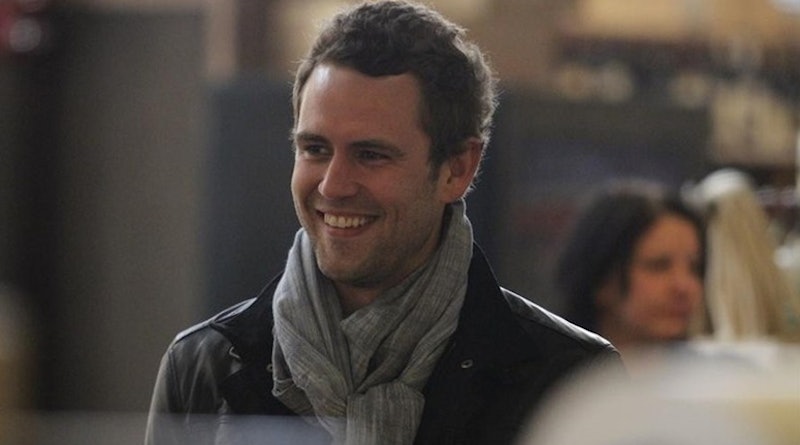 Two-time Bachelorette contestant and frequent scarf-wearer Nick Viall has been painted as a villain time and time again, but is that really the case? His actions may brand him as one of the bad guys, but if you look at his words, well, I think he may be one of the nicest Bachelorette contestants we’ve ever had. In fact, if things don’t work out this time around with current Bachelorette Kaitlyn Bristowe, I think Nick Viall would make a really fantastic Bachelor for the show’s upcoming season.

If you’re not up to speed on Nick, let’s do a quick dive into his past on The Bachelorette. He started out on Bachelorette Andi Dorfman’s season, where he and Andi became pretty enamored with each other pretty fast. Like, a little too fast for those of us watching at home. Anyway, Nick lost Andi’s heart to Josh Murray, and when Nick and Andi came face-to-face on the After the Final Rose special, Nick asked Andi on national television why she would sleep with him if she wasn’t going to pick him. Anyway, Nick came back for more Bachelorette when he found that Kaitlyn Bristowe would be the next woman trying to find her husband on national TV. Their chemistry was instantaneous, and Nick and Kaitlyn ended up sleeping together pretty soon after.

Kaitlyn was condemned by the public for sleeping with Nick, and Nick quickly jumped to her defense on Twitter:

Nick’s defense of Kaitlyn is the exception, not the rule, when it comes to many sexual encounters between men and women, and I applaud Nick for not implying that he had no hand in any of this. Nick would make a great Bachelor, for this reason and a few more I’ve outlined below.

Nick Is Super In Tune With His Feelings

I am loathe to believe that everything in this world is a publicity stunt, so I think that Nick found out that Kaitlyn was the Bachelorette and really just needed to get in to see her. Recognizing how one feels is paramount when having to decide between 25 different women as the Bachelor.

Nick Is Ready To Take A Chance On Love

What bigger chance is there to take than to show up to a filming that you’re not really a part of and ask for a chance to try for the heart of a girl you’re totally feeling? Nick really put himself out on a limb in getting onto this season of The Bachelorette. He knew he’d be portrayed as a villain, both to viewers and to the other guys in the house, and he did it anyway. Bravo, Nick.

As we’ve seen above re: Nick and Kaitlyn getting it on, Nick is not shy about saying what he needs to say and doing what he needs to do. He and Kaitlyn felt an attraction to each other, and they acted on it. He let the world know that it was important to him, and he’s standing by Kaitlyn in the public eye. He knows himself, and I think that’s important in being a Bachelor.

Nick Already Knows What The Bachelor/ette Process Is Like

To film on a show like The Bachelor or The Bachelorette is totally crazy: There’s a whole world that goes on behind the scenes that no viewer will ever be privy to. Nick has seen how the reality sausage gets made, so he’s apt not to get scared away if something goes totally weird or totally wrong. He seems pretty unflappable, and that’s important in being the main man on The Bachelor.

See? Nick would make a fantastic Bachelor — we just have to train him not to kiss and tell.