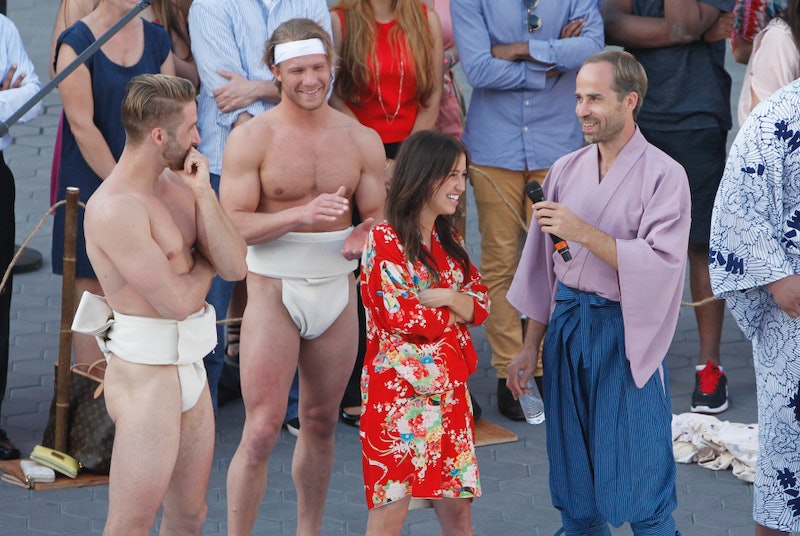 Well, Bachelorette fans — it’s all been leading up to this, or at least that’s what the producers of the show would have you believe. We’re about to see Kaitlyn have sex on camera! Well, not exactly see it, but definitely see the aftermath. The Bachelorette is acting like having sex is the most scandalous thing that anyone could ever do on the show, but in reality, there have been far more scandalous moments on The Bachelor and The Bachelorette than getting down with someone you’re super attracted to. In fact, it’s even been pretty well documented that a bunch of people have had sex before/outside of the Fantasy Suite — just no one talks about it.

Though this may seem like the craziest thing to ever happen on The Bachelorette, here are a few more dates/instances on The Bachelor/ette that were more "scandalous" than Kaitlyn having sex outside the Fantasy Suite.

On Chris’ season of The Bachelor, the gang was in New Mexico and Chris and Carly got sent on a one-on-one date to a sex guru. This was their first solo date as a couple, and they had to do strange stuff like gaze into each others’ eyes, take off each other's clothes, and practice weird breathing. Finally, the date stopped when Chris and Carly (and the viewers at home) deemed themselves too uncomfortable continue. So hard to watch.

Kaitlyn having sex on her season isn’t what worries me. A date that, in my opinion, was way worse was when she brought a group of suitors to teach sexual education to a classroom (that turned out to be filled with child actors and not really a bunch of schoolchildren). Shocking here was that so few of the men knew what their equipment was made of, as well as the equipment of any potential sexual partners. It was embarrassing for everyone, including the kids.

The producers made this date seem like it was hot and racy and sexy — Lucy and Andi and Juan Pablo were doing a naked photo shoot! Really, it was just totally exploitative. Lucy is really comfortable naked, which is great for her, but Andi didn’t seem as psyched and just had to kind of go along with it lest she be kicked off the show, which is a very real possibility when you say no to a date on The Bachelor. All in all, the girls posed in their underwear, but it’s not like they had a choice, and that’s gross.

Once again, the Bachelor double standard of sexual activity rears its ugly head. When Juan Pablo and Claire hooked up in an ocean in Vietnam, he seemed just peachy keen about it — until the next day, that is, until he basically told Clare that he couldn't be with a woman who would hook up with him in the ocean because he needs a role model for his young daughter. Porque, Juan Pablo? He seemed to enjoy it just fine when it happened. It was a disgusting moment in an overall very chauvinistic season.

5. Jason Not Being Able To Pick A Wife

Jason Mesnick proposed to Melissa, a former Dallas Cowboys Cheerleader, but quickly did a “backsies,” saying that he actually made a mistake and wanted to marry Molly, the show’s runner up. Jason got to break up with Melissa on national television, take his engagement ring back, and then give it to Molly, who accepted. I mean, come on, you guys. He just replaced one woman for another (like they were interchangeable), and that really sucks.

6. Everything About Bentley & Ashley Hebert

Bentley Williams messed with Bachelorette Ashley Hebert (now Ashley Rosenbaum) during her season, telling her how into her he was and then going back to the cameras and laughing about how he would break “the ugly duckling’s heart.” I mean, what a d**k, right? Turns out he was wishing that the Bachelorette that season would have been Emily Maynard, and Bentley just wanted his 15 minutes of fame. Don’t think that worked out for you too well, huh, Bentley?

Yay, more slut-shaming! It is reasonable enough to assume that if you are really into someone and want to get into a relationship, you are going to knock boots with him or her, right? Well, when Nick (who just jumped into Kaitlyn’s season on The Bachelorette) didn’t get Andi’s heart during her season, he decided to question her about the fact that they had sex, and he did it on national television. He phrased it, “If you don't love me, why did you make love to me?” but what it seemed like he really was saying was, “you didn’t pick me, so I’m going to embarrass you in front of everyone you know.” Hearts get broken, Nick, but you don’t have to be so awful about it. Andi is free to sleep with whomever she wants, even you.

So, is Kaitlyn’s having sex a big deal? Nope, not at all. We’ll just have to tune in to see what the undeserved fallout will be like.