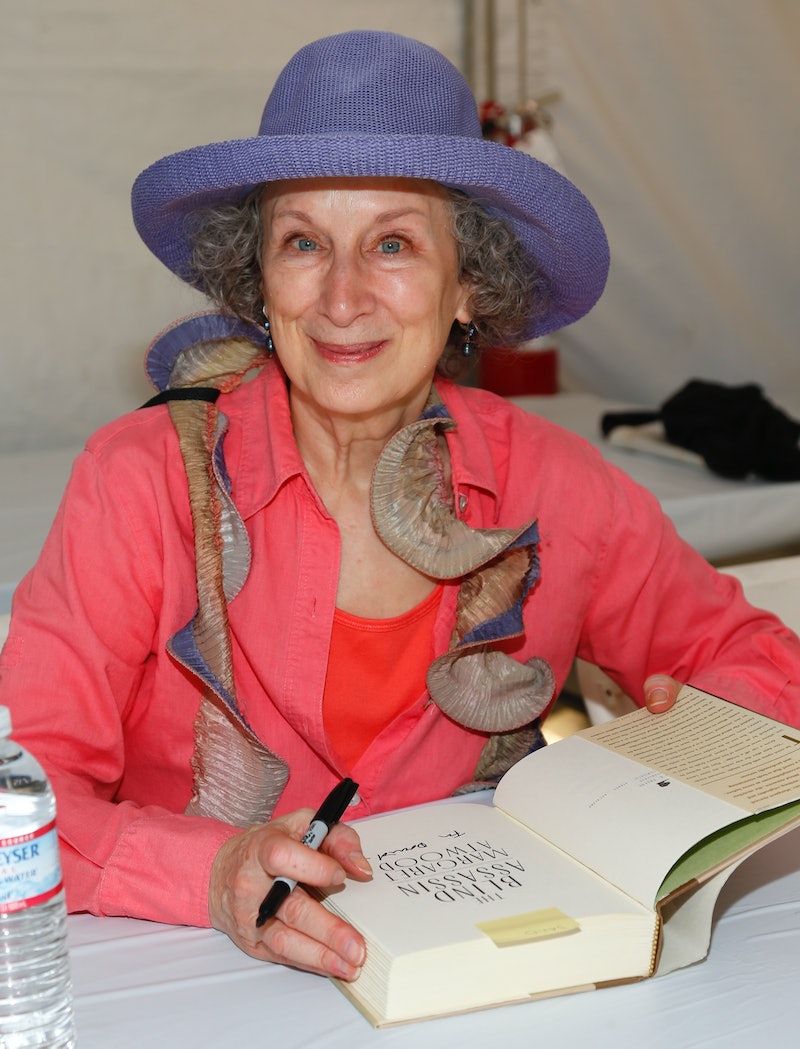 How's this for something to geek out over? Award-winning novelist Margaret Atwood is writing and drawing three comic strips for the crowd-funded nonfiction mixed-text and comic story print anthology The Secret Loves of Geek Girls. The project went live last week and has already exceeded its Kickstarter goal by more than $10,000 (and earned a whopping $50 more in the time it took me to write that sentence!). Meaning all the geek girls' secrets are about to go public in a really big way.

The Secret Loves of Geek Girls is the passion project of comics editor Hope Nicholson, who said on Kickstarter that the anthology seeks to fill a void in the life of the geek girl by offering advice on “relationships and crushes, rejections, unwanted advances, and general romantic and sexual entanglements,” which is usually only written with the geek guys in mind. Atwood, who is already featured in cartoon-form on the cover of the anthology, is contributing three comic strips to the anthology based on her own experiences as a young, nerdy woman. Adding to the fundraising success, Atwood also placed the original artwork of her cartoon up for auction.

In a recent interview with Torontoist, Nicholson talked about the coming-of-age experiences that informed The Secret Loves of Geek Girls, saying:

"It was always this feeling of being told, ‘You can have romance stories and advice, or you can be nerdy, but there is no crossover.’ Which, as I’ve gotten older and I’ve built and found these communities of amazing, nerdy women, I realize is absolutely ridiculous."

Other artists involved in the anthology include Renee Nault, who drew The Handmaid's Tale graphic novel, Danielle Corsetto of the Girls With Slingshots comics, Jen Vaughn, the artist behind Avery Fatbottom , and tons of other great talent.

One of the anthology's writers, Tini Howard, tells Bustle that, “Confessional writing has long been a part of the writing tradition of women ... For me, Secret Loves was a chance to talk about my real past as a geek girl — not the past approved by the guys in charge.”

One of the most unique and important traditions in my life is the hallowed Geek Girls’ Night In — an evening where ladies share stories, bond over comics and video games, celebrate their triumphs, talk about their relationships, bemoan their neuroses, and share strength and affirmation with other women. This anthology is like a portable Geek Girls’ Night In.

All the positive buzz about The Secret Loves of Geek Girls is only further proof that women in comics are definitely continuing to shine, with no sign of stopping — and that's exactly how we want it to be. Female comic book writers were all over this year's BookCon, which recently highlighted the successes of other cartoon mavens like G. Willow Wilson and Margaret Stohl. Fangirls, get your own felt tip pens ready, because there's never been a better time to be a woman in comics.

Ed Note: An earlier version of this post said that the quote by Hope Nicholson to the Torontoist was said by Margaret Atwood, and that Hope Nicholson spoke directly to reporters at Slate. Additionally, the post reported that Margaret Atwood created the anthology instead of is contributing to it. We regret these errors.