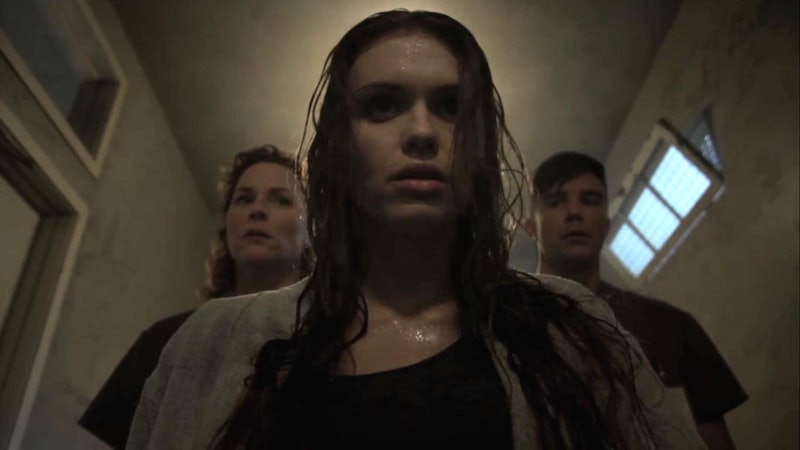 Let me start by saying this might be the most excited I've ever been for a Teen Wolf season premiere. While Season 4 of the hit MTV series had its flaws, confusing moments, and plot holes (where the hell is Danny?!), from all the trailers and sneak peeks I've seen so far, Season 5 looks to be a faster, scarier, more well-oiled Teen Wolf machine. And a lot of that is thanks to the new creeptastic villains formidably and mysteriously named The Doctors. As with any season, I'm here to dissect every last frame of every trailer and episode to come up with new Teen Wolf Season 5 theories for the episodes to come. At the moment, there are a ton of different ways the show and season can go, which just makes everything even more exciting.

There are a few undeniable facts of which we have been made aware about this season. We know that the gang is finally in their senior year (aside from newbies Liam and Mason of course), we know from the Season 5 opening scene sneak peek that Lydia is in Eichen House, we know Parrish is a supernatural creature, we know the scary Doctors are the big bads this season, and finally, we know that Tyler Hoechlin, aka Derek Hale, is sadly no longer a series regular. But let's not talk about that right now, because I don't want to become depressed. Here are a few Season 5 questions from what we've seen so for, and some theories about their answers.

1. What Are The Doctors Doing?

Right now, it seems as though the Doctors are experimenting on people and if that's the case, it is obviously against their patients' wills. There is a scene from the trailer that shows people in test tubes, as well as a snippet of a werewolf-looking creature with a strange, non-werewolf-looking hand attacking Scott. We also see a metal-looking man attacking Parrish, and the new opening title sequence ends with someone on an operating table and one of the Doctors looking over him in a foreboding way.

It seems like the Doctors are exclusively experimenting on supernatural creatures, but why? Just for their own sick game? Or is there something bigger at play? Could they be looking for something in particular? Are they hoping to cure some strange disease? Do they want to start a supernatural army? Ugh, poor Beacon Hills. As if its residents haven't been through enough already.

2. Why Is Lydia In Eichen House?

This goes hand in hand with The Doctors, in my opinion. I have a theory that The Doctors operate out of Eichen House and the facility's staff brings them supernatural creatures on which to experiment. I think Lydia may have seen something with her Banshee powers that caused her to break, sending her to Eichen House and causing her to find out about the Doctors.

I think the Doctors will try and experiment on Lydia, potentially to give her more powers, to help enhance her existing powers so they can figure out what she's really capable of, or to use her ability to be immune to the many different supernatural elements that we already now don't effect her. Maybe once in Eichen House, she learns of the horrible ways her friends might die and that's why she rushes to find them in the season premiere's opening scene.

In the Season 5 trailer, we see Scott and Stiles talking to Dr. Valack for a split second. The doctor also appears to possibly be talking to Lydia later in the trailer, but it's hard to be sure. Either way, it's obvious that Valack will be more involved this season, not only from these snippets, but due to the fact that he was introduced at the tail end of Season 4 and clearly was more involved in Scott and his pack's world than we could ever know.

Plus, we still have to find out what he showed Peter Hale. I think the most likely answer is preview of the future, which is what made him scream the way he did in the finale. Could Dr. Valack be involved with the Doctors? Is he one of them? And how does his third eye come into play? Perhaps he's the one who shows Lydia through his third eye what the dreaded Doctors are going to do to her friends, causing her to freak out as she did.

Once again the trailer shows us the new kid Theo, played by Pretty Little Liars ' Cody Christian (aka Mike Montgomery). It seems that he knows Scott, but what do we really know about him? Stiles doesn't seem to trust him, which might cause a rift between the two best friends. In the end, I'm always on Stiles' side, because he sees things in a much clearer way, while Scott tends to just see the good inside of people.

If Theo could causes a divide between Scott and the rest of the pack, we're in for some serious trouble in Teen Wolf Season 5. Because as we all know, an Alpha is only as strong as his pack.

More like this
There's Plenty Of Drama Brewing To Warrant A 'Summer House' Season 7
By Brad Witter
What Makes A Sally Rooney Sex Scene So Hot?
By Samantha Leach
Everything To Know About 'Grey's Anatomy' Season 19
By Brad Witter
Everything To Know About A Possible Season 3 Of 'The Flight Attendant'
By Gretchen Smail
Get Even More From Bustle — Sign Up For The Newsletter