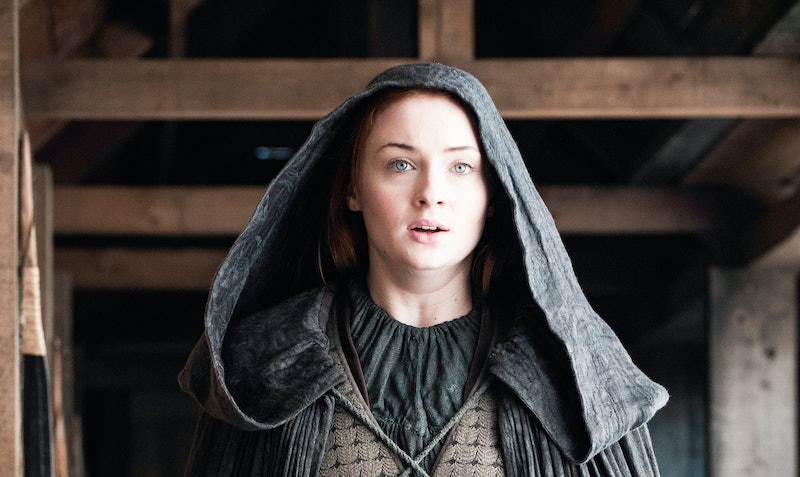 Who are you looking at? Oh, me? Don't worry. I'm just twiddling my thumbs since the Game of Thrones Season 5 finale, trying to keep myself from going crazy waiting for the show to come back. But as it turns out, thumb-twiddling is A. not all that distracting and B. doesn't burn any of these anxiety calories, so I think I need to find something else to occupy my time. Something like getting real heavy into Season 6 Game of Thrones casting reports. We won't get any official answers until San Diego Comic Con in July, but until then, the very intelligent folks at the fan sites Watchers On The Wall and Winter Is Coming have been analyzing casting notices to collect clues on which new characters we might be seeing next time around.

This is particularly exciting because, as you may recall, this next season will be the first time that Game Of Thrones cannot rely on the books for plot, unless of course, author George R.R. Martin has a late-in-game surge of productivity and somehow releases The Winds Of Winter before the show's sixth season begins in 2016. I still have my fingers crossed for that, but it also isn't super likely, so scanning these notices for details is probably our best bet at the moment. Producers are very smart about the way that they phrase them, so as not to give too much away about upcoming storylines, but this isn't our first time at the rodeo, right? So nothing's slipping by us. Here are some of the very exciting and mind-blowing characters that we can expect going forward.

Euron is Theon Greyjoy's uncle, a notorious pirate who figured prominently in A Feast for Crows and A Dance with Dragons, but who hasn't shown up in the HBO series yet. But it seems like that's about to change, as the casting notice calls for a man in his 40s to late 50s to play "an infamous pirate who has terrorized seas all around the world. Cunning, ruthless, with a touch of madness." Yeah, that sounds about right for a guy who cut out the tongues of everyone aboard his ship so they couldn't speak about what they'd seen.

This guy is ruthless in a way unlike than Euron Greyjoy, but he's working on a similar degree: Meet Samwell Tarly's father. Or at least I think we get to meet Sam's father, based on the following description:

...one of the greatest soldiers in Westeros- a humorless martinet, severe and intimidating. He demands martial discipline in the field and in his home.

As you may remember, Randyll Tarly is no joke, giving his son the option to either take the black as a member of the Night's Watch, or die mysteriously in a hunting accident so his younger brother could take up the mantle of heir. It's also noted that this role is "centrally involved" with another Season 6 protagonist, which could mean we're seeing a lot more of Sam as he journeys to the Citadel to become a Maester. Fingers crossed.

But Randyll isn't the only member of the Tarly clan who's likely to get some screen time — the casting notice was also searching for the following family members:

Mother, in her 50's. She's a sweet, plump, and adoring mother, and has a soft spot for one of her children who benefits from her decency.

Sister, in her early 20s. She's a kind, friendly, and unpretentious woman.

Brother, in his early to mid-20's. Athletic, a good hunter, an excellent swordsman, manly, not particularly bright but the favourite child of the father.

Sounds like a dead ringer for the Tarlys to me, and suggests that Gilly might not travel to Oldtown after all, like she does in the series, but instead journey to Horn Hill, where the Tarly family hails from, to take a place in their household and raise young Sam.

Yet another character from A Feast for Crows whom we haven't come across yet in the series: Septon Meribald is similar to the High Sparrow, in that he roams around barefoot caring for those in need. Which is why it seems pretty likely that he's the character described by the following casting blurb:

Priest, in his 40’s or 50’s. A gruff ex-soldier who found religion. Now a no-nonsense rural priest who ministers to the poor of the countryside. He’s salt-of-the-earth man who has weathered many battles.

In the books, he also guides Brienne of Tarth and Podrick around the countryside for a while, so it would be nice to see them getting some direction for once instead of just missing opportunities to rescue the Stark girls.

The majority of the other characters from that particular notice are specified as being needed only for one or two episodes, so it's likely that they would either be just passing through. But there is a group of three boys about whom we get a surprising amount of details, and no specifications about how long they'll be used for. We know that two of them spar with a wooden sword and that one has green eyes, which would make him a good candidate for "Young Ned Stark" in a flashback sequence, as green is the eye color of one Sean Bean, who played adult Ned Stark.

So these are my best guesses for now, but bear in mind that I could either be interpreting these entirely wrong, or the producers could just be completely messing with us. So thumb-twiddling might be the best use of your time after all.