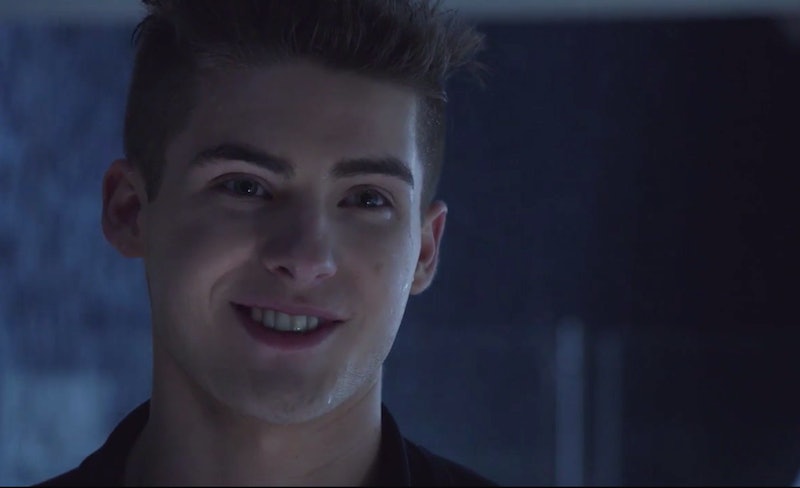 Prediction time: I wholeheartedly believe that Season 5 of Teen Wolf might be the best one yet. Sure, it's got a few negatives right off the bat (Derek where are you?!), but from what we've seen of part one of the season premiere, the show is leaner, meaner, and faster paced than what we've seen in its recent history. The episode picks up about six months after the Season 4 finale, as the remaining members of Scott's original friends (plus Malia!) are taking on their senior year and with that comes all kinds of crises. The scariest of them all definitely has to be the emergence of The Doctors as this season's newest big bads, but one of the more mysterious possible problems comes in the form of a new beta wolf named Theo. And what's weird about Theo is not just that he's suddenly appeared to meet Scott and his pack, but that Scott and Stiles actually know him from their childhood. Scott and Theo talk about how he might not be the easiest to recognize since the last time they saw him was in the fourth grade. So where was Theo and why has he returned now?

Theo says he came back to be in Scott's pack, because he heard Scott was a True Alpha. What's strange is that he's here to join the pack right after another werewolf with enhanced powers (thanks to The Doctors) told Scott he heard about his True Alpha power and wanted to see it and take it for himself. Where are people getting this information? Is there a werewolf online forum or newsletter we don't know about yet?

All I know is that Stiles seems to be really suspicious of the guy and I can't help but agree with him. The timing just seems strange, almost as if The Doctors deployed the attack werewolf and Theo at the same time; one to try and defeat Scott through strength and brute force, and the other to try and infiltrate his group and cut off his pack power source. Obviously, it's also likely that Theo has nothing to do with The Doctors, but once again, then where has he been for almost half his life? He very clearly says he's back living with his family so that must mean they sent him away somewhere — I want to know where and why.

What if his family sent him away because they saw he had been bitten and was turning into a werewolf? So to protect him and everyone in Beacon Hills, they sent him away somewhere where he could control his abilities. Scott doesn't seem too fazed by Theo's sudden appearance, at least not as fazed as he was by the guy who all of a sudden wanted to kill him. But that's probably Stiles' fear: Scott trusts too much and he doesn't realize that something unassuming can actually be more dangerous than something outrightly evil. Here's a thought, maybe Stiles is completely right and worst case scenario: Theo isn't even who he says he is. Or maybe Stiles is just paranoid and Theo really is a good guy looking for a pack because, like he says in the trailer, "everybody knows that lone wolves, they don't make it on their own."