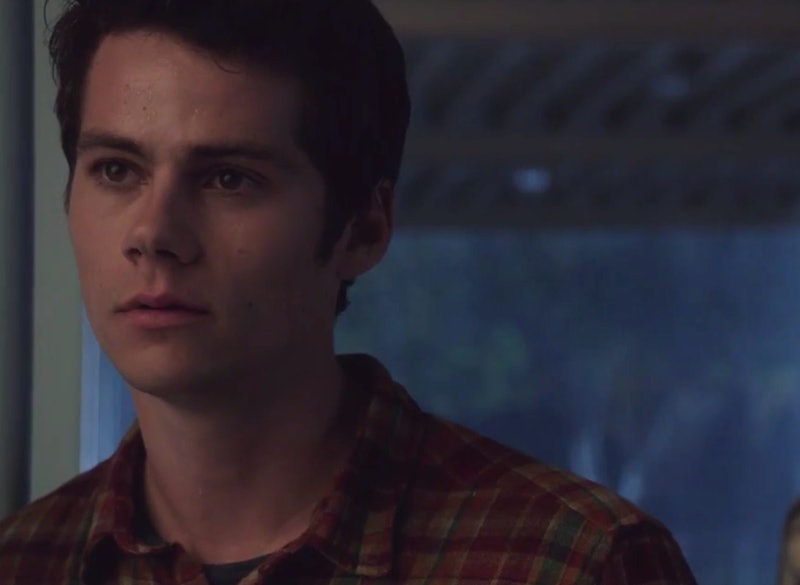 Guys, this it. This is my worst nightmare. In the Season 5 premiere of Teen Wolf, Lydia is in Eichen House in a flashforward as Doctor Valack (without his third eye for some reason?!) asks her what happened to her friends during senior year. As she tells him that she doesn't remember, we see flashes of terrible things that are happening. But the worst by far is what she sees when Dr. Valack asks her about Stiles. Lydia's brain cuts to a single, terrible image: Stiles's lifeless-looking body sprawled out in his overturned jeep with fire around it. Was that a premonition of what's to come? Will Stiles die in Teen Wolf Season 5? I swear if that happens, I will revolt. I will take to the streets outside of MTV and Teen Wolf creator Jeff Davis' office and I will protest. But before I get to ahead of myself, I might as well just analyze the scene in question and see if any of Lydia's visions will actually come true.

Lydia begins and ends the episode in Eichen House. At first, she's trying to escape the mental institutions so she can warn her friends that they'll die, and is stopped, but not by the guards (because she straight up beats them up). Instead, she is stopped dead in her tracks by Aiden, who tells Lydia that her treatment is not over yet. At the end of the episode, Aiden returns to find out what Lydia remembers, until she realizes he's just a vision and Dr. Valack is actually asking the questions she doesn't want to remember.

The flashbacks for Lydia (and in our case flash-forward to what could be coming this season) begin with Scott letting out a fierce Alpha growl that sounds more like anger than anything else. It's then followed by Melissa McCall slapping Sheriff Stilinski in the face as if they've had a falling out. Next comes Kira leaving in her parents' car as she watches Scott through the backseat window. Scott is standing in the rain as lightning takes the street lamp out. After that is a snippet of Parrish standing in front of fire with his eyes glowing orange, which suggests he could be a phoenix (I hope!). Next comes Malia, who is overwhelmed by the shadow of the Desert Wolf, which makes her sit in fear next to a big rock. Finally comes the Stiles moment no one wants to see.

Are we supposed to believe that Scott either alienates all the people he loves or lets them die this season? The only person in the regular cast that we don't see is Liam, but aside from that possibly meaning he's not dead, what does it tell us? Clearly this season is going to be darker and scarier than ever before, but I can't imagine a Teen Wolf without Stiles. That would be like The O.C. without Seth Cohen, it's impossible to do, right? The theory that I would like to come true is that these images Lydia is seeing and this version of Dr. Valack are things that could happen in the future, but haven't occured yet and aren't set in stone. That's why she says she has to warn her friends that they're all going to die. This would mean Stiles is still alive and can potentially avoid dying the way he appears to in her visions.

The one good thing about these visions is that it proves Davis and the Teen Wolf writers are going to answer some burning questions we've had for quite a while now. Dr. Valack is back and seems to have a bigger role this season, the Desert Wolf mystery might be solved, we may finally find out what creature is, and we're getting a glimpse into the pack's future. This all comes at the perfect time, now that they're in senior year and finally dealing with that uncertainty, along with the terrible things that go bump in the night that they have to fight. Obviously if the future includes a dead Stiles, I'm not onboard, but I'm interested to see how things shape up throughout this season of Teen Wolf.

More like this
The Time Traveler’s Wife Book Has A Heartbreaking Ending
By K.W. Colyard
Selena Gomez Joked About Her Relationship Status In Her ‘SNL’ Monologue
By Grace Wehniainen
‘SNL’ Referenced Jesse Williams’ Broadway Leak In A Chaotic Theater Sketch
By Grace Wehniainen
Selena Gomez’s ‘SNL’ Hosting Debut Had Twitter Gushing Over ‘Barney’ & Wigs
By Stephanie Topacio Long
Get Even More From Bustle — Sign Up For The Newsletter