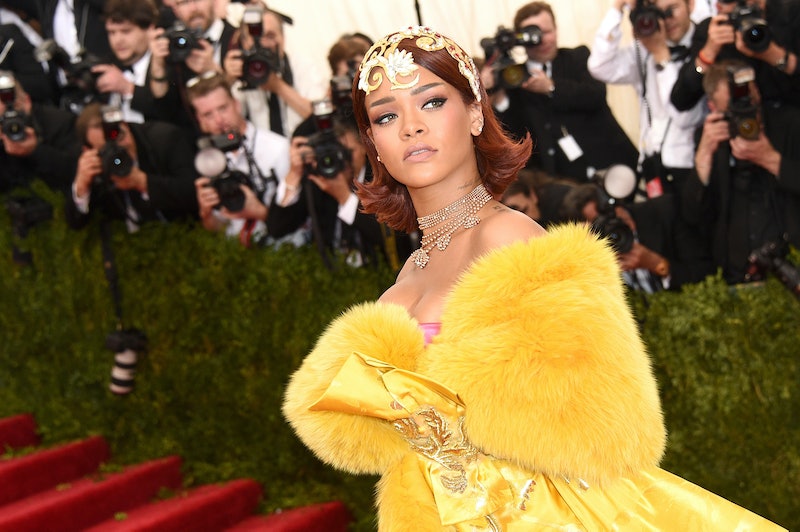 I pride myself on being a pretty patient person, but even I am at my wit's end wondering when this next Rihanna album is going to come out. We know she's working on her eighth studio album, presumably titled R8, because she's been teasing its release for months now, promising it'll be out sometime in 2015, but the year is already half over, and we still don't have much information. One thing we do have, though, is two singles, "FourFiveSeconds" and "Bitch Better Have My Money," which she released painfully slowly, and little snippets of other tracks on R8, leaked by either Rihanna herself or her collaborators.

I have to assume that anyone releasing audio has Rihanna's permission to do so, but even if they don't, I'm not convinced that's really the worst thing. We've just been waiting so long for any new music from our girl — her last album, Unapologetic, came out three years ago in 2012 — that I'm starting to get desperate.

When it comes to new music, the longer an artist spends refining it and passing it around to other members of his or her team, the more opportunities there are for the content to leak. Just look at Madonna's most recent album Rebel Heart , which was given a release date of March 2015, only to be leaked in almost its entirety by an Israeli hacker who stole it off of Madonna's personal computer. That's an incredible (and illegal!) invasion of privacy, and the man is being prosecuted for it, but there was a bright side to the situation, which was that Madonna ending up releasing the album for pre-order on Dec. 20, 2014, with six songs becoming available for download right then. It was her way of turning a situation she had no control over to one she could wrangle.

And while I'm not saying I want something similar to happen and force Rihanna's hand, the longer she delays this album's release, the more likely it becomes. Just recently, a producer named Mitus who has worked with Rihanna in the past posted two sound bytes on Instagram that sound mighty familiar to Rihanna fans, using the caption to tag a songwriter named Alicia Renee who's been confirmed as a collaborator on the album. And then right on the heels of that, a Roc Nation sound engineer took to Vine to share two more clips that are alleged to be R8-related as well.

All I'm sayings is it looks like people are getting impatient, Rihanna, and why wouldn't they? You were putting out an album a year from 2005 to 2012, only skipping 2008, and now it's been three? I feel like you've already been pretty lucky that the full songs haven't leaked, so why not just given them to us in their entirety? Pleeeeeease? Madonna did it, so you know it's cool.