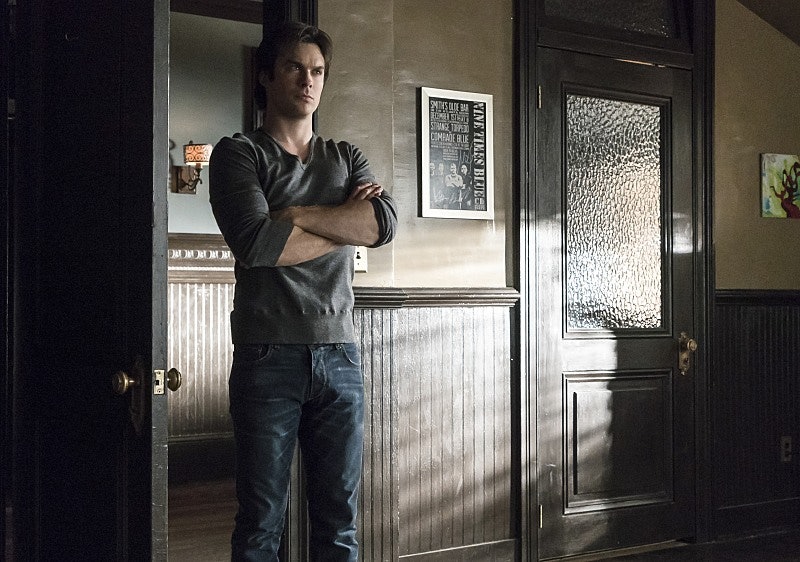 While there are plenty of reasons out there to get excited about summer, one of the biggest downsides to this time of year is due to the fact that TV fanatics like myself are deprived of some of our most beloved shows until fall comes around. Take The Vampire Diaries Season 7, for example. It's already been well over a month since the Season 6 finale, and yet we still have several months to go before Mystic Falls is back to being a regular part of our Thursday night routines. Not to get all vampire pun-y on you, but that really, really sucks. However, that's not going to stop me from writing about this series as much as possible. It may be summer, but I'm still thinking about TVD 's very own Damon Salvatore.

Lack of bloodlust and super vamp speed aside, Damon can actually be pretty relatable when you stop and think about it. In fact, I'm willing to bet you may even be the Damon Salvatore of your friend group at summer camp. He's passionate and outgoing and has an endless amount of delectable sarcasm that no one else can ever hope to match. (Plus, you just know he'd be amazing at all those outdoor activities as long as that daylight ring stayed in tact.) So, just in case you've ever experienced the highs and lows of summer camp, at least take comfort in the fact that you are not alone. Damon is there for you and has the perfect reaction to every possible scenario you could encounter. Such as…

1. When You're Forced To Listen To Your Bunkmate's Boy Troubles

I've got a skit to memorize and a ton of s'mores to consume. Let's move this along.

2. When The Bugs & Insects Drive You Insane

It doesn't matter how many you kill. More just keep coming back in its place. Hope you remembered to pack that bug spray.

3. When It's Charades Night

You may try and act like you're too old for the game, but deep down you still kinda sorta love it.

4. When A Newbie Takes Your Seat At Lunch

Looks like someone needs to get updated on camp decorum.

5. When You Get Nominated As Team Captain In Color Wars

You feel almost drunk with power (and popularity).

6. When You Neglect To Put Enough Sunscreen On

7. When The Hot Camp Counselor Notices You

Or at least that's what you're going to start telling all of your friends.

8. When Someone Chooses To Stay Inside On A Beautiful Day

I mean, why come to camp at all then?

9. When It's Time For Your Parents To Come Get You

Because that means summer is officially over. And not even immortals like the sound of that.