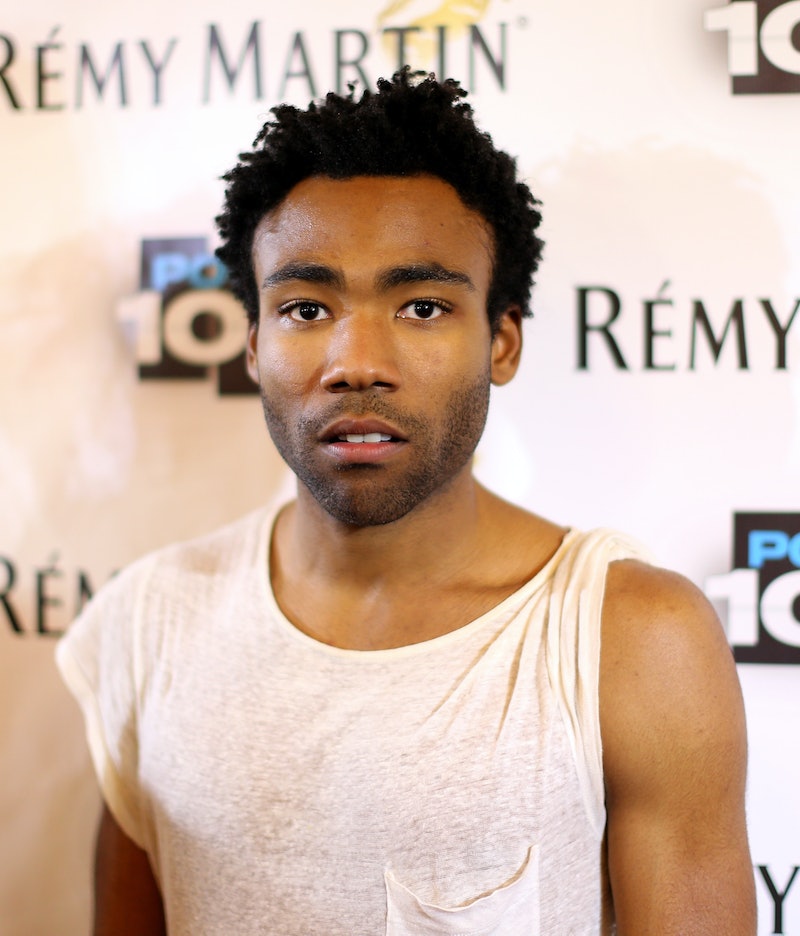 One of the best surprises in Magic Mike XXL shouldn't really be much of a shocker: Donald Glover, delivering a dynamic, compelling performance that involves acting, singing, dancing and, yes, stripping. For fans of the star, the fact that he has so many skills should be common knowledge (well, save for the ability to strip), as Glover has always been known as a multi-talented man. His credits include starring on Community and rapping as Childish Gambino, but as his latest project shows, acting in films is really his true calling. So will Donald Glover be in more movies after Magic Mike XXL ?

He better! In the sequel to 2012's stripper-filled blockbuster, Glover's role as Andre, a stripper who moonlights as a poet and musician, is a major highlight. Whether it's his freestyle rap to a strip club visitor or his gorgeous rendition of "Marry You" during a show, the star steals every scene he's in. With talent like that, it'd seem like a film career (and a Spider-Man role...) would be inevitable — and thankfully, it is.

Next up for Glover is a role in Ridley Scott's The Martian , out in October. In the sci-fi drama about an astronaut (Matt Damon) stranded on Mars, Glover will play Rich Purnell, a NASA employee. Little else is known about the highly-anticipated film, but with a cast that includes Damon, Jessica Chastain, and Kristen Wiig, it looks like the actor will be in very good company.

If you're about to commend him on getting his film career off to a great start, though, hold up: while Magic Mike XXL is one of his most prominent roles to date, Glover has actually appeared in several other movies. Need a refresher? Check out Glover in these six films below:

In this underrated 2013 comedy about a high schooler (Aubrey Plaza) set on losing her virginity, Glover played Derrick, a fellow student who helped Brandy in her quest by, well... you'll see if you watch the clip.

Glover starred in February's sci-fi horror film as Niko, one of the creators of a serum able to bring the dead back to life. Spoiler alert: it works.

In 2009, Glover, with his group Derrick Comedy, starred in a movie about a teenage detective team hoping to solve a murder. The film didn't make much money, but it did co-star Aubrey Plaza, Ellie Kemper, and Veep's Matt Walsh, so it's a must-see for comedy fans.

4. Clapping For The Wrong Reasons

Because Glover is apparently the busiest man on Earth, he wrote and starred in a short film back in 2013 that coincided with the release of his second album, Because the Internet.

Who wasn't in the 2011 comedy? Glover starred alongside Jason Segel, Amy Adams, Rashida Jones, Alan Arkin, Jim Parsons... the list goes on and on.

6. Alexander And The Terrible, Horrible, No Good Very Bad Day

Last year's family comedy featured Glover as Greg, a video game executive who considers hiring Ben (Steve Carell) as a designer. Due to the terrible, horrible events of the movie's title, their meetings don't go as planned, but at the end, it seems like Greg is charmed by Ben's disastrous introduction and gives him the job.

It'd be very understandable if Glover wanted to keep working on his music or his TV career, since both are clearly going well, but if he chooses to give them all up and focus solely on his film roles? We'd be totally supportive, because the actor makes everything he's in, from dramas to comedies, so much fun to watch.