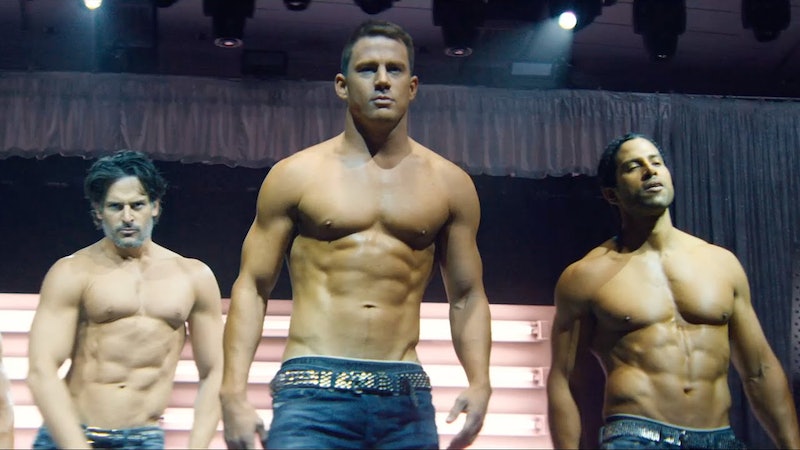 The world is less than 48 hours away from the release of Magic Mike XXL, the sequel to 2012's suprise hit about strippers from Tampa. This time around, Magic Mike and his island of misfit (and ridiculously buff) boy toys are back in the game to compete at a stripping convention. Based on that premise alone, and the tantalizing trailers, it's clear that this time around, the aim of this film is quite clear: Be sexy and be entertaining. According to some early reviews that have come out for the film, Magic Mike XXL succeeds in doing so... with flying colors.

Overall, the reviews for the movie are positive. The critics seem to find that what it lacks in story, it makes up for it with fun. Every review I read, even the ones that summed it up as cinematic fluff, saw that Channing Tatum really was just looking to make a summer blockbuster and put on a really great show. However, some critics validated the film in its aims and how much thought was put into paying attention to audiences that are too often ignored by hollywood. What I gathered from the reviews is quite simple: if you are seeing Magic Mike XXL with the expectation of having a blast, turning your brain off, and seeing some very sexy man dance... then your wishes will be greatly, greatly fulfilled.

Take a look at what reviewers are saying:

Todd McCarthy thinks quite highly of the crowd-pleaser writing, "Magic Mike XXL is ridiculously entertaining. " He also gets why audiences respond the way they do to the franchise: "At least as much as in the original, what makes XXL go down so enjoyably is that these guys are just out to please; their idea is to make all the ladies in their audiences feel special and catered to, that it's all about them and not about the male ego."

Peter Debruge wasn't completely charmed by Tatum and co., "Written raggedly enough for the actors to bring their own chemistry to what aspirationally feels like one of Robert Altman’s backstage dramas (a la “Nashville” or “Ready to Wear”), Magic Mike XXL is most fun when it isn’t trying to justify itself, but just kicking back with the guys — or better yet, giving them a fresh excuse to show off their creativity." OK so the writing might not be great... but we still get the dancing guys, right?

Magic Mike XXL might not be gunning for an Oscar, but it's certainly raring to go. Michael Phillips totally gets that, "[The movie] strips down to its narrative skivvies and says, in effect: Let's not kid ourselves. You're not here, with your wad of singles in hand, to see a movie about the dark night of Magic Mike's soul. The script by Reid Carolin is hilariously casual in its plotting. It's an amiably ramshackle road-trip movie, with the guys reuniting because it feels so good and because there's a male stripper convention in Myrtle Beach, S.C." I'm sold.

Though Channing Tatum was himself once a stripper, there's not a lot of reality going on in the film, according to Katie Rife, "Like an old Hollywood musical, Magic Mike XXL takes place in a universe close but parallel to our own, a fantasy realm where people randomly break out into song—or, in this case, breakdance-influenced dance numbers set to ’90s sex jams." She finds the film a bit pandering at times (specifically to millenials, the LGBT crowd, and "cougars"), but does get what all the fuss is about, "Magic Mike XXL is a piece of arm candy, as shallow as a mud puddle and just as bright. But that doesn’t mean it isn’t fun to hang out with."

Kate Erbland had me at, "There is so much throbbing in Magic Mike XXL.” According to her review, it's actually not Tatum who steals the spotlight in this big summer sequel, "Although the film’s jaw-dropping final act, centered on the guys’ convention performance, is one for the books, a minimart-set sequence focused on Manganiello is the highlight of the entire film." As great as the dancing and Joe Manganiello may be, there are some clear problems with the film's writing and structure, "Still, even the best routines can’t entirely raise the film from its shambling, directionless feeling, and nothing is nearly as tight as Tatum and crew’s dance moves."

Alex Zalben gets right to the feel-good point with, “Magic Mike XXL, which hits theaters on Wednesday, July 1, is like someone bottled up joy and then sprayed it all over the movie screen." The film also does more than simply entertain, "There’s a sweetness throughout that makes even a dance featuring a woman thrown into a harness while Nine Inch Nails plays come off as nothing but harmless fun. It has respect for its characters, their life choices, and the people who interact with them."

What separates Magic Mike from XXL is the drama, according to Tim Robey, "Cleaving hard to its road-trip formula, it works out less of an honest-to-goodness plot than Magic Mike, but goes even beyond that wonderfully loose, dexterous movie in feeling sexually liberated. It’s more glammed-up, rising above any element of tawdry exploitation, and is more of an outright comedy." Robey sums up the film in a short, sweet way that will rev up its target demo even more, "The bonds between the male performers give it the soap-operatic feel of an XY-chromosome Steel Magnolias."

See you at the movies, Mike.