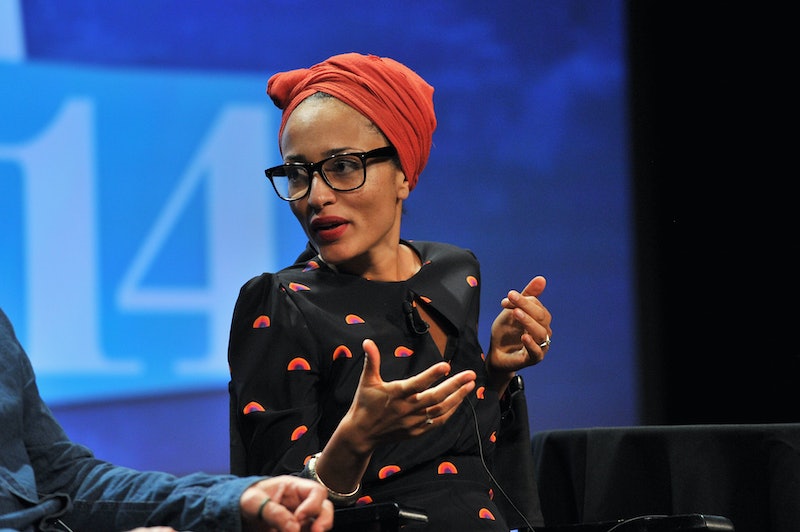 While novelists and screenwriters might fall under the same occupational umbrella, their specific talents often manifest quite differently. Of course, there is the rare breed of storyteller who possesses a tenacity for each end of the writing spectrum: your William Faulkners, your Raymond Chandlers, your Dave Eggers, and now — as we’re no doubt about to find out — your Zadie Smiths. Best known for her debut novel White Teeth, English author and expert commencement speaker Smith is testing the waters of her scripting capabilities, working with her writer husband Nick Laird and director Claire Denis: Zadie Smith is writing a science fiction movie, according to Screen International.

It’d be understandable to entertain a curious, “Huh…” upon hearing said news; though a revered and talented intellectual, Smith’s is not a name you readily associate with sci-fi. Nor is Denis’, for that matter — that the project will be the director’s first English-language movie makes the whole endeavor all the more ethereal. But familiarity with Smith’s work on the page should lend paramount confidence to anything she might contribute to a visual medium. For instance, her first and most celebrated novel, the aforementioned White Teeth — fluid and generous in action, vivid in scene description, and terrifically rich in dialogue — reads practically like a screen story in its own right.

White Teeth's cinematic aspirations are evident from the very first passage, which kicks off in the thick of a pre-sunrise suicide attempt in a London parking lot:

“Early in the morning, late in the century Cricklewood Broadway. At 0627 hours on January 1, 1975, Alfred Archibald Jones was dressed in corduroy and sat in a fume-filled Cavalier Musketeer Estate facedown on the steering wheel, hoping the judgment would not be too heavy upon him. He lay in a prostrate cross, jaw slack, arms splayed on either side like some fallen angel; scrunched up in each fist he held his army service medals (left) and his marriage license (right), for he had decided to take his mistakes with him. A little green light flashed in his eye, signaling a right turn he has resolved never to make. He was resigned to it. He was prepared for it. He had flipped a coin and stood staunchly by the results. This was a decided-upon suicide. In fact, it was a New Year’s resolution.”

Within the first 150 words of her novel, Smith manages everything you’d ask of a movie’s opening sequence. Not only do we undertake a complex image of Archie Jones, one member of White Teeth’s ever-growing ensemble cast, but we can practically “see” the tone — one admittedly bleak, but willing to grin about it — taking form as her sentences unravel.

Though the bulk of White Teeth takes place in the 1970s, ’80s, and ‘90s London, large sequences flash back to Archie and longtime friend Samad Iqbal’s tour through mainland Europe during World War II. Smith’s illustration of the pair’s wartime hardships, particularly those of the quieter variety, aches for delivery to the screen:

“It was a tiny missionary church, converted into a hospital and then abandoned after two months when the sound of shells began to shake the windowsills. Samad and Archie had taken to sleeping there because of the thin mattresses and large airy windows. Samad had taken an interest too (due to loneliness, he had told himself; due to melancholy) in the powdered morphine to be found in stray storage cabinets throughout the building; hidden eggs on an addictive Easter trail.”

But it isn’t only Smith’s heavier material that deserves cinematic showcase. One of Smith’s bounciest chapters characterizes an entire household of new additions to the story, the Chalfen family:

“Fifteen years later and Joyce would still challenge anyone to show her a happier marriage than hers. Three more children had followed Joshua: Benjamin (fourteen), Jack (twelve), and Oscar (six), bouncy, curly-haired children all articulate and amusing. The Inner Life of Houseplants (1984) and a college chair for Marcus had seen them through the eighties’ boom and bust, financing an extra bathroom, a conservatory, and life’s pleasures: old cheese, good wine, winters in Florence.”

Likewise, we can rest easy that Smith has a flare for action. A physical fight between Samad and his wife Alsana early in the novel shows, even with its simplest phrases, tenacity for understanding the rhythms of a fast-paced scene:

“Second round. Samad slapped Alsana. Alsana right hooked him in the stomach and then followed up with a blow to the cheekbone. She then made a dash to the back door, but Samad caught her by the waist, rugby tackled her, dragged her down, and elbowed her in the coccyx. Alsana, being heavier than Samad, knelt up, lifting him; flipped him over and dragged him out into the garden, where she kicked him twice as he lay on the ground—two short, fierce jabs to the forehead—but the rubber-cushioned sole did little damage and in a moment he was on his knees again.”

(It goes on.) And finally, tapping into all discussed elements and then some, we look at the closing passage of Smith’s novel — a funny, bleak, emotional, action-packed set piece that would close the heck out of a well-directed movie:

“So Archie is there, there in the trajectory of the bullet, about to do something unusual, even for TV: save the same man twice and with no more reason or rhyme than the first time. And it’s a messy business, this saving people lark. Everybody in the room watches in horror as he takes it in the thigh, right in the femur, spins round with some melodrama and falls right through the mouse’s glass box. Shards of glass all over the gaff. What a performance. If it were TV you would hear the saxophone around now; the credits would be rolling.”

Needless to say, her style is perfectly suited for the pictures.