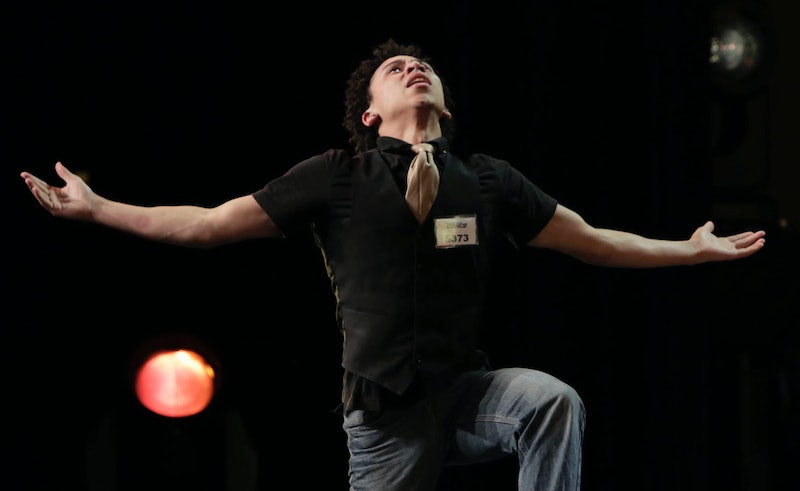 They didn't take Las Vegas by storm, but at least they're an adorable couple. On the first part of So You Think You Can Dance Vegas Week Season 12, engaged couple Kelly MacCoy and Tyrell Noll made it to Las Vegas and promptly decided to get married at a Vegas chapel complete with an Elvis impersonator as their officiant. But while their week began with happiness and so much love, it didn't end that way thanks to SYTYCD' s dreaded solo and choreography rounds.

Now I don't know about you guys, but while MacCoy was definitely an incredibly strong dancer, Noll needed a lot of work. And it looks like the judges were definitely on my side about this when he performed his solo on the first day of Vegas Week. Noll had a few issues in his audition solo about not exploring the space more and not being a little bit bolder with his fascinating style of performance. But unfortunately he got worse during his Vegas solo which had less dancing and more emotion. Emotion is great but when that emotion doesn't go hand in hand with great danceability, whether trained or not, it just doesn't work. Noll needed to do so much better to stay in the competition and he should have realized when Nigel Lythgoe critiqued him during his audition that he had to improve big time.

MacCoy, meanwhile, not only breezed through her solo with a brilliant showing of dance, she also killed it in the contemporary round. By the time Broadway rolled around, she seemed to be on a winning streak that no one could stop... Until she actually performed the dance for the judges. Despite being a standout for choreographer Joshua Bergasse, MacCoy was behind the counts during the Broadway number and her moves were sloppy. Plus she didn't put as much energy and charisma as Broadway routines deserve, especially the one Bergasse gave the contestants. Ultimately MacCoy got cut and was devastated, but found solace that she was going home with her new husband. Thankfully there's always next year.

More like this
Stormi Just Walked A Red Carpet With Mommy Kylie Jenner & Daddy Travis Scott
By Hugh McIntyre
Twitter Is Upset About The 'American Idol' Top 3 Results: "Who TF Is Voting?"
By Jake Viswanath
How 2 'American Idol' Singers Performed With COVID-19 & Made It Into The Top 5
By Jake Viswanath
Sam Ryder Is Ignoring The Eurovision Hype, Too
By El Hunt
Get Even More From Bustle — Sign Up For The Newsletter