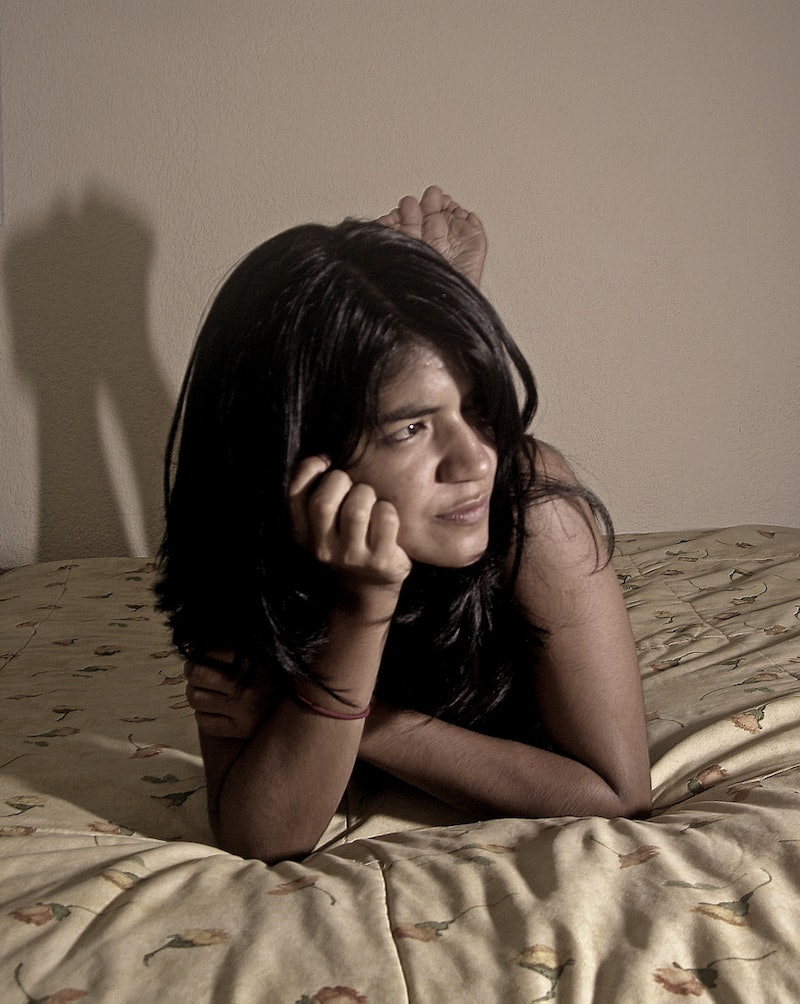 Being honest and staying faithful are major requirements of any relationship, so it's no wonder that cheating is often (but not always) a dating dealbreaker when one partner decides to stray. Not so long ago, it was only possible to be unfaithful and get away with it when your partner was nowhere to be found, but today, there are not only plenty of apps and websites that make it easier to cheat, but also some that are designed specifically for those wishing to have someone on the side. And all that new technology is causing a lot of blurred lines when it comes to what exactly defines the word "cheating." So, figuring how to tell if you're cheating can be tricky.

Finding other people attractive while you're in a relationship is completely normal. Even having a little crush on someone who isn't your S.O. is just fine and dandy, so long as you don't act on it. But there's a big difference between secretly enjoying meetings a little more when you're seated next to your hot coworker and offering to give him a hand job under the conference table. Of course, there are a lot of things that can happen that are not as platonic as "just friends" and not as obviously terrible as "breaking a picture of you and your spouse on your wedding day in the process of banging your secretary on your desk," and that's where a lot of questions start to come up.

While you probably don't have to worry about watching porn while you're in a relationship, what would your partner think if you were receiving nudes from one of your classmates? How would they feel if they found texts between you and your ex explicitly saying what you would do to each other if you weren't in a relationship? And is grinding up on a random stranger while he puts his hands all over you really "just dancing?" Whether it's physical, emotional, or somewhere in between, it's important to know at what point your behavior goes from flirty to f-ed up... and that you put a stop to it before it destroys your relationship.

Although there are widely varying statistics saying how many people are actually unfaithful while in a relationship, Psych Central reports that the chance of being either a cheater or a victim of cheating is about 25 percent in any given relationship. If you're caught in a gray area wondering if you're actually cheating on your partner, ask yourself these simple questions. If you find yourself answering "yes" to them, it might be time to seriously consider if what you are doing would actually be deemed acceptable in your S.O.'s eyes.

1. "Would I never, ever do this if my significant other were right next to me?"

You might think that the way you're interacting with your crush is totally G-rated, but would you still be sending them suggestive messages or touching their hand like that if your partner were standing right there with you? Most of us are a little more flirty around people we're attracted to, regardless of our relationship status. However, if you consistently find that your behavior around this person completely changes whenever your S.O. is around, it's probably because deep down, you know you're probably doing something you shouldn't be.

2. "Is this something that I would consider cheating if my partner were the one doing it?"

We've had it drilled into our heads since we were kids, but the Golden Rule of treating others the way you want to be treated applies just as much when you have an eyebrow-raising relationship with someone other than your significant other. Try to imagine your partner acting the way you are with someone else, and if the very idea fills you with rage, then you're probably crossing a line.

3. "Would I be ashamed to tell an acquaintance about my behavior?"

Lots of us have best friends or family members that would back us up no matter what we did, but the idea of telling a coworker or regular customer that you have a sort-of side piece can be a lot more daunting. If you'd be ashamed to tell someone who doesn't love you unconditionally about what you're doing, then chances are it's not the right thing to do.

4. "If my friend's partner treated her this way, would I tell her to break up with him/her?"

Imagine your BFF telling you that her fiance has been spending an unusual amount of time with a female coworker. She's caught him lying about the times they go out for drinks, and even though she hasn't snooped yet, she knows that she's the one texting him whenever he tilts his phone away from you and smiles a bit. You'd probably tell her to dump his ass, right? Consider your own "gray area" behavior. If you'd tell your friend to dump someone for doing the same stuff, then you S.O. would probably have the grounds to do the same to you.

6. "Do I make an effort to hide certain message exchanges with this person?"

With so many different ways to communicate with each other nowadays, it's ridiculously easy to hide messages we wouldn't want other people to see. And since a 2014 Christian Mingle survey of 2,700 people found that 80 percent of women and 56 percent of men considered online flirting or sexting to be acts of infidelity, it's no wonder so many people are keeping some of their more questionable online interactions secret. Apps like Snapchat automatically delete any messages we send, and plenty of others enable you to delete either snippets or entire conversations. If you're making sure most of your conversations get deleted, waiting to communicate with this person until your partner isn't around, or decide that your phone suddenly needs a password, it's because you know that the types of chats you're having are a bit more than just "friendly."

7. "Is this something my partner and I had previously established was not OK?"

In the end, different people have different definitions of what constitutes infidelity. Some couples are totally fine with open relationships, while others (me included) would consider watching cam girls to be a dealbreaker. It's up to both of you to communicate and respect the boundaries of your relationship. If you cross that line that both of you decided to draw, you don't even need to ask yourself the other questions on this list to know that you were unfaithful.

If your relationship with someone else is so involved that you have to wonder if you're being unfaithful, you probably are. Except for extreme situations involving very controlling partners, most of us are smart enough to know when our moral compasses aren't pointing where they should be. As with most issues, the first step is admitting that you have a problem, and doubting your own fidelity is the first sign that, yes, you do.