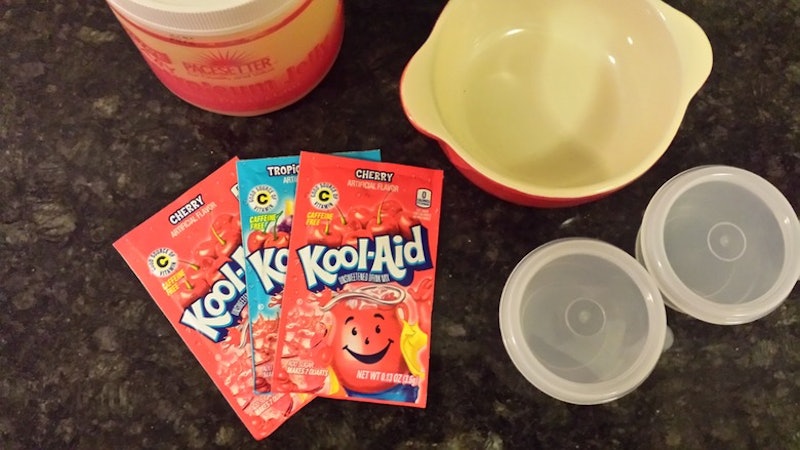 As we all know by now, Orange Is The New Black's ladies of Litchfield prison are pretty darn crafty. They've made beds out of maxi pads and shower sandals, well, out of maxi pads, too. In Season 1, Episode 3 of Orange is the New Black , Laverne Cox's character makes Kool-Aid lip gloss, which made me curious if her recipe could be replicated So, I made Sophia's OITNB DIY prison lip gloss, and it's pretty tasty. And, by that, I mean I was constantly trying to lick my lips, but then I got concerned about the Vaseline-isn't-food thing. Other than that, it did the job, considering Sophia's limited resources in jail.

I did this experiment two ways. The first way was the way Sophia does it on OITNB — straight up dry powdered Kool-Aid mixed into Vaseline with a Q-tip. The second way was the way the Internet tells you to do it when you Google this, which includes only a few key differences — heat and cooling. So, I gathered my supplies — which included a big tub of Vaseline that's been in my apartment forever, Kool-Aid packets (disappointingly, my supermarket only sold two flavors), small plastic containers, and a spork — and got to work. Don't worry, I have photos all along this journey to share with you.

Sophia's Way, As Seen On Orange Is The New Black

I poured the Kool-Aid into small container and then scooped a hunk of Vaseline in there. I have to admit, I was a little grossed out by Vaseline then, after seeing how it gooped up, but I continued. I started to mix the two together, a la Sophia, but hers was more elegant than mine. My mixture looked like a booger in Kool-Aid.

Then it looked like a bloody booger. I know, that's gross, and I'm sorry, but it's for the greater good of beauty, right? The good news is that after a mixing it more, it looked more like something you could put on your lips, rather than what would come out of your nose.

My lips are Kool-Aid Cherry red (I think), but you can still kind of see some powder on my lips from the packet, and I don't think Sophia would approve of that. I'm wearing it as I type this and I trying very hard not to lick my lips right now. Plus, it kind of stings and my lips are burning. I think I'm gonna wash it off now.

The Internet's Way, Adapted from Kelsey Bobian and WikiHow

Step 1: Heat Up The Vaseline

It was time to melt some Vaseline. Most sites instruct you to use a microwave, but since I don't have one right now, I used my oven. At 350 degrees, it took exactly two minutes to completely melt a clump of Vaseline. This is good to know.

Step 2: Mix It With Kool-Aid

Unlike with the first time I tried this, it was much easier to mix together the melty Vaseline and the Kool-Aid powder. A few of the sites also advised to add sugar in order to calm the stinging. Duly noted.

Next, I put these bad boys in the fridge for 45 minutes while I went for a run. By now, I had completely mixed up which one is the Tropical Kool-Aid and which one is the Cherry. Please forgive me.

Step 4: Take It Out Of The Fridge

Once I got back from my run and showered, it was time to try it out! They smelled so nice. (Also note that it looks like the sugar took over one of them. I probably should've done a better job of mixing them.)

Sorry Sophia, I liked this technique better. It was smoother, felt like real lip gloss, and there were no bloody boogers or burning. I still wanted to eat this one, though.

Someone get Sophia a hot plate and a mini-fridge at Litchfield, stat.

More like this
Reviewers Are Obsessed With These 45 Cheap Beauty Products That Work So Damn Well
By Hannah Lynn
42 Things That Make Everyone Look Even Better & Cost Less Than $30 On Amazon
By Maria Cassano
10 Talc-Free Makeup Brands For Safer Eyeshadows, Powders, & More
By Audrey Noble
40 Hair & Makeup Mistakes You Don't Realize You're Making, According To Experts
By Allison Bolt
Get Even More From Bustle — Sign Up For The Newsletter