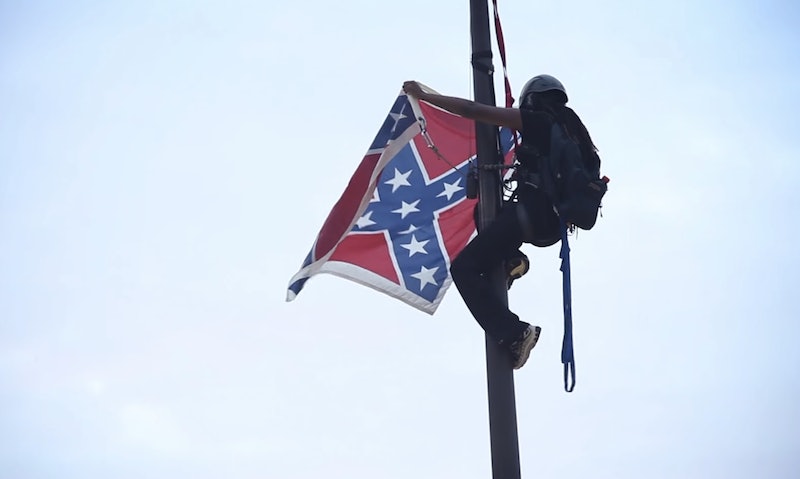 If you haven't already watched the footage of Bree Newsome removing a confederate flag in South Carolina by scaling a flagpole, then stop what you're doing, because this is more important. The 30-year-old activist went all Mulan on the statehouse's ass after they left the flag up, even in light of the controversy surrounding the symbol after the racially-motivated shooting that killed nine people at a Charleston church. Newsome is already regarded as a hero by many for her fearlessness in pulling down the flag even in the face of arrest, but now people are drawing Bree Newsome as a superhero, and it is basically the storyboard for the only superhero movie that will matter to me from this day forward.

Newsome's efforts have already inspired the hashtag #FreeBree, which in turn shed more light on the campaign #KeepItDown, calling for the eradication of the confederate flag. Most brands like Wal-Mart, eBay, and Amazon have already refused to sell products with the confederate flag on them, and although some government entities have also removed the symbol, it is still alarmingly prevalent in the South. (If you need a good laugh to get over your disgust, allow me to refer you to this confederate flag parade that ended with some hilarious karma.)

Newsome, who was jailed immediately proceeding the act of civil disobedience, was met on the ground by cheers that seem to have echoed through the entire internet as her story spreads. "I'm prepared to be arrested," she said, completing the act with a smile. If you haven't seen it yet, here is the footage below:

And here is the moment the flag went down:

People have taken to Twitter and other social media to commemorate the powerful moment with awesomely heroic depictions of Newsome:

Yesterday Newsome released her first statement since the takedown to Blue Nation Review, talking about the importance of this being a collective fight, no matter your background, orientation, or heritage, and her refusal to be "ruled by fear". She emphasizes not just what the confederate flag stands for, but for all of the battles beyond it that have yet to be won:

It is important to remember that our struggle doesn’t end when the flag comes down. The Confederacy is a southern thing, but white supremacy is not. Our generation has taken up the banner to fight battles many thought were won long ago. We must fight with all vigor now so that our grandchildren aren’t still fighting these battles in another 50 years. Black Lives Matter. This is non-negotiable.