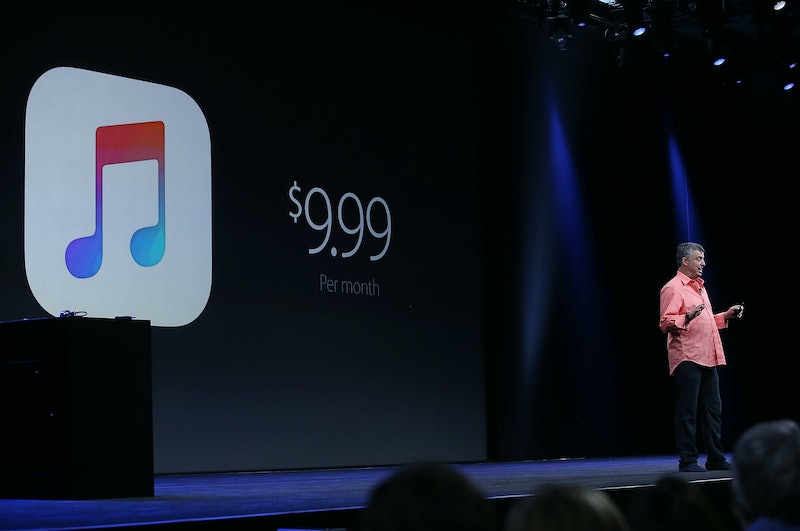 The time is now! The day is here! Watch out, Taylor Swift. Apple's music streaming service, Apple Music, launched on Tuesday, and you can get it for both your Macbook and iOS devices (iPhone, iPad, and if you still have an iPod) simply by getting the software update to iOS 8.4. Go to the App Store, submit to the Software Update, and just like that you'll have access to iTunes' library of over 30 million songs, which will be integrated with the songs you have already purchased on iTunes. Also available on Apple Music is the Beats 1 24-hour Internet radio station, which promises the latest hits and playlists curated by celebs like St. Vincent and Elton John.

Apple Music also has a personalization feature. As soon as you log in, it will ask you what your favorite genres and artists are, and then it will spit out five tabs. First, you will see "For You," which shows playlists curated by Apple based on your interests. The other tabs include "New," which is, um, what's new, and a music cue called "Up Next."

The Verge praised Apple Music for being a successful mix of our favorite streaming services: "Here's Apple Music in a nutshell: it's ambitious," Dieter Bohn wrote, "It borrows ideas from nearly everybody: it has a clean UI like Rdio, a massive catalog like Spotify, a lot of music management buttons like iTunes, and human curation like Beats."

Once you successfully update your software, Apple Music is included automatically. You will get a free 90 day trial, and then, after that, it's $9.99 per month. Time will tell what Apple Music's launch means for rival streaming service Spotify, and the music industry at large, but one thing is for sure: everyone is already obsessed.