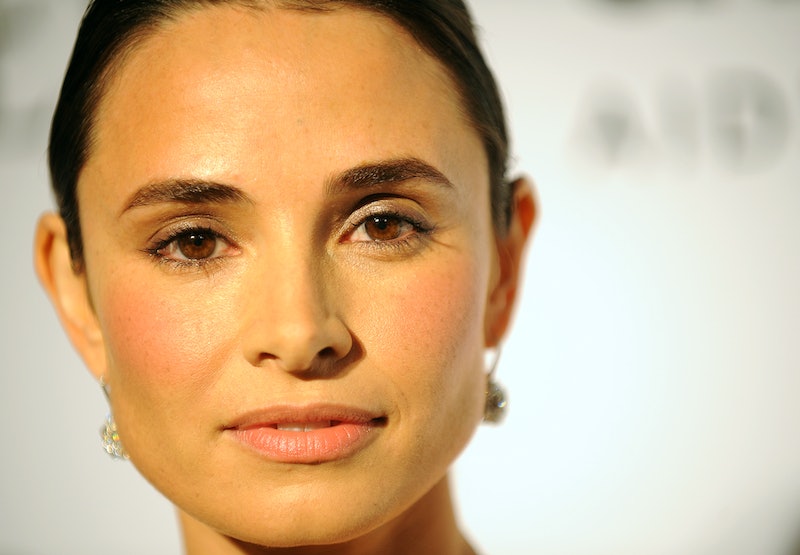 Even though NBC unceremoniously pulled the plug on Hannibal only three episodes into its third season, showrunner Bryan Fuller doesn't plan on ceasing to surprise his Fannibals with Season 3's remaining nine episodes. There are undoubtedly many twists and turns left in store for us as Will Graham & Co. continue their pursuit of Dr. Lecter... and then as the show transitions into its Red Dragon adaptation in the season's latter half. One such surprise is on its way this Thursday. The press release for Episode 5, "Contorno," reveals the presence of a very special Hannibal guest: Mia Maestro.

The 37-year-old Argentinian actress is currently starring on FX's vampire drama The Strain, and is perhaps best known for her roles on Alias and in both halves of The Twilight Saga: Breaking Dawn. Of course, the synopsis stubbornly refuses to disclose exactly who Ms. Maestro will be playing — NBC hasn't released any promotional pictures of her, either — which means it's up to us to scrounge from clues amongst the show's existing storylines and un-adapted characters from Thomas Harris' novels.

Harris didn't exactly pack his Hannibal quadrilogy with tons of strong female characters. Apart from the iconic Clarice Starling and Hannibal's enigmatic aunt Lady Murasaki, women are somewhat hard to come by in the books — so much so that Fuller had to gender-swap a couple roles (Dr. Bloom and Freddie Lounds) just to balance the scales. But, there are a few minor female characters that have yet to make the jump from Harris' page to Fuller's screen.

One such is Ardelia Mapp, Clarice's best friend and fellow cadet at the F.B.I. (portrayed by Kasi Lemmons in Jonathan Demme's classic 1991 adaptation of The Silence Of The Lambs). Obviously, it would be a bit premature to introduce Clarice's best friend before the show even has the rights to Clarice... but Fuller has played fast and loose with Harris' source material before. (Dr. Alan Bloom is a peripheral-at-best character in the novels, who the showrunner has twisted into one of his series' chief protagonists.) Perhaps a new F.B.I. agent will pop up this week, played by Maestro with the name "Ardelia Mapp" as an Easter Egg for the franchise's hardcore fans, but otherwise bearing little resemblance to the Ardelia of the books.

Since the first half of Season 3 is adapting Harris' novel Hannibal, it makes sense to look at that book for clues. One un-adapted character is Evelda Drumgo (played by Hazelle Goodman in Ridley Scott's 2001 sequel): She's a meth kingpin who Clarice shoots down in a drug raid. Clarice is traumatized when it turns out that Evelda was holding a baby at the time she was shot, and Dr. Lecter sends his condolences to his favorite F.B.I. agent, inciting the events of the novel. Again, it would require some twisting on Fuller's part to portray Evelda without Clarice, but it could perhaps be shown in flashback as a foundational moment in the backstory of either Will Graham or Jack Crawford (a la the F.B.I. chief's Season 1 flashbacks to Miriam Lass).

Curiously, Maestro seems to only be appearing in this one single episode of the show. (At least, IMDb doesn't have her listed for any more episodes, and none of the subsequent press releases list her as a guest star.) Given that her presence on the show doesn't last long, it's not unreasonable to assume that perhaps she ends up on Hannibal's dinner plate. It's easy to imagine the exotic Maestro crossing paths with Lecter and Bedelia Du Maurier on their European travels, being lured back to their apartment and... Bon appetit!

The biggest clue to Maestro's character could lie in the phrasing of the press release. It begins with the following proclomation in all caps: "THE SEARCH FOR HANNIBAL CONTINUES — JOE ANDERSON AND MIA MAESTRO GUEST STAR." This could just be convenient positioning of the episode's two cameoing stars... or it could be a hint that Maestro will be somehow involved in Mason's storyline. (Anderson plays the disfigured Verger, taking over for Season 2's Michael Pitt.) Maybe she'll be the vengeful millionaire's beautiful new nurse, tasked with caring for the noseless man while he pursues his vendetta against Hannibal. Of course, Mason already has a private physician, Dr. Cordell (played by Glenn Fleshler, aka True Detective's creepy serial killer Errol Childress), so maybe not.

Even if she's not Mason's nurse, Maestro could still be involved in the Verger storyline. (Spoilers ahead!) If Fuller intends to adapt Harris' Hannibal to its conclusion, then we should be heading towards Mason's grisly demise at the hands of his sister, Margot. In the book, the Verger sister continues to work for her brother after his horrific abuse because she needs his sperm to bear the Verger heir with her partner, Judy. After Hannibal evades Mason's death trap, Margot senses her moment and obtains the desired specimen by sodomizing her despicable brother with a cattle prod. After getting what she needs from him, she kills him by shoving his pet moray eel down his throat. My personal favorite theory is that Maestro will play Judy, Margot's love interest, and will spur her lover to finally take action against her abuser.

More like this
'Bridgerton' Star Nicola Coughlan Confirms Season 3 Will Focus On Colin & Penelope
By Grace Wehniainen and Alyssa Lapid
The Time Traveler’s Wife Book Has A Heartbreaking Ending
By K.W. Colyard
'Derry Girls' Fans May Have An Exciting Spin-Off To Look Forward To
By Olivia-Anne Cleary
The Monster In 'The Essex Serpent' Was Inspired By A Real Local Legend
By Sophie McEvoy
Get Even More From Bustle — Sign Up For The Newsletter