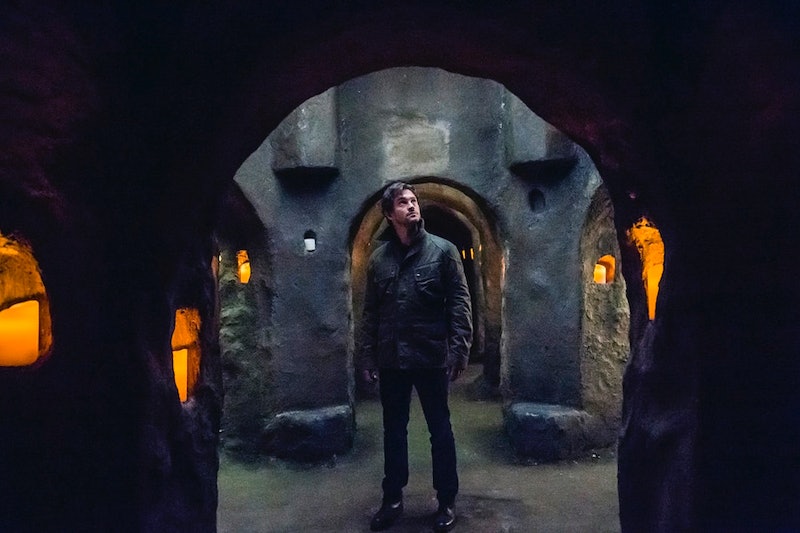 Seasons 1 and 2 of NBC's gloriously baroque drama Hannibal consisted of original riffs on characters created by author Thomas Harris, as showrunner Bryan Fuller devised a prequel of sorts to the first novel in Harris's cannibalistic saga, Red Dragon. If those years detailed the "bromance" between FBI profiler Will Graham and serial killer Hannibal Lecter, then the Season 2 finale was definitively the brutal breakup. Season 3 of Hannibal opened last week with Hannibal on the run, dealing with the emotional fallout of that relationship's sudden dissolution. But seeing as Season 3 is due to finally catch up to the events of Red Dragon, savvy viewers know the good doctor's European vacation can't last. How soon will Will Graham catch the elusive Dr. Lecter?

When Red Dragon begins, Hannibal is already behind bars at the Baltimore State Hospital for the Criminally Insane, so it's not exactly a spoiler to reveal that the show's eponymous character will be apprehended sometime in the near future. The only question is who will catch him, when, and where? This Thursday's episode will be the first of Season 3 to feature Will Graham — he and everyone else from the FBI were absent from the premiere. It's appropriately titled "Primavera," as it's the real first course following last week's appetizer, "Antipasto." (Caution: spoilers ahead!)

Teasers for "Primavera" hint at an impending collision between the hunter and the hunted. A promotional still reveals Will Graham standing in a distinctive cavern-like room surrounded by candles (above). Another shows Hannibal standing in what's very clearly the same room:

Furthermore, the episode's synopsis states that Will "heads heads to Europe eight months after the horrific event that almost took his life, in search of closure with Hannibal Lecter. Following a hunch, Will arrives in Palermo, Italy to find a disturbing gift." We know that Hannibal is currently hiding out in Italy with Bedelia Du Maurier, so Will's hunch is definitely on the right track.

So is that it, then? Has Will caught up with Hannibal already? Not so fast. The synopsis for next week's episode, "Secondo," informs us that Will is still un the hunt: "Will Graham continues his search for Hannibal Lecter, making his way to Hannibal's childhood home in Lithuania." And the synopsis for the following episode, "Aperitivo," states that Jack Crawford "implores Will to abandon the risky idea of finding Hannibal."

How does Hannibal get away if he and Will end up in the same room this week? Well, first of all, we don't even know if they're in the same room at the same time. "Antipasto" showed viewers that Season 3 is relatively relaxed when it comes to the standard notion of a linear timeline. That episode flashed back, forward, and sideways to different times in Hannibal's and Bedelia's lives; there's no reason to believe "Primavera" won't do the same.

Obviously, just because Will fails to catch Hannibal this week doesn't mean the search is over. Not only does Will himself continue his pursuit, but other factions will be on the hunt for the cannibal as well. Mason Verger, who was severely disfigured by the good doctor last season, will make it his sole purpose to find and exact vengeance upon Hannibal. "Primavera" will introduce the character of Inspector Pazzi who, in Harris' Hannibal, is an Italian police officer hired by Verger to locate his prey.

Will and Mason aren't the only people desperate to find the elusive criminal. (I know I already said spoiler alert, but seriously — SPOILER ALERT!) The synopsis for "Aperitivo" also reveals that Dr. Fredrick Chilton, who was previously assumed dead after being shot in the face by brainwashed FBI trainee Miriam Lass, is alive and "now focused on rallying support to capture Hannibal, using Will as bait."

Given that we know Season 3's Red Dragon arc will begin in Episode 8, appropriately titled "The Great Red Dragon," don't expect to see Dr. Lecter behind bars until Episode 7. And who will have the pleasure of putting him there? Mason? Pazzi? Chilton? No, it has to be Will Graham. Not only does this make the most sense in the show's thematic terms, but it's what happened in the book. (Did I say spoiler alert? I think I did.) Obviously, apprehending his arch-frenemy will not be easy on Will. Episode 8 will reportedly pick up after a time jump of many years, a gap during which Mr. Graham found a surprising way to cope with the trauma of his relationship with Dr. Lecter: he got married. Mazel tov!