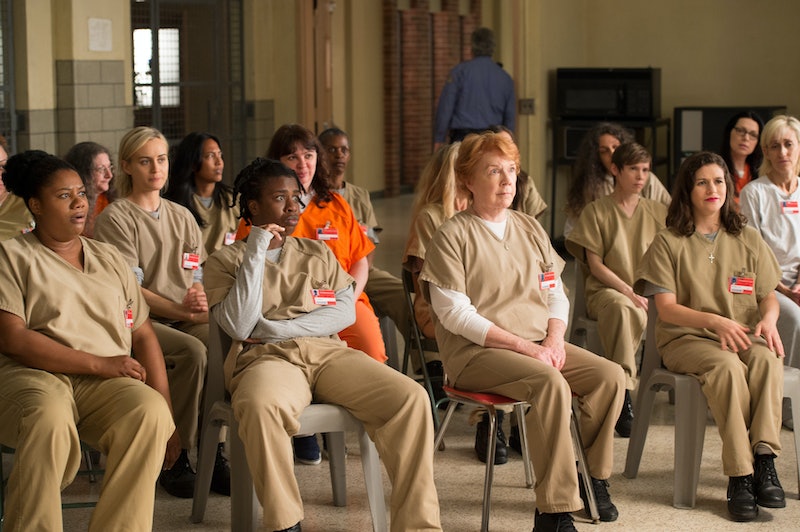 It's been less than a week since I finished Orange is The New Black Season 3, and I'm already experiencing withdrawals. But, when I first started the season the day it hit Netflix earlier this month, I realized something important: I'd forgotten, like, half of what happened in Season 2. Being that it had been almost a year since I watched those older episodes (and even longer since I sat down to marathon Season 1), I had so many questions about the more low-key plot points that were referenced in the third season and had to do a lot of googling. We still have another year to wait until Season 4 hits Netflix, but I've found the solution. It's time to create what the world is lacking: An Orange is The New Black series emoji recap.

Because I get it: With so many other amazing things to watch on Netflix, there's not always time to run through the season again before the new one starts streaming... and, if you're anything like me, you're way too excited for the new stuff to go back and re-watch what you're fuzzy on. And then, of course, there are always those pesky things called Real Life Responsibilities, and as much as I like to ignore them, they have to be taken care of eventually. Hence the emoji recap, which will not only refresh your memory about the important parts of seasons past, but is also pretty exciting on its own, especially if you love emojis as much as I do.

Ready for your OITNB refresher course, emoji edition? Let's do this.

Piper lands herself in prison because of the whole drug smuggling thing she's involved in, and it's obviously not a good time. She misses Larry (for God knows what reason), she realizes that Alex — aka the entire reason she's in this predicament in the first place — is also doing time at Litchfield, and she is generally disliked by everyone, especially Red. Except for Crazy Eyes, of course, because she is her dandelion.

Daya and Bennett end up falling in love... and then Daya finds out she's pregnant, which is a very, very terrible thing considering relationships between COs and inmates are strictly prohibited. Meanwhile, Piper sees the legendary chicken, even if nobody believes her.

Pennsatucky, having recently gone off the deep end, tries to kill Piper and Piper tries to defend herself, but almost kills Pennsatucky in the process.

Piper goes to Chicago to testify against Kubrick the drug lord with Alex... and finds out that Alex basically sold her down the river to get out of prison early. UGH, ALEX, WHY? Piper's shipped back to Litchfield and Alex gets to roam free, which is totally not fair.

Brooke So So arrives and pisses everyone off, because she's way too cheerful for the prison setting.

Someone else pretty important shows up too: Vee, who's revealed to have been Taystee's adopted mom and she starts stirring up all kinds of trouble at the prison and generally making everyone's lives miserable. Of all the villains in the world, Vee is number one.

Suzanne's backstory is revealed, and it's heartbreaking. As a child, she was adopted into a family where they had a biological daughter around her age, and Suzanne was socially awkward and didn't fit in with the other kids — but her mom kept pushing her. Another awesome revelation: She was actually the one who beat Piper up during that fight with Pennsatucky in Season 1, which ended up being the thing that made it look like Piper was definitely just defending herself.

Piper's life quickly begins to suck — you know, more than it already did in prison. Larry and Polly hook up and Piper's furious when she finds out, plus her grandmother dies — could things get any worse? They can, so she has Alex thrown back in prison to get revenge.

Pornstache ends up getting blamed for Daya's pregnancy and arrested — good for Bennett, bad for Pornstache.

And as for Vee? She's killed when Miss Rosa escapes from prison and hits her with the prison van. GOOD RIDDANCE.

Bennett disappears off the face of the earth, which sucks, because Daya has her baby, ends up keeping it, and after a drug raid, we have no idea what will happen to her daughter.

Nicky ends up being sent to Max because her heroin addiction gets the best of her again, and that means no Nicky for the rest of the season.

Everyone's super obsessed with Norma and she ends up accidentally starting her own cult. Everyone loves her, especially when she shows up on Toast. Um, kind of.

Litchfield is sold to a huge prison management company, which means the inmates start eating terribly — leading to many of them pretending to be Jewish in order to get their hands on the way more edible kosher meals. Black Cindy falls in love with the religion, though, and ends up converting at the end of the season.

Another change in the prison's operations: They're now a sweatshop for a panty line, and Piper uses them to sell used panties online through her brother.

Oh, and one word: Stella.

The best part of the season: The happy final lake scene at the end of the season finale, when everyone finds a little freedom as they get to swim in the lake. Until next time, OITNB!