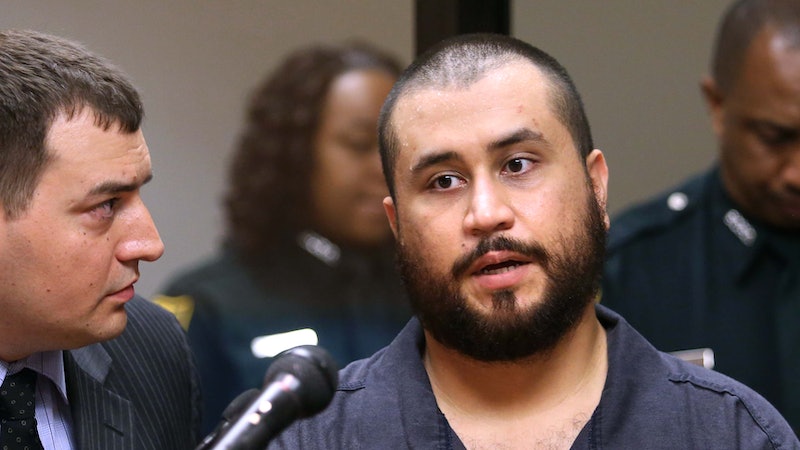 On Tuesday afternoon, George Zimmerman was released from jail after his high-profile arrest for domestic violence. Samantha Scheibe, Zimmerman’s 27-year-old girlfriend, called 911 because he allegedly shattered a table with his shotgun, and then pointed it at her. At his arraignment Jan. 7, Zimmerman will formally face the charges being brought against him: aggravated assault, domestic violence battery, and criminal mischief. We're going to hear more and more about his relationship with Scheibe, but it’s crucial that we make a point to not blame her for being George Zimmerman’s girlfriend.

The Daily Mail ran a lengthy piece on how Scheibe's friends "warned her" about dating Zimmerman, referring to Sheibe as "the pretty blonde [who] has been dating Zimmerman for several months following the breakdown of his marriage after his acquittal for Trayvon Martin's murder." Apparently, some of her "friends" told the Daily Mail things like:

And then you've got the people who took to Twitter to express "surprise" over the fact that Zimmerman even had a girlfriend, and even disbelief that Scheibe might be telling the truth.

But falling into these predictable, victim-blaming tropes is lazy, and more than that, it’s problematic.

When people question Scheibe’s judgments and actions and, in turn, assume she has a role to play in the alleged violence, people distance themselves from any chance of relating to the victim. Making statements like "I'm not like that" and "I would never date someone with a history of violence" reaffirms the notion that "this would never happen to me." It shifts the narrative and focus from the abuser to the abused, and upholds the abuser’s warped justification: the violence occurring is the victim’s fault.

It's important to note that Zimmerman has not been convicted of any crimes, and is legally innocent until proven guilty: at present, it's Scheibe's word against Zimmerman's. Publicly judging Zimmerman is one thing, but Scheibe has done nothing to deserve this kind of judgment.

One in four women report having experienced domestic violence in their lifetime, and about 74 percent of Americans personally know someone who has been a victim of domestic violence. Every day, more than three women are murdered by their partners in the United States. If her story is true, then on Monday, Scheibe could have been one of them.

We don’t know all the details or the inner-workings of Zimmerman and Scheibe's dynamic. Frankly it’s none of our business. All that matters is the fact that Schiebe claims she was abused and endangered — just like so many other women are on a daily basis. This shouldn’t be met with wagging fingers and “I told you so” attitudes.

If Zimmerman did in fact carry out the assault that Scheibe says he did, none of it was her fault. If she's telling the truth, then it was entirely Zimmerman’s choice to make her live through what appears to be a pretty horrifying scene, in which he allegedly pointed a long-barrel shotgun at her head, broke a glass table with his gun, and barricaded her out of her own home. She also claims that he tried to choke her days before the major incident that led to his arrest.

When you place blame on the victim, you take any and all responsibility away from the perpetrator. Which is exactly what happens every time somebody asks what Samantha Scheibe was doing dating George Zimmerman in the first place, or insinuates that she should have “known what was coming."

More like this
Sarah Everard’s Killer Wayne Couzens Is Appealing His Whole-Life Sentence
By Sophie McEvoy
How To Fight For Reproductive Rights, Based On How Much Time You Have
By Courtney Young
The Music Industry Continues To Fail Black Women
By Precious Adesina
Yomi Adegoke On The Offline Diaries & The Power Of Representation
By Jessica Morgan
Get Even More From Bustle — Sign Up For The Newsletter