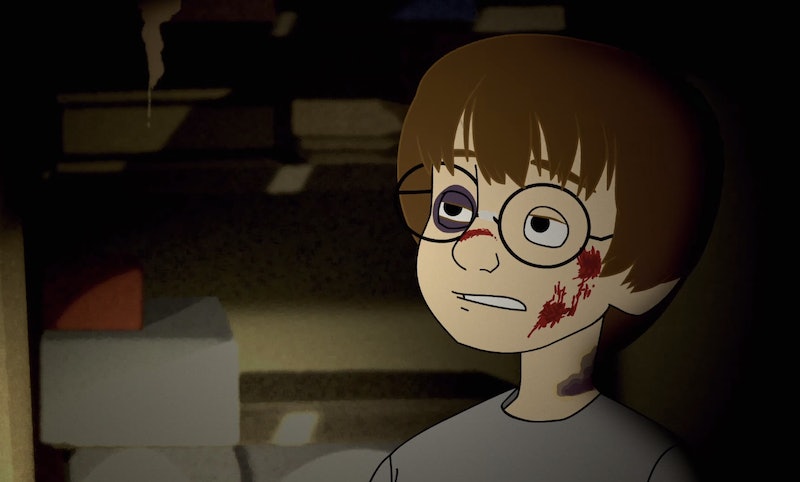 It's Tuesday, and you may not have realized this, but it's also approximately scar-you-for-life o'clock. I feel like it's my duty then to inform you that The Fine Bros. have released a video that explores if Harry Potter were R-rated, because it's guaranteed to scrape that last pesky shred of innocence you had stuck on the floor of your childhood bedroom. (I jest; we all know you lost for good that when you read about Harry Potter lingerie.) Regardless of the current state of your innocence, you're about to get some perspective on just how terrible of a person you are when you laugh at an 11-year-old Harry holding Vernon Dursley down by his shoe and melting the skin off of his face with boiling water.

To be fair, the Harry Potter series was already pretty unafraid to get real. I have some very distinct memories of my 17th year on this planet, sitting on the tile floor of my bathroom and weeping over certain fictional characters I wasn't prepared for J.K. Rowling to murder. But the first installment of the series was pretty tame compared to the rest of the books—or at least it was before these guys got to it. Here are some of the ways the movie would change if it were R-rated, according to The Fine Bros.:

The Dursleys would have been hella meaner

This is that terrifying prequel that J.K. Rowling keeps pretending she isn't writing.

Quidditch would have been a massacre

R.I.P., the only guy on campus hotter than Cedric.

Harry would have gutted a bitch without a second's hesitation

Here's the full video of what might have been in its gruesome, R-rated glory: