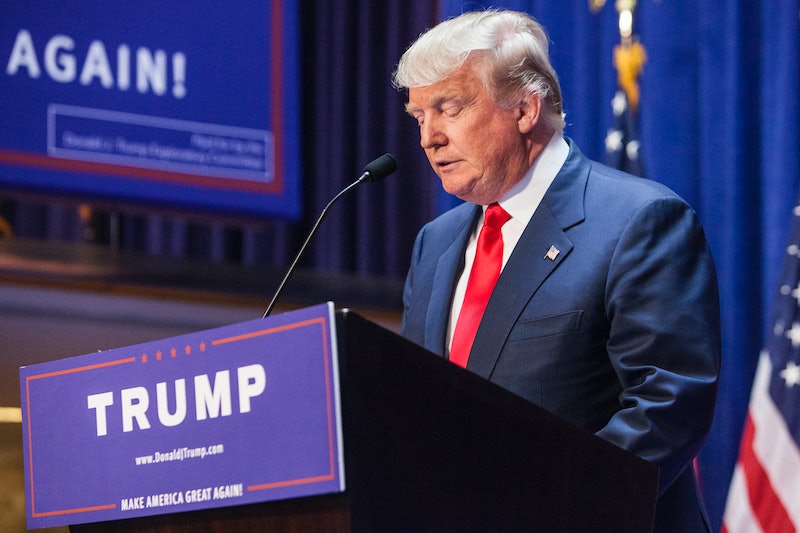 Things aren't looking good for Donald Trump's Miss USA and Miss Universe pageants — leading many to wonder if the Miss USA and Miss Universe pageants will be canceled in the wake of controversy surrounding statements Trump made about Mexican immigrants. Luckily, in the case of the former, the answer seems to be simple: Following Monday's news that NBC ended its partnership with Trump and Tuesday's news that Miss USA co-hosts Cheryl Burke and Thomas Roberts ended their affiliation with the pageant, Deadline confirmed that Miss USA will now be streamed online via the pageant's official website — and a representative for the pageant confirmed through a press release that Miss USA will take place in Baton Rouge, LA in July 2015 as planned. But, will Miss Universe face a similar fate?

As of now, the answer to the latter question doesn't appear certain. Though the pageant could easily be streamed online like Miss USA will be, it seems to have bigger problems: The loss of an entire country. According to CNN, Mexico pulled out of the Miss Universe pageant following comments Trump made regarding undocumented immigrants. As CNN notes, the real estate mogul is a partial owner of the Miss Universe Organization.

Former Miss Universe titleholder Lupita Jones, who helps run Mexico's pageant that determines the country's contestant for Miss Universe, was offended by Trump's comments, as she stated in a tweet Tuesday. "As a Mexican I feel very offended and outraged, like everyone else — as Miss Universe I think Donald Trump is harming the organization," she tweeted. (Translation via CNN.)

Though Trump has not released a statement concerning the future of the Miss USA or Miss Universe pageants, he did respond to NBC cutting ties with him on Monday. In a statement released to Bustle through his representative, Trump stated:

As a Miss Universe pageant statement released to Bustle read, Miss USA will indeed take place in July 2015 as scheduled — but the status of Miss Universe is not mentioned.

"We are disheartened by recent events but the show will go on ... While world politics and other influences will undoubtedly play a role, the pageant will always seek to transcend controversy. It is unfortunate that recent events beyond our control have only served to negatively impact the women who participate in the pageant, our state directors, our sponsors and our fans. We want our supporters to know we remain committed to them and we will be conducting the pageant, regardless of the current situation. We are moving forward, full-steam ahead as planned next two weeks, culminating in the crowning of a new Miss USA on July 12th."

More like this
Where Is Dr. Cline Now?
By Morgan Leigh Davies
10 Times Diana & Meghan Spoke Similarly On The Royal Family
By Sophie McEvoy
Yes, Billboard Queen Angelyne Really Ran For Governor Of California
By Brad Witter
Kim Kardashian Remembers Her Last Words To Death Row Victim Brandon Bernard
By Jake Viswanath
Get Even More From Bustle — Sign Up For The Newsletter