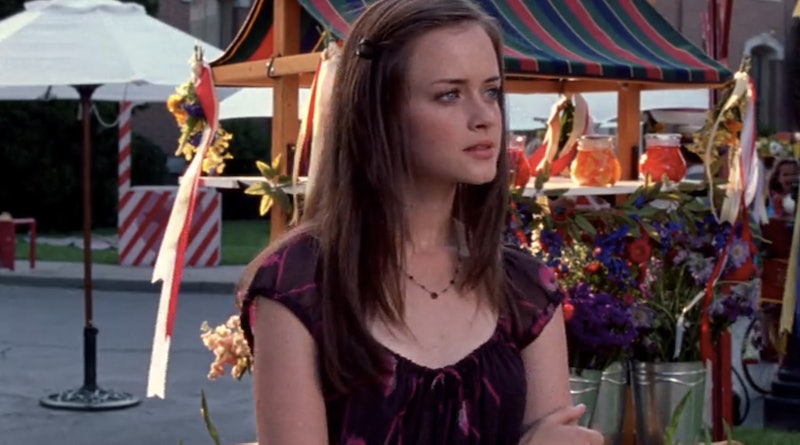 I am happy to watch Gilmore Girls anytime of year, but summertime is the best. I'll admit that something about Gilmore Girls does make it more of a fall/winter show (maybe Lorelai's affinity for snow?) but watching it in the summer is good, too — as long as you know which episodes to marathon first. Although a lot of the show is focused on Rory and school, whether it's Chilton or Yale, there are a certain few that are super focused on what Stars Hollow is like in the summer. Spoiler alert: It makes me want to live there even more. So in case you're looking for something to do when you're trying to beat the heat, don't worry. Spending the day inside with Lorelai and Rory is totally acceptable, and these summer-themed Gilmore Girls episodes will prove it.

Don't get me wrong: Summer is my favorite season, and we should all definitely take advantage of it. I love sunshine, swimsuits, and days at the pool. But, the best thing about summer is longer days for which to spend my time on the couch, watching Netflix. In case that applies to you too, these episodes of Gilmore Girls ought to give you the summer experience without ever having to leave the AC again. The dream!

In the Season 2 premiere, summer's just beginning and Lorelai's engaged to Max. Poor Lane is being shipped off to Korea for who knows how long. Lorelai handing out her thousand yellow daisies to everyone in town just screams summer sunshine, and even though their marriage never actually came to be, their engagement party was actually adorable. Have I mentioned I want to live in Stars Hollow in the summer?

Season 2 was awesome for summer episodes. Since the season started off in the summer instead of at the beginning of the school year like it normally does, Gilmore Girls gave us a ton of this stuff, and "Hammers & Veils" is one of my favorites. Remember having the total freakout that you're not doing enough to get into the college of your dreams? That's exactly what happens to Rory, so she ends up building houses with Paris at the GG version of Habitat for Humanity. Bless Lorelai and the sparkly hammer she sends with Rory as she hops off to the job site.

Warning: The song mentioned in the episode title will get in your head when you watch this, but it's totally worth it. This episode is the Season 3 premiere, and Rory is in DC with Paris for a summer program for student government and in limbo about her feelings for Jess. When she gets home, she chooses Dean... but not for long. #TeamJess

Is there anything that feels more summery than TJ and Liz's Renaissance-themed wedding? I don't think so. Also amazing: Rory packing to move home from Yale for the summer while also drinking a nondescript alcoholic beverage. We've all been there.

Not only is the Season 4 finale an awesome summer episode, but it's probably my favorite Gilmore Girls episode of all time. Rory's home for the summer — aka doing laundry and making mac and cheese in the middle of the night because she's still on her finals cramming schedule, something anyone who's ever gone to college totally understands — while Lorelai's prepping the Dragonfly Inn for a test run. And, if you're as obsessed as I am with this show, you already know that Luke and Lorelai kiss for the first time at the end, and you probably freak out every time.

Obviously, feel free to marathon the entire series while you're at it, not just these episodes. Who needs the outdoors, anyway?