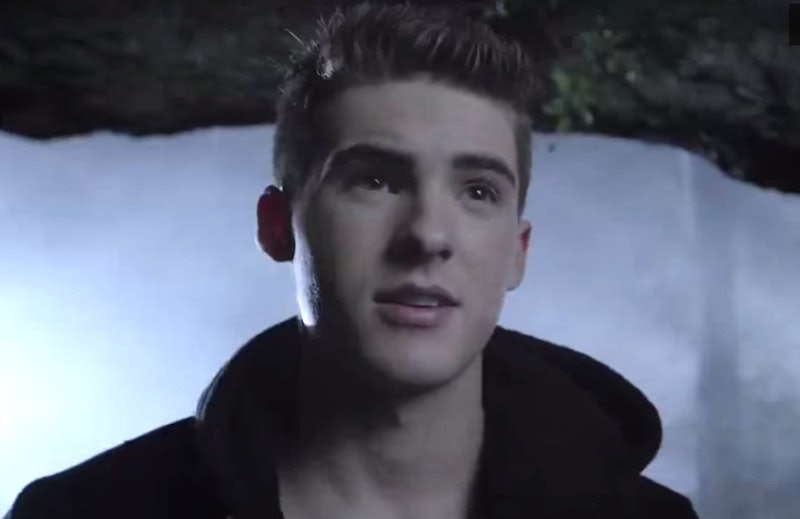 See guys? It always pays to listen to Stiles. On the second episode of Teen Wolf Season 5, "Parasomnia," Stiles revealed his strong suspicion — dare we say obsessive suspicion? — of the recently returned Theo back to Beacon Hills after being gone for almost half of his life. Unfortunately, none of his friends were on board with his theory that Theo was more evil, or at least mysterious, than meets the eye. Scott, the ever trusting pack leader, asked Stiles to give Theo the benefit of the doubt, but Stiles was unable to do so and recruited Liam to help him discover Theo's secrets. Unfortunately, Stiles was unable to find anything concrete aside from two signatures from his dad that didn't match up. However, at the end of the episode, we learn that Theo forced his parents to sign his transfer request to come back to Beacon Hills, and that he can shift into a full wolf. What else is he hiding?

At the beginning of the episode, Stiles tells Malia that he doesn't even believe that Theo is the same one from the fourth grade, but his mind seems to change once Theo reveals things about his past that only he would know. But what is going on with his parents? Stiles believes that his parents aren't actually his real parents, that someone is pretending to be someone they're not. And Stiles is probably right, especially since Theo confronts his dad about not "practicing" the signature enough for it to be perfect. Theo even breaks his dad's fingers so that the signature discrepancy makes more sense.

But if his parents aren't actually his parents, wouldn't someone know when they saw them? Theo couldn't have found dopplegangers of his parents, this isn't The Vampire Diaries. So this whole area of the episode is a big question mark to me. Actually Theo in general remains a huge question mark considering we also just discovered that he can shift into a full wolf.

Before this episode, the only people who could do that are the Desert Wolf, Derek's mom and Derek himself. Is this Theo related to them in some way? Or if my theory is right and he's working with The Doctors, could he have been experimented on and now thanks to those experimentations, he can turn full wolf? It looks like The Doctors are doing some kind of experiments especially considering how they "awakened" Tracy into realizing she was a werewolf. So anything is possible, right? All I know right now is that Theo may not be doing anything outright evil in front of Scott and his pack, but Stiles is right not to trust the guy. The worst thing Theo is doing right now (aside from breaking his dad's fingers) is potentially destroying Scott's pack from the inside out.

He's already created conflict between Scott and Stiles, two people who have been best friends and inseparable since childhood. Stiles got so angry that he punched his car and basically broke his hand. If Scott can be give someone he barely knows that much of a benefit of the doubt, why can't he trust his best friend in the whole world enough to be at least a tiny bit suspicious of Theo? I'm worried about what this guy is already capable of doing, and it's only the second episode. Time to keep a close eye on Theo everyone.