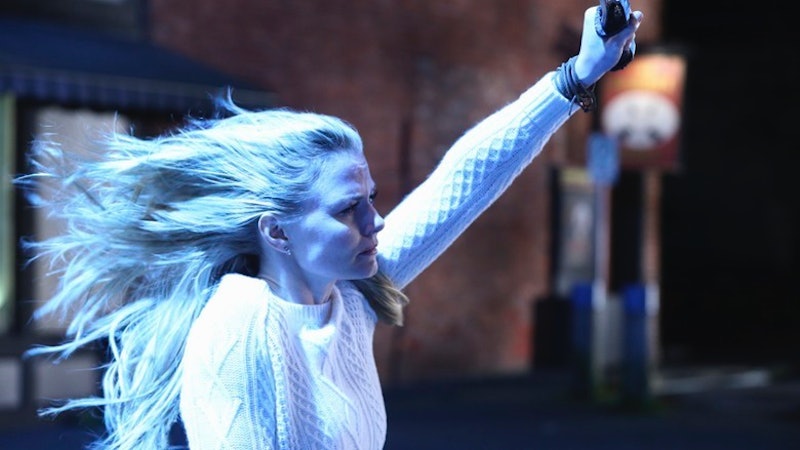 Things are starting to get exciting, guys. While Once Upon A Tim e Season 5 is still a few months away, little morsels are being dropped here and there to get all of us hyped for what's to come, and I can't say I'm not grateful. So far the hints have been relatively minor; we know Lancelot is back, that we'll meet Rumple's mother Evanna, and that Merlin, King Arthur and Guinevere will also be joining the series. We also know that Zelena will indeed be having a baby (though whether or not it'll end up being Robin's, as we've been led to believe, is entirely another thing). But all that aside, we've actually got something a bit more tangible to go on, which also happens to be the best clue yet as to what will be coming our way in September: a copy of the script for the Season 5 premiere.

The copy of the script — well, the cover of the script, anyway — comes courtesy of Mark Isham. If you're unfamiliar with his name, don't worry, he's a behind-the-scenes kind of guy. Isham is a legendary composer for film and TV, and he just so happens to have done the original music for Once Upon A Time since 2011. Isham posted the photo to his Instagram page on Sunday, sending Oncers all a bit crazy, because it's really happening and it's happening soon! But what does it all mean?!

There's not much you can tell by looking at the cover of a script (what I wouldn't give to see inside!), but we at least have a small, albeit obvious, clue about what's going on. It lies in the episode title — "The Dark Swan" — which doesn't take too much thinking to get your head around. It's a clear reference to Emma's turn as the new Dark One, which will no doubt be a focus not only of the season premiere, but of much of Season 5 as a whole. Dark!Swan is something pretty much all of us are looking forward to, if only to see Emma restored to her former Savior self. But is there anything else we can get from it?

Well, not much. We can speculate, of course, but I don't know how much good it'll do us, especially when there are still so many questions left unanswered that the episode title does nothing to answer. One of the big things that's still unknown is where the Season 5 premiere will begin. Will the episode pick up right where the Season 4 finale left off, or are we pushing forward a few months? Are the writers really choosing to go with a seriously dark Emma right off the bat, especially considering the fact that even Rumpelstiltskin wasn't immediately changed into some evil demon when he took on the Dark One's powers? And perhaps most importantly, how dark is dark, anyway?

If we wanted to get really meta about it, we could discuss the significance of "The Dark Swan" title beyond the obvious. Yes, Emma as the Dark One is the biggest storyline, but could the episode title also be seen as a metaphor how big and overwhelming a presence her new identity is, like a cloud hanging over Storybrooke? I'll try not to get ahead of myself, but I seriously can't wait for September 27.