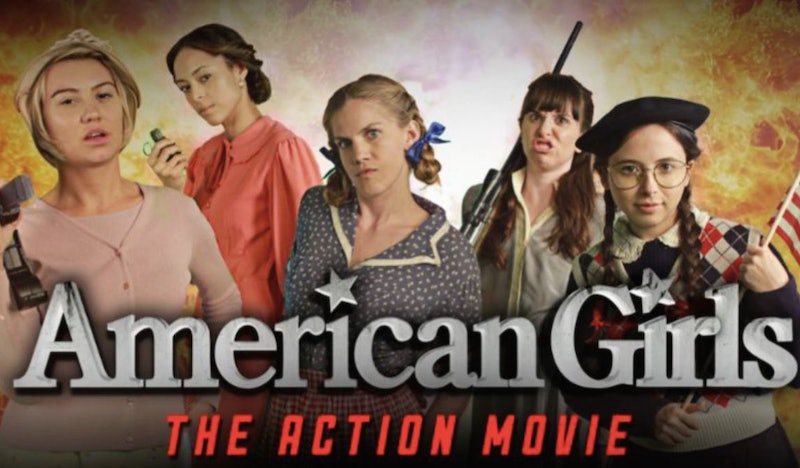 My love for American Girl dolls didn't end at an appropriate age. When I started listening to punk rock at 12, I still loved my AGs. When I began reading Sylvia Plath at 13 (side note: why was no one concerned?), I still had my Kit Kittridge books on the shelves. It didn't matter how alternative and badass I wanted to be: I would always be the kind of girl who loved nice, good old fashioned American Girl Dolls. So this morning, when I saw Funny or Die's "American Girl Dolls: The Action Movie" video, I almost lost it because suddenly my wholesome American Girl Dolls got to be the ass-kicking, feminist role models I was always looking for as a kid. Not that they weren't already ass-kicking, feminist role models — but this parody? Let's just say that it takes it to a whole new level.

The video features five of the older American Girls (many of whom have since been retired): Kirsten, "The Baddest Bitch in the West"; Samantha, "The Original American Sniper"; Kit, "Merciless Mercenary"; Addy, "Fierce Freedom Fighter"; and Molly, "A Real Big Nerd" (because there is definitely power in nerddom). Alongside explosives, fire, weapons, and general badassery, they fight the good fight against their arch nemesis — Barbie. It's an interesting choice, considering that Barbie and American Girl are both owned by Mattel these days, is it not?

The coolest part about the video is that it understands the empowering message that American Girl dolls set out to represent in the first place. The dolls were never hypersexualized like Barbie or Bratz dolls, and they were always setting off on cool adventures, solving mysteries, and generally being positive, contributing members of society. American Girl dolls have always intended to be inspiring to the real girls who own them, which this video pays homage to. It just adds an element of danger and coolness to the mix (because hey, guess what? Female-led movies make more money. Bam!).

Check out the video here, because you'll definitely regret it if you don't:

The video only focused on a few of the American Girl dolls, though, and honestly they left out some of my favorites. So, what would the badass nicknames for the rest of the original dolls be?

Kaya, the gorgeous Native American doll who was a member of the Nez Pearce Tribe, survived exposure to Western diseases. She survived smallpox, so do you think the patriarchy is really going to stop her? Think again.

Felicity Merriman may have been in charm school during most of the Revolutionary War, but that doesn't mean she doesn't know how to fire a musket.

You better believe that Queen J remembers the Alamo, and if you know what's good for you you'll remember that she doesn't like goats. Don't even think about bringing La Reina J near a goat.