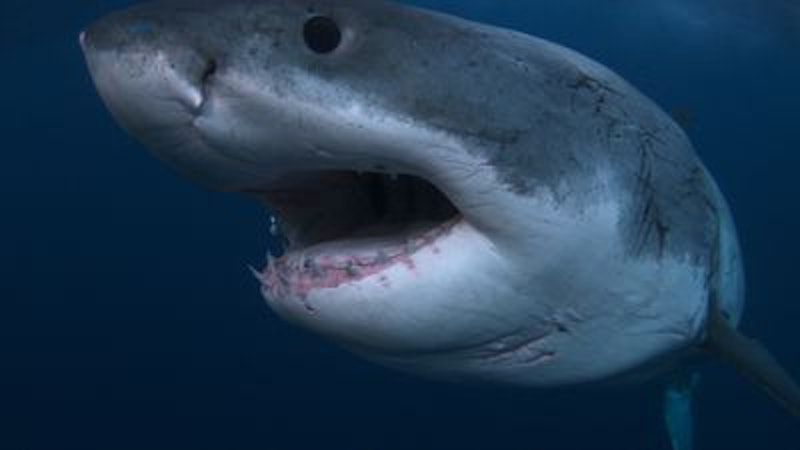 Shark Week 2015 is going to be incredible, like a week-long highlight reel for the most insane things sharks have done over the past year. One of Shark Week's specials is dedicated to the mega shark, which isn't quite a scientific term — think more like the title of a very cheesy monster movie. But, unlike the extinct megalodon, the subject of a faux documentary from Discovery's previous line-up, the "mega shark" is technically a real shark. It's a nickname designed to evoke images of impossibly, mythologically huge beasts, but in reality just describes the biggest and baddest great whites Discovery can find. Yes, the most attention-seeking species has done it again, and taken over the year's most exciting shark event.

Great white sharks are big: On average, they're around 15 feet, and can reach higher than 20, according to the National Geographic. And, their weight can top out at higher than five thousand pounds. That's like, four Priuses. Per shark! It's no wonder that even the smallest of these creatures is literally terrifying. But mega sharks, despite Discovery's insinuation that they're some kind of mythological creature, are just bigger and badder versions of great whites. And, they're going to be all over Shark Week this year, demonstrating why they're always and forever the TV stars of the sea. Look no further than Discovery's Shark Week schedule to find plenty of "mega sharks."

Island Of The Mega Shark on July 5

July 5, the opening night of Shark Week, will jump right in with Island of the Mega Shark, which will follow "the quest to photograph the largest great white shark," as several teams try to hunt down a huge great white on Guadalupe Island.

Return Of The Great White Serial Killer on July 6

This special, which covers a supposed "serial killer" shark, sounds like a classic fabrication/exaggeration, but sharks aren't immune to the survival of the fittest... so logically, the biggest shark might be the winner? Or the killer?

Bride Of Jaws on July 7

There's supposedly an infamous great white female that's nicknamed Joan of Shark swimming off the coast of Western Australia. And, who's there to catch every close up? Shark Week cameras, of course.

Presented as a mystery, the "super predator" was big enough to chomp down on a nine-foot great white — what are the chances the culprit is some kind of mega shark? Very high, I'd say.

The America's Funniest Home Videos of Shark Week, but instead of dads getting hit by whiffleballs, it's all of the biggest sharks of the year.

And, There's More Outside Of Shark Week

Between a basking shark caught in Australia earlier this year, which National Geographic calls "something out of the time of the dinosaurs" to an NBC News report from Massachusetts about a 25-foot long shark spotted offshore, there's no shortage of incredibly huge "mega sharks" that will serve as Shark Week bait for years to come.