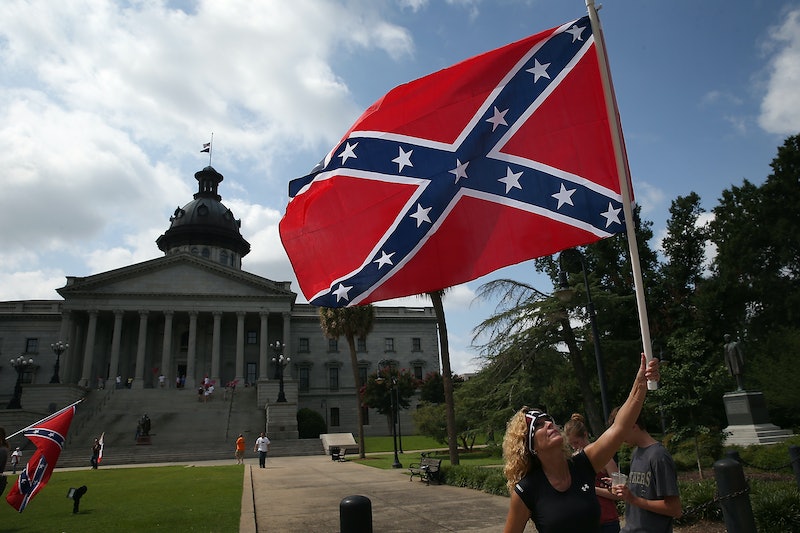 Confederate flags around the U.S. have come down after photos of the alleged Charleston church shooter, Dylann Roof, showed him posing with it and other racist flags while also claiming to be a white supremacist, according to CNN. Removing the Confederate flag is the most recent time Americans have been forced to confront our often racist or exclusionary past. Universities around the country have been renaming buildings that were named after Confederate soldiers, states have considered removing historic monuments tied to racism, and, now, some states are even considering removing religious monuments. Removing these Confederate and religious monuments is great for a few important reasons.

In the last year, both Duke University and the University of North Carolina voted to change the names of two buildings — one named after a white supremacist and another named after a former Ku Klux Klan member. In late June, New Orleans Mayor Mitch Landrieu called to remove a statute of Robert E. Lee, which stands at the center of the city's Lee Circle. He told people that symbols matter and "should reflect who we really are as a people," according to The Times-Picayune. On Tuesday, the Oklahoma Supreme Court ruled that a Ten Commandments monument placed on the State Capitol grounds had to be removed because it violated the Oklahoma constitution, which bans the use of state property for the benefit of a religion, according to Reuters.

Common arguments against these kinds of actions include "You're erasing history!," or "We're not racist anymore," or, in the worst case, "If a religious monument offends a Muslim, then they should leave the U.S." But all of these arguments are either misguided or offensive (and some are both of those things). Here are four reasons it's actually great that we're starting to remove all racist and religious monuments.

Supporting segregation in schools or decades of slavery and abuse for black people isn't something that we should be patting Robert E. Lee on the back for. Yes, it's fine to learn about his role in the Civil War and who he was as a historic figure during high school history class, but it is not OK to make his actions seem heroic or allow them to stand as representations of 'Merica by putting statues of him everywhere. By making a public statue of someone or naming a library after them, we're saying, "Hey, you're cool and probably smart, and we want people to follow in your footsteps and remember you." Unfortunately, we can't put disclaimers on statues that say, "Disclaimer: This person made important contributions to history, but they were also a racist. We're sorry if their racism offends you, but this is American history, so, oh well."

If a statue or a building name needs a disclaimer that apologizes for a glaring human rights violation that that person committed, then we probably shouldn't be elevating their actions in the form of a commemorative statue.

We End Up Protecting Religious Freedom Only For Christians

Anytime we make laws or erect religious statues on State Capitols, we're saying that religion is important to the state and that people of that religion should feel free to worship in that state. At face value, that seems wonderful, but not everyone is a part of the same religion, and U.S. lawmakers often forget that when they favor legislation that allows Christian employers to restrict their employees' healthcare decisions or bills that only allow religious "exemptions" for one type of religion.

The debate surrounding the Ten Commandments monument in Oklahoma is a great example of why this isn't cool, or why it would prove to be a huge problem for a government that claims separation of church and state as one of its pillars. Proponents of the monument argued that the statue was not religious, but, rather, that it was meant to mark a historical event, according to Reuters. So, Satanists and the Church of the Flying Spaghetti Monster both applied for permits to erect their own monuments on Oklahoma's State Capitol that they said marked historical events in their religions. When we favor one religion in monuments, we're saying that one religion is better or more correct than others, which goes contrary to any form of equality or religious freedom. Let's keep the religious monuments in churches or in religion museums.

This is one of the best arguments for why the Confederate flag and other Civil War-era monuments should come down and go straight to history museums. Dave Jamieson interviewed a number of black people outside of Charleston who live close to Annie Caddell, a resident who proudly flies a Confederate flag in her front yard to commemorate heritage and history, according to the Huffington Post. Caddell said that her neighbors know the flag is "not a racial thing," but Jamieson's interviews showed otherwise. Rollins Edwards, a 93-year-old who lives two doors down from Caddell and served as the first black member of the Dorchester County council told The Huffington Post that the flag only comes across as aggressive:

(She said it's) blown over? Nothing's blown over. We don't want nothing to remind us of slavery in the morning. To look over there at that flag, I don't like it. People come by here and stare in disbelief that that flag is flying in this neighborhood.

Black people already face direct discrimination and aggression from other people, and then they are also faced with the "Racism doesn't exist anymore" attitude that is perpetuated by our monuments. Further, the answer to someone saying they don't want to study in a racist building shouldn't be "Well go to a different school," because that is only another passive form of pride-filled aggression.

At some point, we will have people who act on what the symbol does stand for with horrible, violent acts. Or, the symbol's statement will manifest itself in systemic inequality, police brutality against black people, or voting laws that hurt minorities — real, visible harms to a whole population of people.

Racism Will Continue If We Never Try To Fix Anything

I really hate the argument that people who are offended by things need to get a "thicker skin." Most of the things that black people and people of smaller religions or no religions object to are pretty damn warranted. Some of their objections to the Confederate flag, racist historical monuments, and monuments that only recognize one religion include:

"That flag was used as a symbol for the part of the U.S. that seceded from the Union to keep slavery (and all the horrors associated with it). I am black, and flying that flag offends me because it seems to say that the U.S. is still OK with the subjugation, enslavement of, and historic abuse that black people suffered at the expense of white 'history.'"

"I belong to a religion that is not Christianity, and allowing my employer to refuse to let me make certain healthcare decisions will actually have an effect on my health. Monuments that champion this religion seem to embrace those kinds of laws."

In both of these cases, we're talking about pretty tangible harms resulting from "symbols." Symbols that stand for ideas that we don't actually like still stand for those ideas. Even if we scream "It's not a race issue!," it's really hard to believe when we fly racist symbols. Even when we say "The U.S. is great because it's a melting pot of religions and ethnicities," it doesn't override the fact that states often still give funds to Christian churches — and only Christian churches. Racism still exists, and it's on us and the old symbols that we're still clinging to.