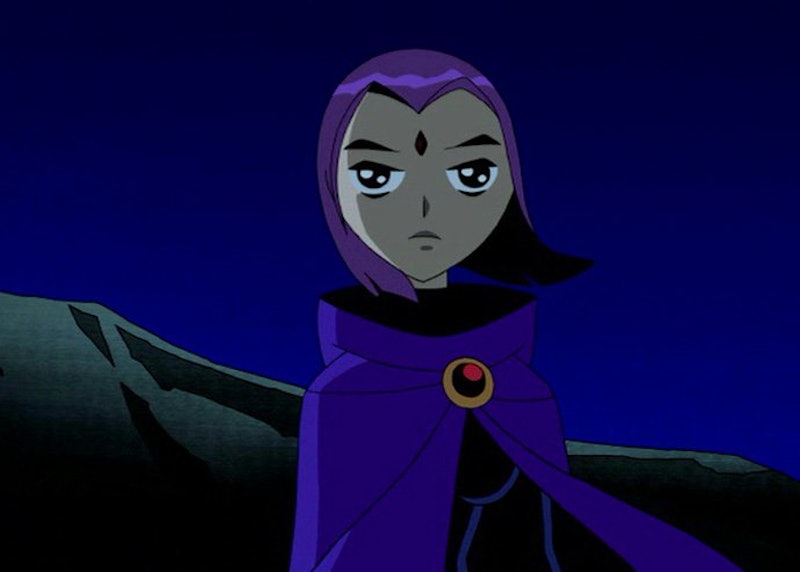 If you were a comic book fan in the early '00s, then you probably at least heard of the Cartoon Network classic cartoon Teen Titans. The show followed the titular superhero group as they fought crime in Jump City, and navigated such teenage problems as first crushes, loneliness, friendship, and feeling misunderstood. But no one embodied that last thing better than Raven, a stoic girl given a goth aesthetic in this adaptation, who struggled with who she was and who she was destined to become. Plus, it didn't help that her powers were tied to her emotions, so if she ever stopped being stoic, she could cause quite an incident. Despite such a volatile introduction, I still can't help but feel that Raven would have made a great Teen Titans leader. I mean, not that Robin didn't do a good job, but she could have done just as well.

The Titans were made up of Raven, Robin, Starfire, Beast Boy, and Cyborg. Of those five, Robin was the only one who was lacking in actual superpowers, unless you count being trained by Batman as a superpower. (It totally counts. TOTALLY COUNTS.) It was likely because of his status as a badass normal — trained by Batman — that Robin got the prime position of being the leader of the group, but he and Raven had a pretty tight friendship. You know why? Because they were both rational and level-headed and overly serious and leaders.

But don't take my word for it. Just check out these totally logical reasons for why Raven should have led the Teen Titans below.

1. She Was Robin's Number Two

Robin's best friend might have been Cyborg, and his true love might have been Starfire, but he and Raven were the Team Parents. They were both no-nonsense disciplinarians who understood each other better than anyone else could, and it was clear that they had each other's backs no matter what. Basically, if Robin ever had to step down as the leader of the Teen Titans, he'd probably pick Raven as his replacement in a heartbeat.

2. She Kept A Cool Head Always

OK, not always, but she was stoic, not dead inside! While Raven was no stranger to losing her temper — especially when Beast Boy was around — most of the time she was cool as a cucumber, and the only one in the room who could tell it like it is and see things as they are. When Robin was hallucinating Slade everywhere, it was Raven who went inside his head, and helped to heal his mind.

3. All The Villains Were Afraid Of Her

Although, can you blame them?

4. She Tried To Do Everything Alone

A key component of every leader is the erroneous belief that every problem that happens is your burden to bear, and that to rely on others is weak or troublesome. Robin fell into that trap many times in the series, and Raven was no different. They both needed to learn that relying on their friends was a different kind of strength, and that bottling things up made them worse, not better. I'm not saying that is a perfect trait for a leader to have; it's mostly just a common one.

5. She Could Have Been Trained By Batman, Too

Seriously, Robin and Raven were so much alike that I'm pretty sure Batman would have loved her. If she ever wanted to head to Gotham, and take up her rightful place as one of the Batgirls, she'd fit right into the dysfunctional Batfamily. She has worn Robin's uniform and mask before, so it's not like this would be a brand new thing for her. If that's a requirement for leadership, then bring it on.

6. She Was The Most Mature Member Of The Group

7. She Was Also The Smartest

When she wasn't meditating, Raven could usually be found reading. Sure, Cyborg is part-machine and part-man, which means that he has access to the Internet and the means of instantly downloading anything he needs to know, but Raven puts the work in to read everything she can get her hands on, especially gothic fiction and spellbooks, making her the smartest person on the team second to, say, Robin. You know, the leader?

The Teen Titans flourished under Robin's guidance and leadership, and Raven was often too apathetic to really take the initiative in most situations, but, if the chips were down and the Titans needed someone to turn to, there's no doubt that person should be Raven. There's a reason she was the favorite character of many a Teen Titans fan, even if she was drastically different from her comic book counterpart. In essence, Raven rocks.