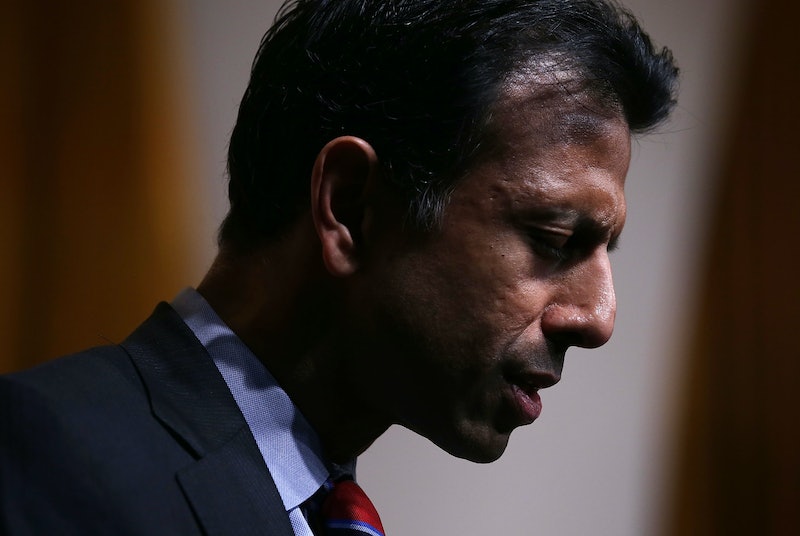 Bobby Jindal's presidential campaign roll-out has been off to a rather haphazard start ever since he announced his candidacy last week. He kicked things off by unveiling one of the most mocked logos of all candidates on either side and staged a creepy closed circuit-captured talk with his wife and kids to let them and the world know he has his sights set on the White House. The whole thing felt like a bit of a joke. So, what campaign piece is next for the highly unpopular governor of Louisiana? A motto — "Tanned. Rested. Ready" — which is both insulting and not exactly original. It turns out that Jindal stole the campaign slogan from Richard Nixon's ill-fated and nonexistent 1988 comeback. Seriously.

Jindal would've been just 17 years old at the time; a young Republican indeed. Perhaps he was impressed by Nixon's post-presidential diplomacy efforts, which must have factored into all that Nixon support. According to a New York Times article from the 1988 Young Republican National Convention, the GOP youth were all incredibly supportive of Nixon despite it having been nearly a decade and a half since his presidential resignation:

Sure, Nixon had plenty of time to get some sun, relax a bit, and prepare for anything his heart desired after flying just under the scrutiny of the public eye for years following a controversial presidency but Jindal is actually still governor and has been for nearly two terms. It's incredibly insulting to the people of Louisiana for Jindal to insinuate he's done nothing since taking office in 2008 but also — at least to someone who's had to suffer with Jindal at the helm of their respective state and watch him pummel it into the ground — pretty accurate. According to his campaign spokeswoman, Shannon Dirmann, the "Tanned. Rested. Ready." slogan is a bit of a joke, much like Jindal's political career.

Dirmann tells the Times-Picayune that Jindal's rested because he gets six hours of sleep per night. She's mum about how tanned he is, however. Further statements from Jindal campaign manager Timmy Teepell ignore the joke of the slogan altogether and instead attack the "liberal media" for thinking the presidential hopeful isn't "brown enough." If Jindal's own campaign workers appear to consider what they're doing a joke then maybe he's not all that ready to run for president anyway.