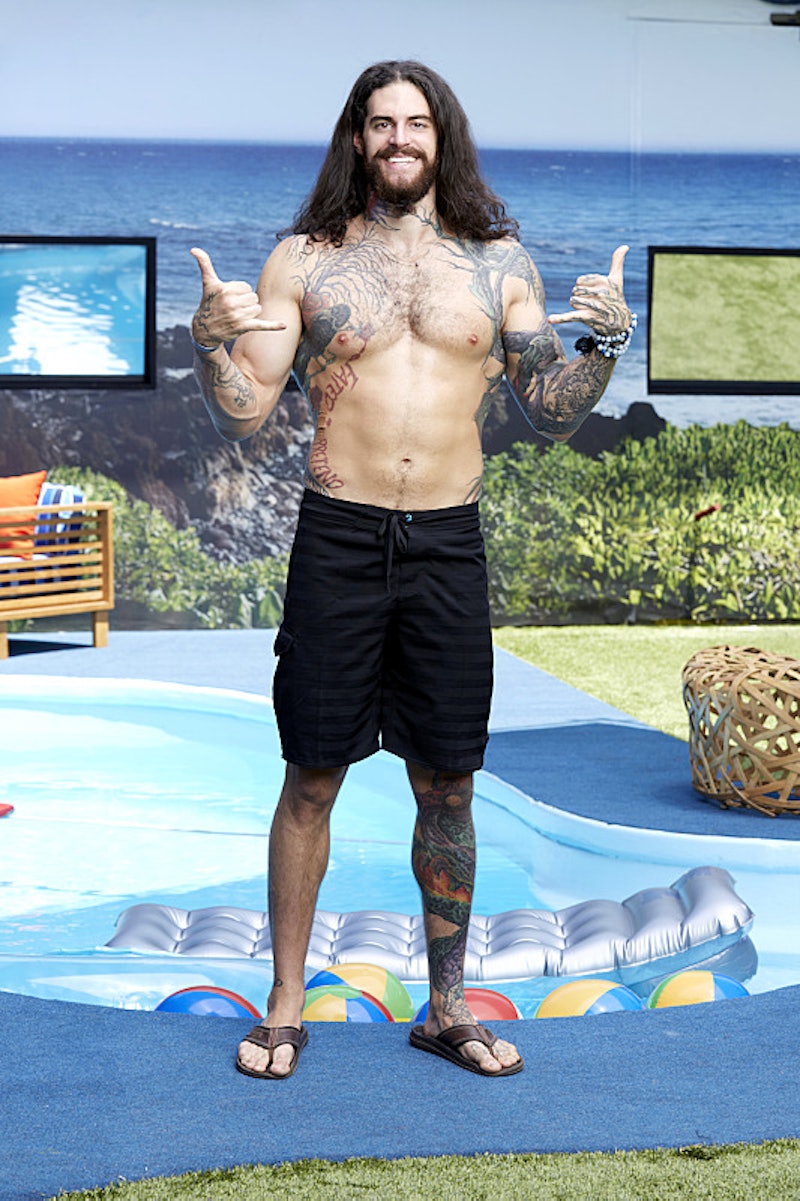 During the first few weeks of Big Brother 17, we've been getting to know the contestants in this edition's camera-covered house who are vying for the $500,000 grand prize. Last week, Jace was the first person in the house to get evicted, meaning it's time to get to know the other residents a little better — both in personality, and in looks. So it's time for a guide to Austin Matelson's tattoos, because I think we should all take a closer look at the contestant's body art and appreciate it's grand epic-ness now.

Austin has the full-on edgy dude look going on: Long hair, beard, a buff torso, and tattoos seemingly everywhere on his 6-foot-5 frame, plus he used to be a professional wrestler and he has an alter ego named "Judas" (uh oh). But don't let all of that fool you about this guy — he's also got a masters degree in medieval literature, enjoys yoga, and some of his tats seem to have a deeper meaning than just regular tough guy stuff. There's even one that must be covered with a band-aid — not because it's dirty, but the tat is lyrics to a song that CBS doesn't have the rights to show.

What are those lyrics? And what are the rest of those colorful tattoos? Come along with me and we take a journey through Austin's body art.

The one thing that stands out about this tat is how red it is. Now, it being in the neck area kind of makes me think: red + neck = blood-sucking vampire theme. But I'm not sure that fits in with the rest of the tats and their theme. Upon closer examination, it very well may be a rose or rose-like image.

I think those look like little flowers, along with roots that reach his hand.

Right Side (Under the Band Aid)

So what's the mysterious tattoo under the band aid that CBS doesn't dare show? It's the phrase "Fated to Pretend," which is the lyrics and song title of a popular tune by the band MGMT in 2009.

The tattoo itself is surrounded by roses, roots, and what looks like a big crow with a rose. Is the crow putting up a false front with the rose? Hmm.

I have several guesses on what this very large body art could be:

There's also a big red cross on his inner arm and it probably relates the left side's theme, whatever it may be.

Austin's back seems to bring the whole shebang together. The back tat has the roses on the right mix and mingle with the thorny vines on the left to create one tangled web. So are these tats a statement about life, that beauty and pain are often tangled together? Like the song goes, "every rose has its thorn."

This looks like it's a continuation of the roots/thorns/stems of Austin's left side and arm.

But are there tattoos in the places we haven't seen? I guess we'll have to wait and see if CBS lets us take a peek or if they show up in the feeds.