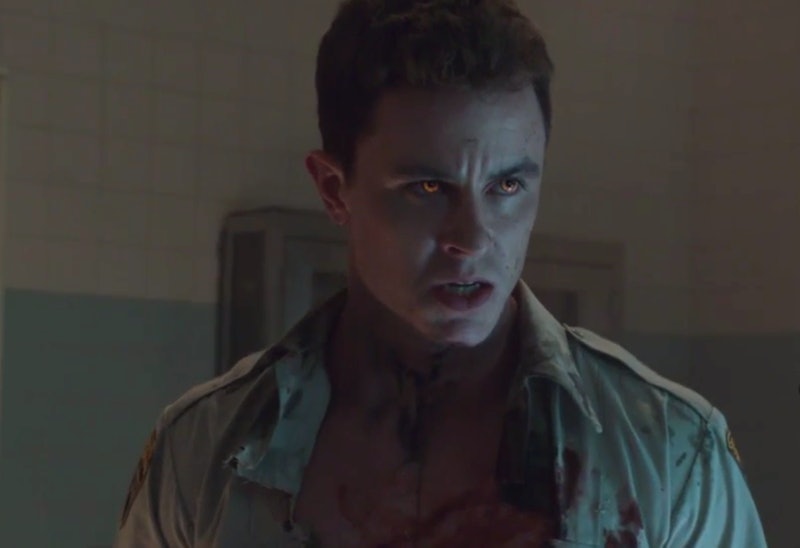 When it comes to Teen Wolf, the supernatural identity of Parrish is the biggest question on my mind, and the issue that really keeps me up at night. Series creator Jeff Davis promised in an interview with BuzzFeed that we will find out what Parrish is in Teen Wolf Season 5, but at this point, it seems like he can really only be one thing. Parrish has to be a phoenix. All signs just point in that direction and it's hard to imagine a supernatural creature that fits him better. But this is Teen Wolf, where the writers are known for throwing us for a loop over and over again. It's entirely possible that Parrish is something different — something just as interesting that potentially brings him much closer to Scott's pack. Now hear me out: I think that Deputy Jordan Parrish is a weresalamander.

I know what many of you might be thinking: WTF? And yes, the theory and term might be completely off-base. But this is a show that turned Jackson into a lizard with venom that could paralyze people, and was controlled by being a bit afraid of drowning. So obviously anything is possible on this fantastical, wonderful series.

So what is a weresalamander? It's exactly what it sounds like. Much like Scott is a werewolf and Malia is a werecoyote, Parrish becomes part salamander. Don't laugh guys, the theory works in many ways. Salamanders in supernatural lore are cold-blooded creatures that can withstand tremendous heat and fire. They're also noble, loyal creatures with hearts of freakin' gold. Sound like any young, friendly police officers we know?

Plus, Parrish's dead pool price in Season 4 was very high, which could suggest that he is a unique creature. A weresalamander seems pretty special to me (though admittedly, so does a phoenix).

Another possible theory is that Parrish is just a fire kitsune, since Jeff Davis said on an episode of Wolf Watch that kitsunes were his favorite supernatural creatures to explore. But that's not nearly as exciting, as it makes Kira less unique, and I love that the women of the show have more unique abilities and supernatural identities than the men. I think Teen Wolf should keep it that way.

However, if the phoenix theory is true, there is another facet that could also be possible. When phoenixes are resurrected from the ashes, they start out as a new bird, almost like they have a different identity or have been reincarnated. Perhaps Parrish could have been Isaac Lahey's brother Camden, and was killed then resurrected without the memory of his old life. That's why he was drawn to Beacon Hills, because of his brother and his father, and that's why he doesn't understand his identity. Whatever Parrish is, can we figure it out quickly please? I'm getting impatient here!

More like this
The 'Nope' Ending, Explained
By Morgan Leigh Davies
The 'PLL: Original Sin' Creators Say A’s Identity Will Be “Very Clear” By The Season Finale
By Alyssa Lapid
'The Sandman’s Ending Is A Departure From Neil Gaiman’s Comic Book Series
By Kadin Burnett
Every Horror Movie Reference In The 'PLL: Original Sin' Premiere
By Alyssa Lapid
Get Even More From Bustle — Sign Up For The Newsletter